Are malnutrition figures in India exaggerated? Experts debate the WHO formula 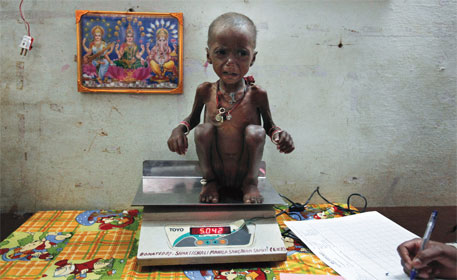 This defies logic. Despite rapid economic growth, India has often been placed below sub-Saharan African countries that have very high number of malnourished children. But the government has no data to clarify its position. In the first week of September, Parliament’s Committee on Estimates criticised the government, saying: “The committee is surprised to note that in the modern era of Information and Technology, there is no recent official data on malnutrition. What is available is the outdated National Family Health Survey-III data of 2005-06.”

But efforts by experts to generate reliable malnutrition data in the country might go in vain due to raging debates over the way malnutrition is assessed.

The debate was sparked by an article by Arvind Panagariya, economist at Columbia University, US. In the article, published in Economic and Political Weekly in May this year, Panagariya compared several indicators of development and established that India has made significant progress in realising several development goals but lags in malnutrition. This mismatch could be due to a faulty formula of the World Health Organization (WHO), which is used to measure malnutrition among children in the country, Panagariya wrote. The formula uses height and weight as yardsticks to measure growth. Panagariya argued that the height of an individual can vary depending on the nutrition status as well as genetic makeup. For instance, Indians are not genetically programmed to be as tall as WHO expects. But the WHO formula does not take this into account.

Panagariya is not the only one to have criticised WHO’s malnutrition measurement formula in the recent months. In July, economist Reuben Abraham, who is the executive director of the Centre for Emerging Markets Solutions at the Indian School of Business in Hyderabad, and a non-resident scholar at New York University, argued in a news daily that malnutrition is a multidimensional phenomenon. It should be categorised into protein deficiency and micronutrient deficiency, and diagnosed only through medical assessment.

Several health experts have also expressed doubt over the WHO formula. “How can one formula fit the entire world?” asks Umesh Kapil, professor of human nutrition at the All India Institute of Medical Sciences (AIIMS), Delhi.

But India was among the six countries that were part of the WHO survey while preparing the formula (see ‘Just for reference’). This means the formula should work well for India.

Kapil explains why WHO’s formula fails in India. Using the formula, WHO measured the growth of a handful of children born and raised in the best settings and standardised the growth chart. But it is impossible for all children to have similar growth. India is a vast country with individuals belonging to many ethnic groups. In certain communities, people are of short stature. This does not mean they are malnourished, says Kapil, emphasising the need for separate formula for each community.

Many health experts and activists say the debate is uncalled for. “The WHO formula tells us the ideal size of a child. So there is no harm using it in the Indian scenario,” says H P S Sachdev, senior paediatrics and clinical epidemiology consultant at Sitaram Bhartia Institute of Science and Research, Delhi. “There might be genetic differences but we assume that given the right facilities, all populations grow in a similar way,” he adds.

The average height of the Chinese youth has increased by six centimetres in the past 20 years. The height of the Japanese also increased between the 1960s and the 1970s. This is the time when China and Japan experienced economic development. Cut to India. If genetics plays a crucial role in malnutrition, why is there a wide gap between the nutrition status of children in Chhattisgarh and those in Delhi?

The 2004-05 National Family Health Survey report pins the disparity on socio-economic gaps. The report says financial conditions of families directly influence the food intake and thus play a significant role in the growth of children. The report reveals that six of 10 children living in the poorest households are stunted and almost as many are underweight. The report further establishes that lack of nutritious food is not the only reason for malnutrition. There is an inverse relation between malnutrition and other issues like mother’s education and sanitation.

A blog published in web-journal riceinstitute.org/wordpress on April 8, 2013, shows mother’s social status can also result in malnutrition among children. Reetika Khera of IIT-Delhi and Diane Coffey and Dean Spears of Princeton University in the USÃ”Ã‡Ãªconducted a survey in rural India. They concluded that children of younger sons in a family are shorter than those of elder sons, even though they live in the same household and are exposed to the same environment. This is because wives of younger sons usually experience lower social status within the household, for instance they have less decision-making power, meaning they have no control over food.

“We must understand that non-food factors, such as water, sanitation, healthcare and the height of father, play significant roles in the development of children,” says Sachdev. “Creating a new formula or reference for all subgroups without understanding these factors will further confuse us,” he says.

Activists allege that people who are advocating changes in the WHO formula have vested interests. Sachin Jain of Bhopal non-profit Vikas Samvad, says Panagariya wants to prove that the open economic model India adopted 20 years ago is perfect. Advocates of this model have managed to fabricate statistics of poverty and other development indicators to prove that the model is effective. Now they are trying to change the malnutrition formula, Jain adds.

Commenting on Panagariya’s article, Dipa Sinha, an activist with the Right to Food Campaign, says there are attempts to medicalise the malnutrition problem. These people demand to shift focus from malnutrition to micronutrient deficiency. They advocate medical checkup of each and every children to assess whether they are malnourished or not.

They want to deal with the deficiencies using medicines. These measures will only benefit the private healthcare sector. “We strongly believe that the chronic malnutrition of our children could be removed by providing them healthy food, including milk and eggs,” Sinha suggests. Vandana Prasad of the National Council for Protection of Child Rights, concurs. Malnutrition is a complex issue.

The focus should be on intervention measures to eradicate malnutrition from society rather than discussing the right formula to assess it, she says. “Even if one changes the formula and manages to reduce the number of malnourished children by a few percentage, say 5-10 per cent, what purpose will it fulfil?” asks Arun Gupta, regional coordinator of Breastfeeding Promotion Network of India. “We would still require interventions to check the prevailing malnutrition in the country,” he says. Instead of arguing about the right formula, economists should throw light on why problems such as lack of drinking water, sanitation and healthy food persist after so many years of adopting open economic policy, Gupta says.

When Down To Earth contacted Panagariya, he said, “The Economic and Political Weekly recently devoted an entire special issue for critical scrutiny of my paper. I am now preparing my response to these critics.”