The threats from aerosols are all pervading 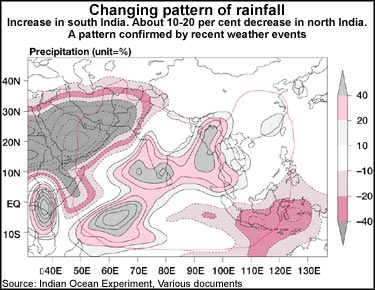 Aerosols may be reducing rainfall and threatening the Earth's fresh water supplies, according to the Scripps Institution of Oceanography, San Diego. "Initially we thought that aerosols were mainly a cooling agent, offsetting global warming. Now we find that these have a big impact on the water budget of the planet," said Scripps professor V Ramanathan, in a study published in 2001 . Based on satellite data from nasa and indoex, scientists have found that tiny particles of soot and other pollutants are affecting the planet's hydrological cycle far more than previously understood. The indoex findings are limited, because they are restricted to the dry season, from December to April. Scientists want to now study how the solar heating in the haze affects the monsoon rainfall. But what they already know, should cause us to think hard.

While tiny particles suspended in the air are essential for cloud formation, if they are too many in number, it may adversely affect rainfall (see box: Heavy cloud). In polluted areas in Thailand and Indonesia, clouds do not precipitate due to very small droplet size, whereas they precipitate in less polluted areas within about 10 to 15 minutes after their formation.

According to the indoex models (gcm-fo and gcm-mo), the haze causes a 1-2 per cent decrease in tropical average evaporation and precipitation, depending on the season. Model simulations also show that the haze causes significant redistribution of rainfall in the indoex region. While some regions experience as much as 20-40 per cent increase, others suffer comparable decreases (see map: Changing pattern of rainfall). For instance, gcm-fo shows haze leading to a large increase in rainfall over southern India with a large decrease in winter rainfall over parts of northwest India, Pakistan and Afghanistan. Areas over the western equatorial Pacific are also getting dry.

Effect of particulates on cloud properties could also be influencing the arrival of monsoon and its distribution in India, according to Mitra.

"Observational evidence about decrease in the size of cloud droplets with increase in aerosol amount, and decrease in rainfall over the Sahelian region correlated with the increase in dust, show without doubt that aerosol has a strong influence on clouds and precipitation," says A Jayaraman of Physical Research Laboratory, Ahmedabad, who has studied the effect of aerosols on monsoons. "If it can happen in other parts of the world why not over India? The problem is that we do not have observational evidence," adds Jayaraman. "Some scientists may argue that the monsoon is such a strong system and nothing can happen to it. But we should not forget that our pollution is also equally strong."


In 1995, a report published by the Intergovernmental Panel on Climate Change (ipcc), an international body of scientists, recorded some aerosols as having a cooling effect. Since then understanding of aerosol impact have undergone a sea change. By 2001, ipcc had gathered enough evidence to support the case for aerosols having a warming effect. Warming due to black carbon aerosols may, in fact, balance the cooling effect of sulphate aerosols -- the single largest contributor to cooling by particulates. The proportion of light scattered by aerosols to that absorbed determines their warming or cooling influence.

At the same time, aerosols reduce the heating of the Earth's surface as they decrease the amount of solar energy reaching the surface by absorbing or scattering it. The Indian Ocean haze, with as much as 10 to 15 per cent black carbon, is known to reduce the surface solar heating by about 10 per cent, while nearly doubling the lower atmospheric heating. The haze has led to a cooling of about 0.3c over the Indian subcontinent since the 1970s, says the indoex findings.

An indirect effect of aerosols on the amount of incoming solar energy is through their influence on cloud formation. They can enhance the possible cooling effect of clouds. Dense clouds containing many small droplets if the air is overcrowded with aerosols, reflect the most sunlight back into space, causing more cooling. More droplets mean more surface area to block the light.

While scattering of light by aerosols can be measured fairly accurately, assessing absorption by soot remains a challenge. Soot is a very complex material built up of a number of nuclei. As its three-dimensional structure is not known properly, it is not easy to calculate the light absorbed by it. Moreover, it is impossible to characterise each and every source of aerosols. Only one instrument, the photo acoustic spectrometer, directly measures absorption by particles suspended in the atmosphere, but it has not been used widely. In practice, therefore, the absorption by all particles together is measured, but this is not a sufficiently sensitive method. Also, the process of collecting particles to measure absorption alters their structure, and it is not known as to how different the measured value may be from the actual absorption.

Moreover, it should be known precisely how black carbon is mixed with other particles in the aerosol. This is important as soot particles embedded in a sulphate aerosol can absorb up to twice as much light because the sulphate acts as a lens.


The presence of haze can affect agricultural production, as it cuts down the total amount of sunlight reaching the Earth, which in turn reduces photosynthesis in plants. Moreover, settling of aerosol particles like black carbon and sulphate on leaves can further decrease the amount of sunlight absorbed by the plant for its growth. Such a deposition can also increase acidity, which is again harmful for plants. Another significant effect could be the suppression of rainfall by the haze.

In one of the first attempts to estimate the impact of the south Asian haze on Indian agriculture, a crop model has been developed by the Indian Agricultural Research Institute, New Delhi. The haze is observed in winter and rice is the dominant winter crop in south India. The model showed a decrease of about 5-10 per cent in rice crop productivity when reduction in sunlight due to the presence of haze was considered (see graph: Cropped!). The yield of sugarcane, an important cash crop in the country, also decreases. For the crop sown in October-November, the decrease could be around 1.5 per cent, as the reduction in sunlight would occur during important stages of the plant growth.