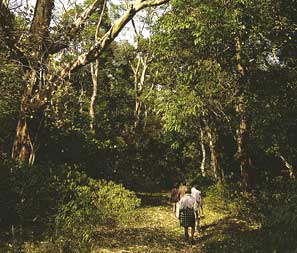 Many of us tend to regard wildlife with a degree of awe. This has much to do with representations by the popular media, images circulated by television channels such as the National Geographic and Discovery, and the curiosity created by a genre of travel writing. Such accounts do help create interest in wildlife, and in conservation, but they also foster an image of the wild that is a little distant from reality.

This false glamour has a genealogy that dates back to accounts of 18th and 19th century European travellers to the colonies. By the late 19th century, accounts of Indian wildlife had a captive market in England. As animals became rare, they also became exotic. Tigers, for example, had become rare by the times of Kenneth Anderson and Jim Corbett. And that explains a lot of these writers' popularity. Anderson writes in Jungles Long Ago, "I have received many letters urging me to continue writing, if for no other reason but to increase the public interest in the jungles and the wildlife that remains in India."

The writings of these naturalists fitted perfectly into their image of exotic India. In the short story, A Night in the Spider Valley, Anderson talks of a night jaunt in the forest "unarmed" with his friend. The author's swagger notwithstanding, it must be remembered that most people who lived in and around the forests at that time did not carry arms--they don't do so even now, nor do any of the conservation biologists who spend years in the forest.

In the same book, Anderson offers an invitation to his readers: "So imagine now that you are seated before the fire. You are in a glade of a great forest; towering trees surround you, clothed in a cloak of blackness broken by thousands of sparklers, the myriad tropical fireflies. Close your eyes and listen to my tales of tigers, of adventure and mystery, as the jungle breezes waft the night scent of the wild flowers on a cool current that fans your brow, and remember that you are in a land where time is of no consequence and the word 'hurry' is never spoken".

Anderson's invitation was--and is-- quite tempting. It had enormous exotic value not only for westerners who by then had lost the majority of their carnivores but quite ironically to many Indians as well.

In modern times, popular television channels such as the National Geographic and Discovery have become purveyors of the exotic. They also often have a fair share of handling wild animals both in controlled and wild environments. As a wildlife photographer I understand the constraints in the field. There are instances when it is impossible to obtain a photograph or footage in the wild. For example, it's very difficult to capture the activities around a termite mound or to obtain footage that shows how a kingfisher plunges to secure its prey. Such footage can only be obtained in a controlled situation. But such footage obscures much.

So does a 30-minute documentary. Most times it requires a full season of shooting/filming. Many a times shooting can take up to five years. This is particularly the case with filming tigers in India. When all the five-year's work is condensed into a 30-minute capsule, the priority seems to be to keep the viewers amazed and interested. The viewer is fed with some facts and figures about the species, there is an explanation or two about their behaviour, and it ends there. Most often, information about the shooting conditions or the strategies of filming is not given.

Viewers having seen the great animal going about its life in front of the camera believe that a visit to the forest would provide them an opportunity to experience what the photographer or the film-maker had gone through. But it doesn't happen that way.

The print media is no exception. Let us look at a recent publication, The Way of the Tiger: Natural History and Conservation of the Endangered Cats (Colin Braxtor Photography Ltd., Scotland, 2001). It's a richly illustrated book, studded with brilliant photographs by all the biggies in wildlife photography. But while the aesthetic quality of these photographs is brilliant, they were mostly shot in controlled situation. The publishers, if they wanted, could have expended some effort to get photographs of wild tigers in the wild.


Interviews with wildlife resort managers and interaction with (wildlife) tourists show that the Discovery and National Geographic channels and the images thrown up by the media have a huge impact in boosting wildlife tourism. Wildlife resorts, both government and private, have mushroomed in recent years. The opening up of the market and the software boom has enabled a section of urban Indians to afford an experience that they had so far seen only on television or read in print.

A lot of wildlife tourists want to relive their 'television experience'. When that doesn't happen, disappointment sets in and in extreme cases, the host is even branded a cheat. A placard placed at the ticket counter at Bandipur National Park, Karnataka, is revealing. It says that the forest department cannot be held responsible if the visitor does not see any animals and there will be no refund of money in such cases.


Many wildlife research projects are manpower-intensive. Volunteers are required for data collection. The Center for Wildlife Studies, Bangalore, has been taking volunteers since 1989 for line transect exercises in all their field stations. The organisation often has to deal with a deluge of applications from people wanting to participate in these exercises. Interactions with many of these first time volunteers reveal that the media and television plays a big role in their interest in wildlife. But a majority also comes with loads of ideas about the forest, the glades, the streams, star studded nights and tropical fireflies. But one week in the jungle observing the rules of nature, and dealing with wild elephants and itchy insect bites is enough to upset such acquired notions. Only the interested turn up next season. The drop out rate is more than 80 per cent.

At one point during the lecture, I showed my audience an image of a chital seen through the bush, and asked them for comments.


Many said the photograph was fuzzy, some said it was out of focus and a few others said I should have avoided the obstructing foliage or cut it off. I asked them to imagine a situation where they are walking among the bushes and happened to the see a chital. Many had second thoughts and approved the 'fuzzy photo'. Some could appreciate the natural conditions that would have obscured a 'clear view', but there were still a lot who did not want anything between the camera and the animal. It makes me wonder if this outlook is because the media bombards the viewers with certain type of images and convinces them that 'this is the perfect photograph'.


E P Gee, in his only book " Wildlife of India", makes his dislike for night photography using camera traps, quite apparent. He says that the animals often stared at the camera, and argues that the flash-light makes the picture too flat. Such situations also limit the choice of composition. The observations of the veteran wildlife photographer, T N A Perumal on tiger photographs are worth mentioning. He noted that common people often pictured a tiger in a "roaring" pose. He then pointed out that such pictures were very often obtained after causing a fair amount of irritation to the animal.

It's only recently that good sense has prevailed and the bbc Wildlife Awards discourage photographs that are obtained by irritating/disturbing animals.

However, the trend of sensationalising wildlife-related visuals continues and exotic images of the wildlife are whipped up.

Gopinath S is a freelance wildlife photographer based in Pondicherry. He has chosen the medium to create awareness about vanishing natural wealth