Will Fuleco score the final goal?

Three-banded armadillo, the real-life counterpart of FIFA World Cup's official mascot, is in danger of extinction

Will Fuleco score the final goal? 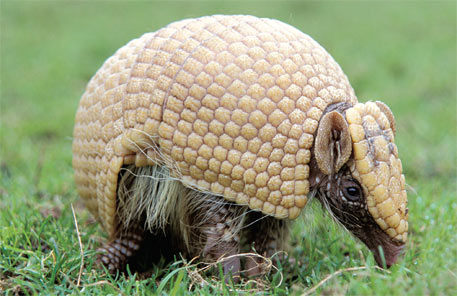 One does not need to be a die-hard football fan to fall in love with Fuleco, the mascot of FIFA World Cup 2014 in Brazil. Amid cacophonous cheers, it jumps into the field, kicks the ball high and breaks into Samba. It then turns itself into a ball, rolls on the ground and, with a jump, returns to its original shape. While the icon is an instant hit, its real-life counterpart, the Brazilian three-banded armadillo, locally called tatu bola, is yet to gain from the FIFA glory. 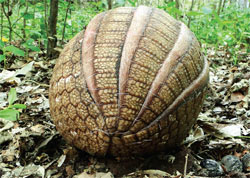 It is an endangered species endemic to the Caatinga, a forest in north-east Brazil. Tatu bola, or Tolypeutes tricinctus, is one of the only two species of 11 Brazilian armadillos which can roll into an impenetrable ball when threatened by predators. When it does so, it tucks its ears into the shell, and the head and tail interlock to seal the shell. This defence mechanism has helped the species survive for 140 million years. But it also exposes the animal to the risk of hunting by remaining still when it rolls into a ball.

The three-banded armadillo produces a single offspring each year, making the recovery of its population very slow. It can grow up to 50 cm in length and can weigh up to 1.5 kg.

The International Union for Conserva-tion of Nature (IUCN) categorised armadillo as vulnerable in 1996. In 2013, it was listed as in danger by Brazil. The species faces threat because of its patchy distribution, rapidly declining number, hunting and habitat loss. It lives in the Caatinga, a topical forest that once covered 84.5 million hectares (ha)—11 per cent of the Brazilian territory. The forest has now reduced to 53 per cent of its original area. Despite its recognition as one of the most biodiversity-rich regions in the tropics, the Caatinga is also among the least protected Brazilian ecosystems. Only one per cent of its original area is under legal protection.

Armadillo’s vulnerable status helped FIFA connect the World Cup with the cause of the environment. The name of its mascot is a combination of Portuguese words for “football” and “ecology”. The chosen name seamlessly represents the way in which the FIFA World Cup can combine the two (football and ecology) to encourage people to behave in an environmental-friendly way, FIFA said. But since the announcement of the name in early 2013, not much has been done to protect Fuleco’s real-life counterpart. This forced a group of Brazilian scientists to challenge FIFA and the government. 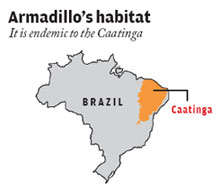 In an article published in conservation journal Biotropica in April this year, scientists wrote: “After the initial frenzy surrounding Fuleco’s selection as mascot, the rich Brazilian biodiversity this species was chosen to represent seems to have been completely forgotten by the FIFA’s official environmental program. Indeed, not a single action for protecting this endangered species or its habitat has been proposed by the organisers of the 2014 Football World Cup.”

Secondly, they asked the Brazilian government to fulfil its promise of creating world cup parks. In 2011, Brazil had announced it would invest US $275 million in 26 federal and 21 state and municipal protected areas that could attract visitors during and after the World Cup. “Two years later, the number of protected areas that would benefit reduced to 16 and less than two per cent of these investments were actually granted. Honouring the initial commitment would benefit Brazil’s protected area system,” said the scientists. And thirdly, they asked the government to accelerate completion of conservation plans for threatened species, including tatu bola.

The scientists admitted that their proposals were ambitious but mechanisms were in place to implement them. “FIFA recently launched the 2014 FIFA World Cup Legacy Trust, which is designed to promote football and use it as a means of community development... FIFA approved a preliminary amount of US $20 million. Although Legacy Trusts typically focus on social issues, FIFA and the Brazilian government could use the trust for environmental conservation,” they said.

On May 22, Brazil announced a conservation plan for tatu bola. It collates data on the species, identifies actions required to address pressures and threats, provides a delivery timeframe and pinpoints those responsible for implementation. “This is a good start,” Enrico Bernard, zoologist at Federal Unive-rsity of Pernam-buco and one of the authors of the Biotropica article, told Down To Earth. “The plan is positive. It summarises 39 actions considered necessary to prevent extinction of the species.” This can also lead to fulfilment of the scientists’ second demand.

“In the next few weeks, we expect the announcement of a park in Caatinga,” says Bernard. “But there is a long way ahead. Some of the pressures and threats over the armadillo are complex. For instance, subsistence hunting of armadillo involves social aspects like poverty,” he adds. 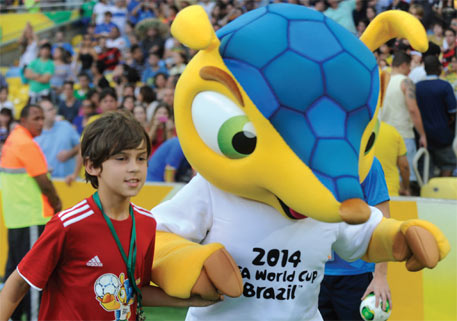 The government, however, has not earmarked enough money to implement the plan. This is where FIFA’s contribution can be crucial. “This will be the most profitable World Cup ever. Estimates suggest FIFA will make US $5.5 billion. We are urging it to set aside part of the 2014 FIFA World Cup Legacy Trust for financing the in-situ protection of the armadillo and the Caatinga,” says Bernard.

It is not clear if FIFA will rise to protect the three-banded armadillo. The football body did not respond to Down To Earth’s email query. “We will get to know the fortune of tatu bola after the World Cup. Call me after a year and I will tell you if the Cup has left any legacy for the armadillo,” says Bernard.