Will planting Causarina give protection against another tsunami?

Will planting Causarina give protection against another tsunami? 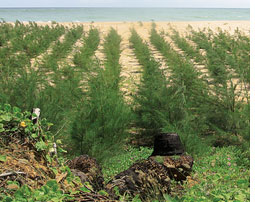 Ever since the 2004 tsunami flattened coastal villages, the Tamil Nadu government has been raising sea walls and protective plantations on a priority basis to blunt the impact of sea waves. It touts the plantations as the first line of defence against tsunamis and cyclones. Ecologists warn it could be a step towards another kind of disaster.

The problem is not planting a shield of trees or 'bioshields', but the way they are being planned and promoted over preserving natural barriers of sand dunes. The protective plantations coming up in coastal areas are mostly monocultures, that too of an introduced species casuarina, a native of Australia. Typically, 90 per cent of the plantations are casuarinas and 10 per cent other species such as acacia, neem and shrub-like trees Calophyllum and Thespesia. Flush with tsunami funds, the forest department has spent Rs 21.4 crore on planting 4,850 hectares (ha) of bioshields and 2,250 ha of mangroves since 2005.

The government must first study the ecological impacts of casuarina, cautions N M Ishwar, a member of the un Team for Recovery Support constituted after the tsunami. It is well known that monocultures are ecologically unstable and introduced species often prove to be disastrous. Casuarina, a spindly tree with needle-like leaves, introduced in Tamil Nadu 100 years ago, is known to be invasive. It grows rapidly and does not allow other plants to grow below it. Casuarina plantations are also affecting Olive Ridley turtles by encroaching upon open sandy beaches, their ideal nesting sites. Ridleys cannot nest in the litter of leaves under casuarina and the tree's superficial roots make it difficult for them to dig into the sand.

Regardless, the state forest department is going ahead with bioshields, mostly in Nagapattinam and Ramnad. Almost one-third of the state's coastline has been covered, says C K Sreedharan, principal chief conservator of forests. "We will now start planting on private lands," adds N Krishnakumar, chief conservator of forests, Chennai circle. The department says since mangroves cannot grow everywhere, in non-mangrove areas it is growing other species. Casuarina is hardy and can grow almost anywhere. It has other uses as well, says Sreedharan. A nitrogen fixer, it enriches the soil and provides wood for fuel and construction. But R J Ranjit Daniels, the director of Care Earth, a Chennai-based organisation involved in biodiversity research, says poor people rely more on the shrub Prosopis juliflora than casuarina for fuel wood. Casuarina, he alleges, is harvested by contractors.

Another point of debate is the location of bioshields. They are not always situated between the villages and the coast. More often they are adjacent to villages. It offers no protection, says Sudarshan Rodriguez, a marine biologist with the un's Post Tsunami Environment Initiative. Instead, it will create a funnel effect, focusing winds and tidal surges on villages. The forest department says fisherfolk require an unobstructed view of the ocean. Also, contrary to the department's claim that trees were planted in a staggered manner, photographs available with Down To Earth show them in well spaced rows. This means during a tidal surge, water would easily flow between the rows, defeating the very purpose of bioshields.

Ishwar believes a site-specific approach is the answer. Collecting data on the characteristics and configuration of coastal rocks and land forms, and the topography of the ocean floor can help in assessing how a tsunami would affect the coast. A gradual, sloping coastal shelf, for example, allows for a greater wave surge, therefore, more damage, says Ravi Bhalla, trustee, Foundation for Ecological Research and Advocacy Learning, Puducherry, who is mapping the the topography of the coast. But the department stands by its strategy. "Ecologists live in an ideal world," says Sreedharan. "We are looking at practical solutions. The coast is so highly deve loped with such socio-economic pressures that we have to plant wherever we find land." The department, alleges Rodriguez, is only interested in meeting deadlines on the number of saplings planted and area covered.

Manmade bioshields, though a better option than sea walls and groynes, are not the last word in protection measures. Sand dunes, a coast's natural ecosystem, have a great protective value and should be conserved, say ecologists. Casuarina monocultures are threatening native herbs and creepers--such as Spinifex littoralis, locally known as Ravana's moustache--which act as sand binders. Sreedharan contends it is wrong to say that native sand dune species will do a better job than casuarina. By themselves they may not, but by preserving the sand dunes they can.