With a bucket and a plastic bag

With a bucket and a plastic bag 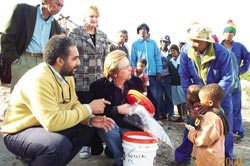 Sasolburg, South Durban, Secunda and Table view -- major industrial cities in South Africa -- are notorious for their pollution levels. Oil refineries, sewage plants, paper mills, landfill sites, chemical storage facilities and smokestack industries dot these cities, making residents' lives miserable. Peoples' woes are also compounded by the fact that South African laws do not require industries to provide data on emissions. So in 2000, residents of South Durban decided to take matters into their own hands. That year, Ground Work -- a non-governmental organisation (ngo) that works on industrial air pollution -- along with the us-based Communities for a Better Environment and the South African Exchange Programme on Environmental Justice introduced the concept of bucket brigade, a community air monitoring system.

The system is based on a simple technique and uses a bucket containing a plastic bag. The bag is used to collect samples containing common solvents, hydrocarbons, chlorinated solvents and many other classes of compounds. At the selected sampling site, a vacuum is created in the bucket and consequently air fills into the plastic bag. A second bucket, containing another plastic bag is also taken to the site and is subjected to the same conditions, but no actual sample is taken.

Both bags are first compared for residues of pollutants. Then the sample is run through a Gas Chromatograph Mass Spectrometer, which compares its "fingerprints" with those of about 100 toxic gases recorded in the computer library. The bag is non-reusable and much of the costs incurred on it are borne by the ngos; government grants also help.

The ngos instruct local residents about the sampling techniques. They are asked to keep daily or weekly pollution logs and also record experiences of those affected by pollution. Samples of air taken at various industrial hot spots of South Africa have revealed the presence of high amounts of volatile organic compounds such as benzene, toluene, trichloroethylene, styrene, xylene and carbon tetrachlorides.
The brigade's technique is not without limitations. For one, it cannot measure soot, dust, heavy metals, dioxins and most importantly nitrogen oxides, known to damage the lungs. Moreover, the technique only provides a 'snap-shot' of what is in the air at a specific time and place, but does not tell what happens when pollution levels rise and fall over long periods. Also, many community-based organisations cannot afford sending samples to laboratories. In spite of these lacunae, the bucket brigade has emerged as a powerful campaign against air pollution by putting out relevant and credible information and mobilising public opinion. Such brigades have also been formed in Cape Town, Sasolburg and Secunda.

The campaign draws inspiration from a movement started by Edward Masry in Contra Costa County, California, usa. In 1995, Masry took ill after inhaling fumes from a factory near his house but was told by the state's pollution control authority that their monitors detected no problem. As a riposte, Masry got an environmental engineer to design a low cost device -- the bucket -- which communities living near toxic emitting plants can use to monitor air.
In March 2004, the bucket was introduced in Semmankuppam and Eachangadu villages, Cuddalore district, Tamil Nadu. The complex of the State Industrial Promotion Council of Tamil Nadu surrounds these villages and pollution from the factories mean that people live in virtual gas chambers. A local ngo, the Federation of Consumer Organisations of Tamil Nadu, trained volunteers to use the bucket and conduct air pollution patrols. They have also been instructed to identify significant air pollution sources in locations such as schools, residential areas, water sources and hospitals. Two sampling buckets were made. But for a stainless steel valve and a bulkhead, they were locally-sourced. The cost of the bucket along with tools and vacuum pump is less than Rs 1,500 -- the device used by the us Environment Protection Agency to perform the same operation costs us $1,000. Monitoring and documentation of air pollution incidents will be conducted for four months. Monthly reports will be published and circulated to regulatory agencies with a request for action to address the problem.