Elsewhere the bubble may have burst, but in rural India infotech is alive and kicking 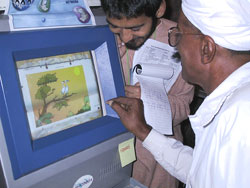 Parbatbhai was ecstatic when an American company sought the manufacturing licence of his latest innovation -- a foot-operated spray pump -- after getting to know of it on the Internet. Unlike traditional spray pumps, his simple machine is lighter, cheaper and, most importantly, does not spill pesticide while spraying.

From a modified motorcycle engine to a cost-effective submersible pump, Parbatbhai had always been at the forefront of making simple and ecofriendly products for villagers. But poor marketing had relegated him to obscurity. That was until his products were displayed on the home page of Honey Bee Electronic Network, which is a knowledge portal for augmenting grassroots innovations through information technology (it).

The project is a collaborative venture between the Indian Institute of Management (iim), Ahmedabad, and the Society for Research and Initiatives for Sustainable Technologies and Institutions (sristi) -- an Ahmedabad-based non-governmental organisation (ngo). It has resulted in two companies seeking a licence to manufacture the spray pump. Today, Parbatbhai is satisfied and rich, "thanks to the display of my product on the kiosk".

Like him, many other grassroots innovators are recognising the power of the Internet even as they battle the odds: power shortage, poor connectivity and inadequate language software. These architects of change were in the spotlight at a recently held workshop in New Delhi on information and communication technology and environment in the Asia-Pacific region.
When conglomerate Indian Tobacco Company's (itc) international business division got into the agro-products business, it implemented the unique idea of setting up an e-chaupal, an interactive website that provides real-time information about the weather and market prices of agricultural products to farmers. The idea clicked immediately, and e-chaupal -- which was launched in June 2000 -- transacted business worth Rs 10 crore in the first year itself. In the current fiscal, this number is set to swell tenfold.

Speaking at the workshop, chief executive officer S Sivakumar revealed that "separate websites in local languages have also been developed to interact with aquaculture farmers in Andhra Pradesh, coffee growers in Karnataka and soyabean farmers in Madhya Pradesh". The company now plans to expand its e-commerce activities to cover basmati rice and wheat growers of western Uttar Pradesh, sesame and groundnut growers of Gujarat and wheat growers of Haryana.

Another similar project, started in two villages of Rajasthan by Jaipur's Ajit Foundation, has brought much-needed relief to the parched topography by providing an integrated view of all the water resources available to the rural community. Aptly named Jal-Chitra, the interactive software uses satellite images and geographical information systems to enable villagers to keep records of the amount of water available from each source, store information on water quality testing, list maintenance work done and required, estimate water demand, generate future monthly water budgets (based on past records) and show the amount of community needs being met through rainwater harvesting systems.

Jal-Chitra is currently being tested in two villages of Rajasthan -- one near Tilonia by Social Work and Research Centre (swrc) and another in Toddgarh by Mazdoor Kisan Shakti Sangathan (mkss). "It allows villagers to create an interactive water map of the village, thus helping them to be better equipped to cope with drought," reveals Vikram Vyas of Ajit Foundation.

The un Environment Programme (unep) has also initiated a critical examination of the linkages between information and communication technologies and environmental protection, with special emphasis on rural development and poverty alleviation. Addressing the workshop, unep executive director Klaus Toepfer pointed out that the debate on information-communication technology had inevitably opened up profound questions about the means and ends of development, the disparities between the haves and the have-nots and the potential of technological innovation to address global environmental problems.

As such, unep is preparing an inventory of best practices from the area for replication in different countries. Several nations in the region are investing heavily in environment, business and rural development (see box: Smart cities are here to stay).

Taking the it initiative to the interiors of Bundelkhand and Patiala is project tara haat, promoted by Delhi-based Development Alternatives. It is designed to attract not only farmers and traders but also housewives, senior citizens and children. It makes extensive use of animated pictures, self-explanatory diagrams and voiceover to overcome the hurdle of illiteracy. Future plans include incorporation of a simple voice command feature.


Honey Bee Network, which started in Gujarat in 2000, is now rapidly spreading to other parts of the country. How did it succeed in the face of connectivity snags? Vijay Pratap Singh Aditya, project executive with sristi, explains: "Initially, we weren't able to get even 24 bps (bits per second) connection in the villages of Kutch or Modasa. Consequently, we were not able to generate much electronic exchange. So we decided to activate the data offline."

The method works in this manner: the information is either updated when the network goes online or, in case of poor connectivity, it is fed through a cd-rom. In both cases, the cost of going online is very low when the network is exploited for commercial purposes. This becomes its unique selling proposition. Much of the data in the kiosk is standalone and the user remains independent of the interaction. Honey Bee has now come up with multilingual kiosks with voiceover for each module that makes it all the more user-friendly.

Similarly, e-chaupal, too, "attempts to leverage it to tackle the challenges posed by fragmented farms, weak infrastructure and the involvement of numerous intermediaries in Indian agriculture", says Sivakumar.


Although networks such as Honey Bee are popular, they largely remain pilot projects. To spread to different locations, Honey Bee is now looking for a revenue model which a local entrepreneur could take up. This could be on the lines of the cable network. Once the revenue model becomes functional, Honey Bee kiosks promise to become a one-stop shop for all the information needs of the villagers with added features such as newspapers, touch-screen manuals, information on health and traditional knowledge and even storybooks for children. The only problem: "The offline system isn't interactive," says Singh. The solution may well lie in integrating different types of software with existing online kiosk systems, he feels.

There was unanimity at the conference on the view that it acts as a force-multiplier. "It helps the poor attain a degree of self-reliance", said M G K Menon, member board of directors, United Nations University, Institute for Advanced Studies.

The beginning was difficult because of the tricky question of acceptability. But advanced technology and innovative software have made it possible for villagers to take advantage of a vast array of business opportunities. And with more development in language software and localisation of operation, information-communication technology could bring about a paradigm change in rural development. it's a deal!