Working to cleanse the Ganga

Several government and voluntary agencies are involved in the onerous task of cleaning up the country's best-known river.

Working to cleanse the Ganga 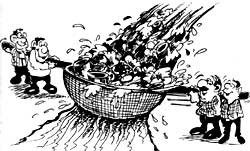 THE GANGA'S alarming pollution level has inspired both government and non-governmental involvement in clean-up work. While the Union government has created an exhaustive structure to cleanse the river, some non-governmental organisations (NGOs) have also been active, though on a smaller scale, in arousing popular consciousness and analysing official clean-up measures.

The Central Ganga Authority, an official apex body involved in the cleansing operation, is headed by the prime minister and meets once a year to make policy decisions, draw up programmes and assess GAP's progress.

There is also a steering committee headed by the secretary to the ministry of environment and forests. In addition to various experts, the committee includes chief secretaries of the three concerned states -- UP, Bihar and West Bengal -- and representatives of concerned ministries. Its main task is to financially manage and execute GAP.

It is the Ganga Project Directorate (GPD), headed by a project director, usually an IAS official of the additional secretary rank, that draws up financial plans and disburses funds to the state-level executing agencies. The sanctioned schemes, which include programmes of popular participation, are then taken over by the executing agencies in the three states. The executing agencies include the municipal bodies of cities where GAP is operational.

As Ganga water cleaning was conceived as a major people's movement, district level task forces were set up with official and non-official members. Task forces headed by either the divisional commissioner or the district magistrates act as watch-dogs in addition to suggesting the most effective cleansing and maintenance measures. The GPD emphasises NGO involvement in popularising the programme and encourages them to make alternate suggestions.

The Indian National Trust for Art and Cultural Heritage (INTACH), having branches in the major cities on the Ganga banks, is associated with the cultural restoration of the river and extends assistance, including financial support, to those active in this area. The Ganga Mahasamiti has been active for 10 years and has frequently taken up the authorities on specific cases of pollution in the Kanpur stretch of the river. About three years ago, it also undertook a small dredging operation with popular participation to divert Ganga water to the Kanpur ghats. The Central Citizens' Forum, is another group actively involved in issues like urban sanitation, as it affects river pollution.

In Varanasi, the Sankat Mochan Foundation has done pioneering work in creating mass awareness. It has among its members a large number of scientists and technical experts from various departments of the Banaras Hindu University. Recently, the Foundation also set up its own Swachcha Ganga Laboratory to regularly monitor the river water quality in Varanasi. The Calcutta-based All India Institute of Public Health and Hygiene has been commissioned by the GPD to monitor the diseases, particularly water-borne and water-washed ones, among people who live along the Ganga. For this, the institute is focusing on the illness levels of two population groups -- those who physically live on the river banks and a control group of those who intensely interact with Ganga water.