The US used partnerships to counter multilateralism 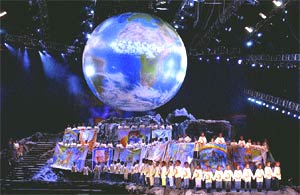 Unwilling to commit to a concrete sum of money over a concrete period of time to fund sustainable development in the South, the us came up with the idea of partnerships (also called "Type ii agreements" in wssd jargon) during the preparatory process of the wssd. Several aspects of these partnerships are designed to suit current us foreign policy. They are voluntary; involve no firm multilateral commitments for funds or deadlines on part of the us government; bring corporations firmly into the picture giving them a free hand to promote their interests through such partnerships; and best of all, ensure that responsibilities remain fuzzy. There are no rules to govern partnerships -- only a set of flimsy guidelines that were not even discussed in Johannesburg.

There were several protests against partnerships from civil society groups when the idea was first proposed. These groups rightly pointed out that governments were trying to abdicate their responsibility by talking about bilateral deals in a multilateral forum like the wssd. They were also uncomfortable with the importance given to corporations in these partnerships. "The Bush administration's hijacking of the summit through partnerships is to promote big businesses," said Deborah James from Global Exchange, a San Francisco-based non-governmental organisation (ngo). "Big businesses cannot be trusted to keep their books, they certainly cannot be trusted to keep the Earth." Despite these protests, Type ii agreements became part of the wssd package with minimum fuss and discussion. In many ways, these partnerships were the only hope for funds in a conference where it was otherwise clear that no further financial commitments would be forthcoming from the industrialised world. This won over several allies for the partnerships -- particularly the cash-strapped un organisations.

The un designated a special room for announcements of partnerships at the Summit venue, and provided hourly updates. Nitin Desai, under-secretary general, department of Economic and Social Affairs (ecosoc), praised the agreements as the major outcome of the summit, moving from "words to action". According to the United Nations Development Programme (undp) administrator Mark Malloch Brown, "The Johannesburg Summit may disappoint now but surprise with its follow up. There is a synergy between governments, the private sector and civil society. It has been the world's biggest trade fair and it will bear fruit." George Kell, executive director of the global compact in the un secretary general's office, said the partnerships have "energised the un system".

The Indian delegation had loudly opposed such partnerships before the summit, saying they would find them acceptable only if four conditions were met. They wanted the goals of the partnerships to have clear linkages with the final Plan of Implementation to ensure that they did, in fact, work for the goal of sustainable development and not against it for the partnerships to be country-driven, not donor-driven for each partnership to be no less than us $5 million, and an assurance that the partnerships would involve 'new and additional' funds, and not merely be a repackaging of existing aid.

Other governments had similar misgivings. Norwegian minister of international development, Hilde Johnson, had warned participants against "Type ii partnership initiatives financed from existing oda flows, with no additionality, putting 'green paint' on old projects, or launching new ones primarily directed towards show-offs and flags for donor governments, undermining national ownership and coordination in poor countries". At the fourth preparatory meeting of wssd in Bali, she pointed out that very few partnerships had been registered by developing countries, yet national ownership was necessary for their success. None of these misgivings were even discussed at wssd. While it suited some to have them slip in quietly into the wssd outcomes with minimum rules, groups against them hoped that if they ignored them enough, they would be sidelined in the wssd process and only form an insignificant outcome.

The only mention of partnerships in the Plan of Implementation calls on governments to encourage partnership initiatives to support the outcome of the wssd. Reference to the need to establish modalities for the follow-up to the partnerships has been removed (the us wanted the Commission on Sustainable Development (csd) to be appointed the monitoring agency for partnerships, and to develop these modalities). Instead, the Plan cryptically calls on "further development of partnerships and partnership follow-up" to "take note of the preparatory work for the Summit".

At the final count, more than 220 partnerships, representing us $235 million in resources were identified during the summit. These range from a deal between J Walter Thompson, a Canadian advertising agency, the Canadian government and unesco to "help communicate sustainability around the world"; to a partnership between the us-based World Resources Institute (wri), the Andean Development Corporation and the un Conference on Trade and Development (unctad) to help small and medium biodiversity-based businesses from the Andean and Amazonian regions to access credit and venture capital. The us and Japan made no bones of the fact that they were simply taking out money from existing aid projects and re-packaging them as new partnerships -- putting green paint on old projects, as Johnson warned. In a press conference, both announced a partnership on health, where they would redirect funds from the Global Fund for hiv, tb and Malaria to other bilateral disease control programmes in the Asia-Pacific region.