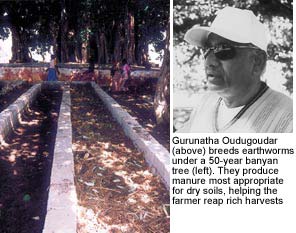 Gadag's black soil makes moisture retention extremely difficult and the district has an almost 100-year history of droughts. Vermicompost -- organic fertiliser produced by earthworms -- is the best nutrient for such soils because it loosens the earth and provides air passage. The compost also prevents water logging and improves the soil's water holding capacity.

According to Oudugoudar, Sanjeevani retains moisture for about six months. This farmer has adopted highly cost-effective method of converting biomass into compost by layered feeders. He has 24 brick pits under a 50-year banyan tree in his farm, where the worms are bred -- a very efficient method according to experts for earthworms reproduce faster in total darkness, as compared to normal daylight. In this pit, the worms are fed organic waste -- a mixture of cowdung, leaves, roots, cow urine and red earth. One earthworm consumes about 4 kilogramme of organic waste daily. Oudugoudar uses the African Night Crawler worms in his farms; their composting qualities are quite high compared to other earthworms. After meeting his farm requirements, Oudugoudar sells the surplus to farmers in different parts of Karnataka. That fetches him Rs 35,000 per tonne and last year he sold 75 tonnes of vermicompost.

The khpkvk has played a significant role in improving the fortunes of farmers like Oudugoudar. The institution was established in 1985 and today it has spread out to 60 villages in the district. Through Krishi Vigyan Mandals, it has introduced agri-silvi-horti pastoral system to Gadag's agriculturists. The agri-cycle in the district now includes green manure and fodder crops such as glyricidia and sesbenia. These draw up water much more easily from the soil than the crops grown traditionally in Gadag, jawar and wheat -- their small roots make water absorption very difficult. Guided by khpkvk, around 450 farmers have taken up vermicomposting and about 200 of them are women. In fact the biggest achievement of the khpkvk has been in helping women organic farmers in the district form self help groups. These help thousands of women in Gadag to market their produce in Saturday markets. Weekly transactions in these markets range between Rs 30,000 and Rs 40,000.

Efforts such as the khpkvk's are very rare. In fact besides the agriculturists in Gadag, there are about 66 vermicomposters across Karnataka. But they suffer from lack of expert guidance. Karnataka has the maximum area under drought in the country and earthworm culture can be a way out.

Night crawler worms were originally distributed in equatorial Africa and now organic farmers in usa and Europe use them extensively. India lags far behind in their use -- and indeed in organic farming -- despite its comparative advantage in generating huge amounts of organic waste. Most of this can be recycled and used to produce fertilisers, fuel and fodder. And earthworm activities can play a crucial role in this.