A miraculous mushroom, over-exploited, is on the brink of extinction 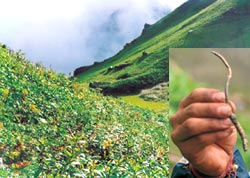 Between May and June 2001, about 2,500 people thronged the alpine meadows of district Pithoragarh in Uttaranchal. About 100 tents sprung up, often occupied by entire families. Then in July, local newspapers splashed the stories of two murders that had occurred in and around the Chipla Kot region.

What were so many people doing at 4000-meter-plus altitude, braving an adverse climate? What sinister reason could there be for murder in alpine pastures revered by locals as the abode of the almighty Chipla Kedar?

Answer: Collecting bagfuls of Yar Tsa Gumba, in 2 cases murdering for it. Yar Tsa Gumba is the Tibetan name for Cordyceps sinensis, a famous and costly Chinese traditional medicine. It fetches Rs 60,000 to Rs 80,000 per kilogram in Pithoragarh, passes through Nepal and finally reaches markets in China to be sold at Rs 1,00,000 per kg. (In 2001, it is believed 4-5 quintals of Yar Tsa Gumba found its way into Nepal from the border township of Dharchula alone. Taklakot in Tibet happens to be its largest market.)

A type of entomophilic fungus grows parasitically upon the larvae of the Chongcao bat moth and forms a fungus/larva composite body. The larva forms a cocoon in the winter and hibernates in the ground. Because the fruiting body of the fungus emerges from the head of the larva in summer and resembles a grass sprout, this medicine's Chinese name means roughly "winter insect, summer grass."

Hence it is also known as caterpillar mushroom. The biological relationship between the fungus and the caterpillar is yet to be established. At a certain point in its life cycle the mycelium finds the buried caterpillar -- the larva of the bat moth -- and colonises it. The mycelium's growth mummifies the caterpillar, then forms into a mushroom sprouting off of the back of the caterpillar's head! The mushroom pokes through the soil, looking much like blades of grass, but iridescent blue in color. The local people find the caterpillar by watching the wild yaks. Where the yaks graze, there the mushroom will be found.

Cordyceps sinensis is found in alpine and sub-alpine zones between 3,600-4,200 metres above mean sea level (m amsl). It is found in the Nepal Himalaya, in Tibet, in Sikkim, in Bhutan, and in the Sichuan, Qinghai, Xizang and Yunnan provinces of China. In India, it is found mainly in the higher altitudes of Arunachal Pradesh and has recently been discovered in the alpine meadows of the Chipla Kedar, Darma, Vyas and Johar valleys and Ralamdhura in the Kumaun Himalaya, where it is referred to as Keeraghaas. Presently, it is known to be found in various places like Chipla Kot, Brahm Kot, Ultapara, Ghwardharp, Najari, and Nangnidhura in the Dharchula-Munsiyari region of district Pithoragarh, and in the alpine meadows of the Niti-Mana valleys in Chamoli district. An efficient collector can pick around 50-60 samples daily; about 20-30 thousand mummified insects weigh about 1 kg, depending upon the larval instars infected.
Cordyceps' power was discovered 1,500 years ago in the Tibetan mountain pastures. Chinese herdsmen observed their cattle and livestock became very energetic after eating a grass-like mushroom -- even older animals became vigorous. About 1,000 years ago, physicians of Ming Dynasty emperors used it to develop powerful potions.

Cordyceps is believed to be an aphrodisiac, a cure for infertility. The New York Journal of Medicine reported that the species has properties similar to Ginseng. It is believed that 5 grams of Cordyceps is equivalent to 50 grams of Panax Ginseng! Yar Tsa Gumba has traditionally been used in China to also cure backache and anemia. It is specifically used for excess tiredness, chronic cough, asthma, to build the bone marrow and reduce excess phlegm. Clinical studies in China indicate the fungus can improve liver functions, reduce cholesterol, adjust protein metabolism, improve immune functions, inhibit lung carcinoma and have a therapeutic value in treating aging disorders.

Chemical analysis reveals Cordyceps sinensis is a Pandora's box of nutrients (see box: Mega nutritious). It is also effective against tuberculosis. It has shown outstanding activity against human leukemia in many trials in China, Japan and elsewhere.


This year it is worse. In Chipla Kedar, the number of tents has increased to 200. Last year, only the locals were there. This year, they are competing with Nepali labourers, nomadic shepherds from Himachal Pradesh and Tibetan traders! This year, the pressure was such that locals did not wait for July (usually the harvest month). They moved in into the meadows, family and all, in April itself. The harvesting season ended prematurely, in late June itself. This has grave repercussions for the species, as the fruiting body (the stalk) needs time for maturity and spore dispersal.

In the first week of July -- as I knew it, the peak harvesting month -- I along with students went to carry out a survey of the species. We chose Nangnidhura as our first site. We reached the base of the Panchachuli peaks (6,700 m above mean sea level) on the third day, and a day away from Nangnidhura. Here, returning locals told us the meadows were cleaned out, that after a week they could salvage only around 30-40 specimens! We then decided to visit another site, where, according to villagers, we had a fair chance of retrieving Yar Tsa Gumba: the Ralam Bugyal.

We set out. We made a stop at village Paato, around 20 kms from the main township of Munsiyari. Next day we reached the last village, Ralam, around 8 pm. The next day was spent in fruitless endeavour. We simply couldn't believe it, not a single specimen!

But we did gather information. On an average, 80 per cent of the population of village Paato and Ralam was involved in extracting Yar Tsa Gumba during the season. Awareness about the monetary value of the produce had risen; villagers were now able to procure as much as Rs 40,000 per kg, whereas earlier they used to earn about Rs 15,000 to Rs 20,000. But this also showed how scarce the mushroom had become. Locals have, in most cases, now demarcated territory where no outsider is allowed to venture into. The villagers of Paato and Ralam zealously enforced this mechanism.

There has been a sharp decline in the harvest. This has occurred over the last two years. An estimated 30 kg of Yar Tsa Gumba was procured by the villagers of Paato and Ralam last year; a mere 15 kg this year! Last time villagers had no option but to sell their produce to a single middleman (often belonging to their own village or to a adjoining village), but this year the number rose to 3-4. The middlemen came from as far as Dharchula, often to the meadows itself! The competition greatly benefited villagers.


One option is to ban the exploitation of Yar Tsa Gumba. But it not a cure -- when it comes to the conservation of species in the wild. On January 18, 2002 the government of Uttaranchal issued a guidance to the district magistrate, Pithoragarh, that Yar Tsa Gumba be harvested through van panchayats with supreme powers vested on the sarpanch and that a committee of van panchayats be formed to monitor the exploitation. All this work was to be carried out under the supervision of the Conservator, Pithoragarh. 5 per cent of the total collection, in monetary terms, was to be deposited with the samiti's exchequer. All these steps, however, proved futile.

Interestingly, all villagers knew that the exploitation was an illegal activity and hence wanted to hide his/her identity. While everyone was involved in minting money, they were equally concerned that this resource, at the present rate of exploitation, is soon going to vanish within the next few years.

Poverty drives people to over-exploit the Yar Tsa Gumba. Encouraging villagers to cultivate other medicinal plants, and spreading the traditional knowledge involved in such cultivation to those villages lacking such enterprise will not only bring about a change in the economic conditions of these people but will also lessen the pressure on Yar Tsa Gumba. However, its survival rests with the state government, that has to set forth the mechanisms, and not with the villagers. As of now, the species calls for sound decisions in its favour. Urgently.