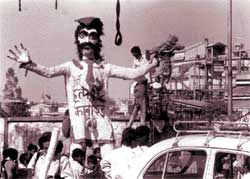 twelve years after the devastating Bhopal gas tragedy, the 600,000 people affected by it are the hapless victims of another human crime: callousness. Callousness perpetrated by their very own Indian government. Callousness which manifests itself in its tardy method of carrying out medical tests for awarding compensation. In the time taken to award the compensation. In making appropriate medical facilities available to the gas-affected. In preventing release of information of epidemiological studies carried out on the affected population.

In February 1989, the Government of India had let Union Carbide Corporation (ucc) off the hook by accepting a measly compensation of us $470 million instead of the us $3 billion which it had demanded.Besides its other displays of apathy, the government also chose to ignore recommendations of the International Medical Commission on Bhopal (imcb) that what was needed was not hospital-based treatment, but out-patient care. Instead, it has pressed on with a 500-bed hospital being constructed on a Supreme Court (sc) directive.

The official response to criticism is the usual. "The people have been and are being paid compensation. There are sufficient medical facilities close to their homes," states a casual Tanwant Singh Keer, the Madhya Pradesh minister for gas relief. "A hi-tech hospital, whose facilities would match the best in the country, would be a boon for entire central India, and not just the gas-affected," he adds. The gas-affected disagree. For them, this hospital, 10 km from the ucc factory, is too far away for the daily-wage earners, who constitute a majority of the severely affected people.


While most compensation claimants received a one-time compensation, epidemiological studies carried out by the Indian Council of Medical Research (icmr) in 1987-91 reveal that morbidity rates of the gas-affected was on the rise. Among the affected, deaths due to respiratory causes was 42.46 per cent as compared to the national average of 20 per cent. Abortion rates were higher among women in the gas-affected areas. Almost 50 per cent infant deaths were due to respiratory complications. Instances of chromosomal aberrations were also evident.

"The personal injury evaluation (pie) carried out by the directorate of claims for medical categorisation of the gas-affected five years after the leak, has been questionable and unscientific," says Sainath Sarangi of the Bhopal Group for Information and Action (bgia). He sites independent medical studies carried out by New Delhi's Jawaharlal Nehru University (jnu), which indicated that around 60 per cent of the claimants required the pulmonary function test (pet) and exercise tolerance test (ett) to have proper medical evidence of damage caused to the gas-affected. But only 15 per cent and two per cent actually underwent the pet and ett, respectively. According to categorisation figures presented by the directorate of claims, only eight per cent of the 597,306 claimants who had been medically examined, suffered serious injury as a result of the gas leak. Forty-three per cent were reported to have suffered no injuries and only a ridiculous 40 persons were found to have suffered total disability! The icmr studies, however, indicate that almost 80,000 people suffered eye injuries, which were permanent in nature.

The process of pie depended on an arbitrary scoring which converted symptoms and signs, treatment and investigation findings into numbers. There was no attempt to find out and diagnose the disease from which the claimant suffered, rendering previous medical records, from immediately after the gas leak, useless.

According to guidelines specified by the directorate of claims, a claimant would be categorised 'permanently injured', only if the score was more than that in the immediate post-exposure period. This implied that unless the claimant's health was worse at the time of assessment (conducted five years after the gas leak), they would be labelled 'temporarily injured'. "The pie was based on very few investigations. As ucc had suppressed all toxicological data in a bid to underplay the damage caused by the toxic gases, we just do not have adequate information to assess the damage to the human body," notes the jnu study carried out by Nishith Vohra and Satyamala. Their observation only lends credence to the assumption that detailed tests needed to be done for most claimants.

Dozen years after the leak, medical care for survivors remains the same. In absence of information on the nature of gases that escaped that merciless December night, doctors continue to indiscriminately prescribe antibiotics, steroids and psychotropic drugs which provide temporary relief. "The resistance of the gas-affected reduces with time. The damage caused was permanent and that cannot improve. Drugs can only provide immediate relief," says K K Thassu, chief medical officer, gas relief. He, however, adds that there was no irrational dispensation of drugs.

Says D S Jain, registrar, office of the welfare commissioner, "The medical categorisation depended on the documentation provided by different medical practitioners, who examined the gas-affected. Thus, the categorisation varied from doctor to doctor." Sarangi says that the sc unfortunately left out directions towards complete registration of claimants, proper assessment of injuries and determination of adequate compensation.


A comparison of compensations provides interesting insights. The sum of us $470 million was considered adequate for Bhopal's 5,97,306 claimants, which entitled every claimant to us $786.87. In a 1985 case in the us, where there were 60,000 claimants against the Johns Manville asbestos company's polluting ways, the compensation amount was us $2.5 billion, with each claimant receiving us $41,666.67. And this case did not involve a disaster, but was a one of harmful effects emanating from a source of non-obvious danger. The bgia points out that next of kin of those killed in the Kanishka mid-air explosion (1985) were paid Rs 1,000,000 (1 million) each; the lives of the affected in the gas leak have been priced at least 10 times lesser than their fellow citizens.

In Bhopal, the average payment for the 14,775 death claim cases which were disposed, was between Rs 27,865-just over Rs 1 lakh. From this was deducted the interim relief paid to claimants. The government offered no interest on the compensation payment, while reportedly amassing Rs 44 lakh a day as interest itself. Established norms in tort cases say that claimants are entitled to interest on compensation from the date of registration of claim till that of its resolution. "If the government had paid interest on the compensation, the amounts paid would have been realistic, keeping in mind the suffering the gas effected people underwent, the loss of earning capacity, and the medical expenses they had incurred," says Abdul Jabbar, convenor of the Bhopal Gas Peedith Mahila Sangharsh Sangathan, an organisation fighting for the cause of those affected.

The government's denial of compensation to those who were below 18 years of age at the time of the disaster has drawn much flak; there were 1,50,000 such claimants at the time of the leak. The logic offered by the government was that as they were minors and hence did not own property, they could not claim compensation. Equally criminal was the lack of foresight in keeping in mind those infants who were born to gas-affected women. "The effects of the gas can last for upto three generations," states M P Dwivedi, former director of the Bhopal Gas Disaster Research Centre. icmr studies have reported that physical and mental growths of such children have been significantly affected. The style of functioning of the welfare commissioner's office also invites criticism. Says Ranjit Kumar, member of committee oppointed by the sc in 1995 to look into the issue of compensation procedures, "We noted that the welfare commissioner's office took suo moto action in all cases regardless whether a case merited revision or not."

Indifference and injustice: these terms describe the official handling of the aftermath best. Even the practice of conducting lok adalats, begun in 1995 to cope with the problems of delays in compensation, has had its share of controversies. The welfare commissioner was forced to revise all cases awarded on one occasion, after it came to light that the presiding judicial officer had alloted only two minutes per hearing. Today, most of Bhopal's survivors share the resigned attitude of Hamida Bi, who is one of them: " Humey to Allah Mian ne bachaya. Woh sabse badi baat hay (God saved us that day. That is what is most important)."
Bhopal Gas Disaster Compensation Compensation Cover Story Cover Story India Industry Industry Pollution Food Process Industry Food Process Industry Food Process Industry Waste Disposal Waste Disposal Pollution Control Crosscurrents Crosscurrents
SUPPORT US