It may not be the best, but has a big appeal. For those wanting to break the tradition in the small car segment, this Hyundai product offers a good option 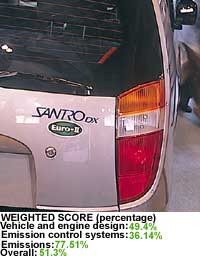 The debut vehicle of Hyundai Motors is immensely popular with the customers despite being a relatively late entry here in 1998. Santro's success is pegged on the comparatively low fuel cost and a high reliance on pollution control equipments, making it the third best in the small car segment. The product sports only some modern engine design aspects and in that sense it is slightly more conventional that its coveted counterpart Matiz. It is, however, fitted with all necessary emission control systems except exhaust gas recirculation (egr). The car's emissions are overall 76.25 per cent better than what the existing Euro ii standards prescribe.

Even though its material composition does not reflect the use of advanced technology and contributes to greater environmental load unlike Matiz and Maruti 800 Euro ii, Santro still is the most fuel-efficient product with an average of 17 kms per litre. Its high unladen weight at 835 kg also greatly needs reduction even though it has recorded an above average performance in geometric design. It has the smallest and the most compact cylinders of 250 cc each but an average compression ratio and is average in mechanical efficiency.

Though Santro has all required sensors, it misses out on the knock sensors -- a must for both better fuel efficiency and better driveability. It still places a high reliance on pollution control equipments since its three-way catalytic converter is fitted with conventional oxygen sensor. In other words, its engine is incapable of reducing emissions in case the pollution control equipments fail. But Santro scores high because its actual emissions have a lesser amount of pollutants like co, hc and nox, compared to the other two cars. Though the vehicle produces substantially higher level of noise, low fuel cost remains the buzz word.