`Family farming is not a romantic idea. It is business'

The food price rise of 2007-08 highlighted that investments in the agriculture sector have reduced in the past three decades. One of the most effective ways to increase production and fight rural poverty is by repositioning family farming at the centre of agriculture. This is the reason the UN has declared 2014 as the year of family farming. Kanayo F Nwanze, president of the International Fund for Agriculture Development tells Jitendra how family farming can help achieve food security. Edited excerpts 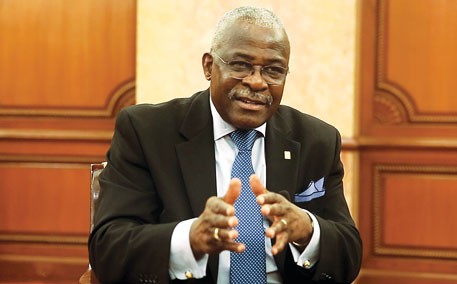 Family farming used to be a rural tradition and source of livelihood for small farmers. But it lost its relevance. Now IFAD is trying to revive it in developing countries. Why?

I can’t say that family farming has lost its relevance. What actually happened in the last 30 years is that there was a large disinvestment in the agriculture sector in developing countries. The overseas development assistance to agriculture went down from 25-30 per cent to nearly three per cent until the food crises of 2007.

We suddenly realised that we have neglected the agriculture system. Many people left agriculture and went into sectors where massive investment was being done, like infrastructure development and industrialisation. After the beginning of the food price rise in 2007-08, it was recognised that family farms, which in developing countries are usually of two hectares or less, are the primary producers of food consumed in the developing world. Investments in the agriculture sector can move more people out of poverty than any other sector.

Is family farming a great idea to fight food inflation?

In many ways it is. We should stop romanticising family farming. It is not a romantic idea, but a reality. It is business. When we import food because we are not able to grow and meet local demands, we create jobs in another country. It is better to invest in your own agriculture system and make it more productive and efficient. It is not just a substitution to create jobs, it also generates wealth.

How big is family farming as a sector? Are there any estimates?

Globally, there are nearly 500 million small farmers. Most of them are in the developing world. Almost 90 per cent of their farms are less than or equal to two hectares. On an average, 80 per cent of food consumed in a developing country is produced by its small farmers. In some countries this share is 30 per cent and in others it is 90 per cent. If you check the value of the production and how it contributes to the country’s GDP, it varies from country to country. In some it is five per cent, in African countries it is 30 per cent. So the important thing to know is that urban areas in developing countries get their food from rural areas. If small farmers are not successful then the urban population will feel the heat.

How do you see India's effort to counter malnutrition? India brought landmark legislation to provide food to 67 per cent of its population at a cheap rate. Do you agree with this `target' approach?

One of the important ways to counter malnutrition is to grow and eat diversified crops. It is cheaper to eat nutritious food than take nutritional supplement later. IFAD is trying to promote nutrition-sensitive agriculture by encouraging people to opt for crop diversification and house gardening. We are providing funds to programmes conceptualised by the government. The National Food Security Act is an ambitious programme. When you face multiple demands on your resources from many sectors then you have to have a targeted approach. Target the most vulnerable population if you want to see an impact.

How can we institutionalise family farming?

The foremost thing is that small farmers need to get organised—by forming associations, farmer groups, women’s group, and cooperatives—to access financial services. To institutionalise family farming, we policymakers first need to change our mindsets and accept that farming of any size, of any scale is a business. It is an economic activity which generates the food for the world and creates jobs. Small farmers are small entrepreneurs who run a business. We at IFAD ask ourselves that if farming is a business then why is it not successful, why are farmers not making profit? We treat them as if they are waiting for endowments and charity. Farming is a dignified profession. When governments start recognising that farmers are in the agro-business, then it will become an institution.

Can the public distribution system boost family farming by making it mandatory that food and vegetable served in government schools and programmes be procured from local sources?

I would not like to use the word mandatory, but make farming attractive so that people start taking up food production as a business. If a community or a group of farmers is able to manage its business properly, it would be able to negotiate and supply food to schools, colleges and hospitals. When you make something mandatory, people tend to resist it. You have to make a broader definition of food production. It has to include production of food, storage facilities, transformation through value addition, market information, packaging and consumption. All along the value chain there should be a business opportunity to make it attractive to the youth. Now, they are only seeing its hard part, which is dirty and unattractive. Sustainable agriculture ensures that people make money. It empowers them economically, especially women in rural areas. Agriculture then becomes more feminised.

How do you see the poverty line debate?

For many years, the World Bank has been using $1.25 as the base line of poverty. In some countries it is $2 per day. IFAD believes moving from $1 per day to $2 per day is not poverty eradication but poverty management. Because people will still remain poor. To move people out of poverty we should facilitate them to reach $5 and then $10. Then it would mean poverty reduction and eradication.

The home gardens of Wayanad