'Smallholder farmers are on the front lines of climate change'

After winning the Africa Food Prize 2016 for his advocacy to place smallholder farmers at centre of agricultural agenda, Kanayo F Nwanze explains how betterment of the community is necessary for world's food security 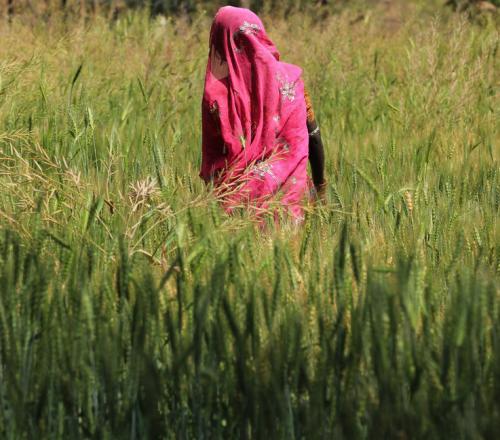 A large part of the world’s food is produced by smallholder farmers, but they have remained economically disadvantaged. What are the reasons for this?

It is a tragic irony that smallholders grow much of the developing world’s food but often go hungry themselves. They have long been left out of the mainstream of economic growth, development, and government policies because until the 2006 food crisis in the Horn of Africa, governments did not give priority to agriculture as the engine of economic growth. Smallholders need access to water and land, rural finance, markets and credit and information about prices. They also need an enabling policy environment, a supportive infrastructure and incentives to make business competitive.

While it is critical to end marginalisation, it is also important to realise that smallholders are not waiting for handouts. . There is no great secret about what it takes or what has held smallholders back so far. With what we know today about agricultural transformation, and the power of agriculture to drive reduction in poverty and hunger, there is simply no excuse for inaction.

What methods/policies do you suggest are best for uplifting smallholder farmers in Africa?

The key interventions needed are to improve smallholders´ access to improved seeds and other inputs, ownership of the land they farm, build their capacity to link with markets—including by strengthening infrastructure—provide them with the means and incentives to manage their land sustainably in the face of climate change, and create an enabling policy environment for all of these changes.

We know what it will take to lift up Africa´s smallholder farmers. Now it is time to put this knowledge into action—in fact it is past time. Some countries have taken steps to invest in and support the smallholder sector but the potential across the continent remains largely untapped.

How many people in Africa and worldwide have benefitted from these methods? How many can be predicted to benefit if these policies are implemented worldwide?

The number of beneficiaries from improvements in agriculture in Africa is in the millions, and billions worldwide. Because we have to count not only smallholders and their communities, but also the urban populations that depend on them for their food. Globally, the number of chronically undernourished people has declined to just under 800 million. We were able to do this in less than 15 years. With the new momentum of Agenda 2030 and the Sustainable Development Goals, we have a never-before global commitment to better the livelihoods of poor rural people.

How important is the role of cooperatives in improving the economic status and scientific knowledge of smallholder farmers?

Producer organisations play an absolutely vital role in enabling rural people to seize new economic opportunities. These organisations fulfil several functions. They allow numerous small producers to aggregate their product so that they can supply modern value chains, and give them power to advocate for themselves in dealing with other players in the food system. This is why IFAD stresses the “4Ps” of public-private-producer partnerships. Producer organisations also build the capacity of rural people to advocate for themselves and for policies that are conducive to creating an enabling environment for them to grow their businesses. They can be a conduit for access to knowledge through training, cultivationof leadership, and access to finance and inputs. Especially for women and young people, organisations can open doors to opportunity that have traditionally been closed to them.

While many in the civil society as well as the administration accept that smallholder farming is the route for growth in Africa, many governments have not reached their investment targets in the sector. How can this be accelerated?

There is no doubt that Africa has made some progress at the policy level, and we can point to the Maputo Declaration of 2003, the Malabo Declaration of 2014, and the CAADP compacts of more than 20 countries to accelerate agricultural development. But what is on paper and what is happening on the ground do not always match. Progress has been made, but it is dwarfed by the potential of what could be. Therefore we need to accelerate inclusive rural transformation, working at a number of levels, from the top down and bottom up. At IFAD, we advocate for a stronger commitment to agriculture with government leadership through individual and collective dialogue. We work with our Member States to design projects that target opportunities for smallholders and other rural people.

In an open letter to African leaders in 2014, I asked them to deliver on their promise to invest more in smallholder farming. By empowering rural people and supporting local organisations, we help demonstrate concretely the enormous returns that countries stand to gain, both in terms of prosperity and food security, by boosting their investment in agriculture.

Climate change continues to threaten agriculture, with small famers being more vulnerable to it. What can be done in the future to climate-proof crop production at small scale?

The Paris Agreement on Climate Change was a watershed moment in the fight against this threat. Going forward, we must demonstrate more convincingly the positive role that smallholder farmers can play in confronting climate change impacts.

IFAD is mainstreaming climate issues throughout its portfolio. And our Adaptation for Smallholder Agriculture Programme, or ASAP, is channeling climate finance to smallholders, so that they can access the information and technologies they need to build resilience. Launched in 2012 and working in more than 30 developing countries, ASAP has become the largest global financing source dedicated to supporting climate change adaptation for smallholder farmers.

Many projects supported by IFAD focus on delivering timely climate information. They also build the capacity of farmer associations, women’s groups, and extension services to adopt and promote climate-smart technologies, such as biogas and drought- and flood-resistant crop varieties. Smallholder farmers are on the front lines of climate change but often lack the resources and resilience to cope, so building their capacity is absolutely important.