Authors of the study, Evan Weller and Seung-Ki Min, tell Down To Earth how the Indo-Pacific warm pool has warmed about 0.3 degree on average and expanded by 32 per cent during the past 60 years 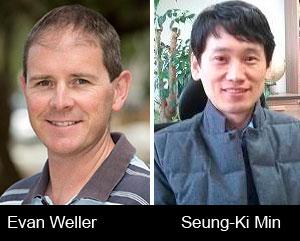 How does your study add to the existing evidence showing a link between anthropogenic climate change and weather patterns?

Our study provides a new quantitative analysis and finds solid evidence for human influence on the long-term growth of the Indo-Pacific warm pool (IPWP). There have been several studies linking anthropogenic greenhouse gas increase to the observed upper ocean warming over the globe and ocean basins, including the Indian Ocean. However, attribution of IPWP's changing character has not been studied. IPWP is an important area driving atmospheric circulation through deep convection and, hence, determining weather patterns regionally and globally. So identifying causes of the observed IPWP changes is critical to understanding how greenhouse warming will affect weather patterns.

The recent droughts in South and Southeast Asia have been largely attributed to a particularly aggressive El Niño phenomenon. Why and how have you concluded that there is more of a human hand than natural causes in such changing precipitation patterns?

Human influence due to greenhouse gas increase is manifested when looking at the long-term slowing varying change, in our case, warmer and bigger IPWP during the past 60 years. However, year-to-year or decade-to-decade fluctuations of the IPWP and associated precipitation patterns can be more affected by natural climate variability like El Niño, Indian Ocean Dipole, and the Pacific Decadal Oscillation (PDO). So, one needs to separate anthropogenic influence from natural factors. In this respect, we found that PDO has contributed to the observed long-term growth of IPWP about 12-18 per cent and the remaining change is largely due to anthropogenic forcing.

In layman terms, how much has the IPWP really warmed in the last few decades? What has been the trend especially since the 1990s?

IPWP has warmed about 0.3 degree on average and expanded by 32 per cent during the past 60 years. Since the 1990s, the warm pool warming and expansion has been slower consistent with global warming “hiatus”, representing its close link or large contribution to the global temperature change. What we find interesting is that although the total IPWP has expanded by 32 per cent, the warm pool expansion in the Indian Ocean sector (51 per cent) has far exceeded that of the warm pool in the Pacific Ocean sector (22 per cent).

How much have greenhouse gas (GHG) emissions contributed to the excessive warming of the IPWP? If it could be expressed proportionately, what would be the share of GHG emissions?

Greenhouse gases have a lifetime of 100 years or longer. So about 540 Gt of carbon emitted since the Industrial Revolution has likely contributed to the recent IPWP expansion. Specifically, 40 per cent of GHGs emitted remain in the atmosphere on average (the other 60 per cent are stored by ocean and land) and is thought to have been heating the surface, including IPWP.

Your study says the tropical Indian Ocean has warmed more than the tropical Pacific ocean? What are the likely impacts of this difference in warming in both regions?

Yes, this has resulted in the Indian Ocean warm pool expanding by 51 per cent during the past decades compared to the Pacific part (22 per cent). This contrast in ocean warming seems to bring different impacts in rainfall patterns. Larger expansion of the Indian Ocean warm pool likely increases rainfall over the western Indian Ocean as can be seen from the recent observations. If the opposite occurs, that is, the Pacific warm pool expands more than the Indian one, rainfall decrease is expected over East Asia. So understanding the asymmetric change patterns of IPWP will be important for predicting possible impacts of the future IPWP changes under global warming.