Do you consider drought a direct manifestation of climate change or is it entirely man-made?

The correct answer is that it’s neither this nor that. Drought is a normal phenomenon of climate. It’s a natural hazard inherent to the normal vagaries of every type of climate. However, the drought associated with different types of climate differs in terms of severity, duration, frequency of occurrence and spatial extent. 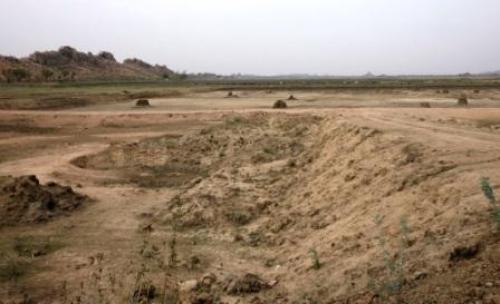 Climate change is expected to make drought worse. As for human actions per se, they do not cause drought, however, they can either increase or decrease the vulnerability to drought.

Areas where natural resources such as land, water, rangelands and ecosystems have been degraded because of mismanagement (are) more vulnerable to drought impacts.

What lessons can India derive from other arid regions of the world in water harvesting and management?

In my view, a valid lesson that India can learn from other regions of the world is the need to adopt proactive drought management policies and to materialise them at the state or local level in drought-prone regions of the country.

Some of the well-known drought management strategies exist on paper in India. However, they have not been developed through the right consultative processes and, as a result, they were not implemented.

Is Africa more drought-prone than other regions of the world? What is the long-term solution to end the calamity in several African countries?

Africa is not more drought-prone than other regions of the world that have similar climates to those of Africa.

People tend to confuse between drought, the phenomenon, and the impacts caused by this phenomenon. The same drought episode with given intensity, duration and spatial extent (will) cause different impacts depending on the vulnerability of the area that it hits. The more vulnerable a society is, the more it is impacted by drought and vice-versa. What makes drought more visible in Africa is the fact that many African countries have high levels of vulnerability to drought (and to other natural hazards).

Making an end to the calamity that drought causes in many African countries as well as elsewhere is possible. There is nothing that humans can do (to) stop drought per se, but they can stop the scourges and (the) suffering it causes. The long-term solution resides in building societal capacities to withstand the shock of drought impacts.

This requires the adoption of pro-active drought management policies and the implementation of long-term plans of action aimed at lifting the vulnerable sections of the society.

An important agenda of the SDGs is achieving zero hunger by 2030. Do you think it will be feasible given droughts in many parts of the world (India, Africa, Latin America etc)?

The fight against drought should indeed be an integral component of the strategy to achieve this SDG, and more so, for drought-prone countries.

Achieving zero hunger is not an insurmountable goal for these countries. It will not be easy for sure, but it is not impossible either. This will hinge essentially on the priorities set forth and (the) political will of these countries, but also on the engagement of development partners and the international community. These countries will not be able to achieve this goal (and the other SDGs) without external financial and technical support.

What we know today is that climate change will cause an increase of drought severity, frequency, duration and spatial extent in many of the regions that are already heavily affected by drought.

For some of these regions such as eastern Africa this increase is already visible today and is likely to be exacerbated in the future.

Investment in agricultural and rural development is a real driver for getting (the) rural population out of poverty. Agriculture, including fisheries and forestry, is the main source of income and livelihoods of these people.

There is a consensus among drought management experts that agriculture is the first sector to be affected by drought and also the most impacted one. As such, this sector deserves the first priority in terms of actions and measures aimed at building resilience to drought.

Effective adoption of proactive drought and flood management policies is an integral component of adapting the agriculture sector to climate change as far as extreme events are concerned.

How will climate change impact food production through changes in water availability? Which regions of the world will experience severe water shortage in the years to come?

It’s through water shortage that climate change and drought impacts materialise and cascade through socio-economic and environmental dimensions of societies.

A reduction in water availability affects food production and the livelihoods of people who depend on agriculture and ecosystem services. Food security becomes the fundamental issue for these people when water shortage occurs. 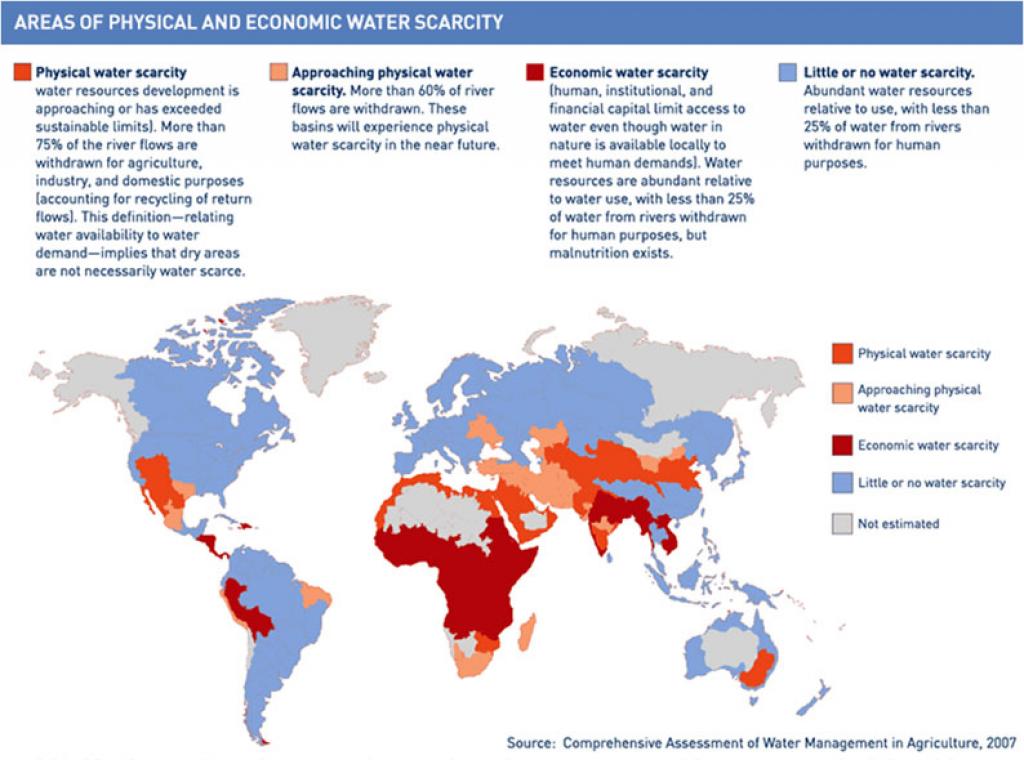 Agriculture accounts for the largest share of water use globally; however, it is the first sector to be impacted when water shortage occurs because of the priority of other sectors such as domestic and industrial supplies.

According to the FAO, water scarcity already affects every continent with around 1.2 billion people, or almost one-fifth of the world's population, living in areas of physical scarcity and 500 million people approaching this situation.

Another 1.6 billion people, or almost one quarter of the world’s population face economic water shortage (where countries lack the necessary infrastructure to take water from rivers and aquifers).

Water scarcity is among the main problems to be faced by many societies in the 21st century. Water use has been growing at more than twice the rate of population increase in the last century, and, although there is no global water scarcity as such, an increasing number of regions are chronically short of water.

The regions most affected by physical water scarcity are the Near East and north Africa, a large part of southern Africa, central Asia, large parts of India and China, south-eastern Australia, parts of central and Latin America. (See map below)

Will climate change (read extreme weather events) be the only driving factor behind non-availability or less availability of food?

If we are talking about the global level, there is still enough water to produce enough food for the world’s population and this will also be the case for the year 2050 and most likely beyond.

Models do not allow making long-term forecasts with sufficient levels of accuracy, especially because we don’t know how the models’ inputs will change.

In general terms, the production of food at the local or national level is very much dependent on the amount of water available.

Several water-scarce countries are already in a situation where their available water resources do not allow them to produce enough food to cover their needs.

The predicted increases of water scarcity stemming from climate change will very likely affect further the food production capacities of these countries.

Solutions to use the available amounts of water more efficiently also exist and their adoption will contribute to alleviating the problem of water scarcity.

How can India ensure water-availability in its drought-prone areas. Can the traditional methods of water management be an answer?

India is one of the countries that have a long experience in managing water scarcity. It has a wealth of both modern and indigenous knowledge for adapting to drought and water shortage.

What’s probably missing is the effective implementation of a strategy that would allow the existing knowledge and experience to be up-scaled and generalised in all drought-prone areas.