'Permaculture potential is huge in India'

Is permaculture primitive wisdom or a new concept?

The concept of permaculture is a fairly new one developed by Bill Mollison and David Holmgren in the 70s and early 80s. It is an ethical and positive design science, which helps in putting together various elements (plants, animals, technologies, social structures, economics etc) in a thoughtful manner. The aim is to provide for the needs of human beings while working with nature.

Most ancient systems were developed when the human population was less and the world around us was abundant in natural systems. Till population explosion and the Industrial Revolution, these systems were quite effective in providing sustainable human habitations. However, since then a lot has changed.

A permaculture designer considers the situation as it exists now, and analyses it philosophically and practically. He or she then designs systems where sustainability and abundance are guaranteed. In this process, the designer draws extensively from modern research as well as pre-industrial and ancient systems to search for solutions, techniques and methods. Permaculture is not a revival of ancient wisdom. It is an evolution of culture itself into one that is sustainable and permanent.

Where does India fit in into the global situation when it comes to permaculture?

India is in a unique position. It has a huge population, but does not have a vast land like the US. The country still has many of its traditions intact. A lot of places are using pre-industrial techniques to build houses, do agriculture and fishing.

In a global perspective, India has great potential for inventing, implementing and innovating sustainable systems. It can be a forerunner in the development of sustainable and resilient systems in agriculture, construction, economics and social sciences.

Also, India is heavily dependent on external resources for sustainability. Our dal comes from other countries while we poison our lands with pesticides for growing sugarcane, cotton and tobacco and export these to other countries. Unless this situation is solved, India will increasingly be a problem than a solution. However, if we turn this around, we have the chance for bringing about a positive change within the least amount of time.

In India, if we increase the productivity per acre by even 1 per cent, it makes a huge impact for providing resilience. Using permaculture design, we often find that we can increase productivity of a land, per unit area, by about 40 per cent on an average, and up to 35 times (3,500 per cent) in some cases (intensive zone 1 gardens). 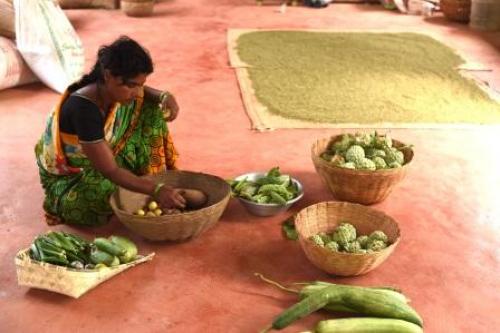 The potential for permaculture in India is huge. Mere revival of ancient systems does not ensure this, but only a responsible and thoughtful approach, along with a keen sense of ethics and design, can make India sustainable.

How permaculture blends the modern and the traditional farming?

Permaculture considers traditional methods and includes them in design. In terms of farming, the opportunities are endless when merging the ancient and the modern. Using modern technologies, we can reshape the landscape, so that it harvests a lot more resources like water and arrests erosion. We also have the huge opportunity of worldwide knowledge where we can adopt and also adapt to traditional systems practised in one geographical area.

Consider the fish-rice cultivation in Southeast Asia. It is a traditional system that has not yet been adapted to Indian conditions fully. However, it has a huge potential of increasing the productivity of land by up to 40 per cent. Similar is the case with the duck-rice system developed by Takao Furuno. Thanks to modern resources, we can research, experiment and adapt these systems to our scenarios. The possibilities are endless. We have made great leaps in science where we have technologies like compost tea, which can rapidly bring back fertility to the lands.

Now, permaculture is not limited to farming alone. Every aspect of human habitation—from production, distribution, consumption and waste management to construction, transportation, storage and economics—can be redesigned using permaculture principles.

Will permaculture be able to feed the world?

There is no doubt about it. The food crisis of the world is largely artificial. It is an issue of distribution and not of production. We reportedly lose about Rs 58,000 crores worth of food in wastage in India per year before it even reaches the plate. That’s about 40 per cent of all food produced.

With good design, we can make every bio-region abundant. An intensive permaculture garden produces up to 35 times the amount of food per square metre when compared to a conventional farm, with less than 20 per cent of the resources used.

There is also the issue of quality of food, nutrition and availability. Using permaculture design, we can create all the nutrition requirements of the world on just 4 to 6 per cent of land in comparison to how much land is being used right now.

Currently, about 1.4 acres of land is required to sustain one person per year using current systems in India (Source: FAO). Using permaculture, this can be vastly reduced, and in many cases, an entire family of four can be sustained on just 1.5 acres (0.607 hectares).

One of the core issues that permaculture tackles is the issue of resources. Using design, we focus on conservation and proliferation of a given resource, be it sunlight, water and soil. That is the fundamental basis for abundance using permaculture.

Climate change is producing scenarios of wild temperature swings, unseasonal rains and protracted droughts. Permaculture produces systems that are diverse, and thus, increases stability. In fact there is a permaculture maxim that every designer keeps in mind, which is said to have been coined by famous permaculturist Geoff Lawton. “Meaningful interactive diversity leads to stability, which leads to fertility, which leads to abundance.”

Consider a farm which grows only cotton. Any amount of unseasonal rains, or even a cloud cover in the case of a crop like mustard, can ruin the entire production. The monoculture landscape cannot handle variables in conditions, and quickly collapses into a problem rather than being a solution. 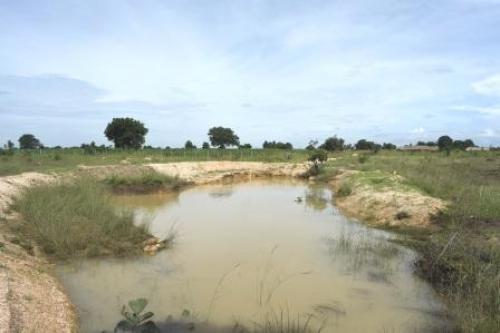 On the contrary, a permaculturally-designed farm has enough diverse elements that produce very well in general and exceptionally well under variations.

In designing a semi-arid landscape, a good designer selects local species, but also selects those species that thrive under dry conditions. In cases of heavy rainfall, the water is harvested, soaked and stored.

Right now, regarding water, we are in a strange situation. Areas that receive floods are labelled as “drought prone” in many cases! But when we look at the actual amount of rainfall in a given area, in many cases, there is more than enough water to support all human activities.

Since they are not designed with a resource-conservation mentality, many of our farms leave out most of the rainwater that falls. Exploitation of groundwater resources is at an all-time high. This came about because of lack of diversity and design. In the current scenario, the entire farm is made “flat” with bulldozers, and only one crop is planted, with not even a single inch of area left for storing extra water for future use.

With permaculture, we use earthworks to harvest rainwater, store it and soak it into the landscape. We also improve soils to improve soakage of rainwater, and thus, recharge local water bodies and aquifers. We create food forests, which not only reduce water usage, but also increase the overall rainfall potential. We consider the effects of sun and shade and windbreaks to reduce water usage.