Sweden will pass a law next year to become carbon-neutral by 2045. Eva Svedling, the State Secretary to the Minister for International Development Cooperation and Climate, who recently visited India to discuss Indo-Swedish collaboration on climate change and sustainability solutions, tells Rajat Ghai how Sweden plans to achieve its climate change mitigation goals 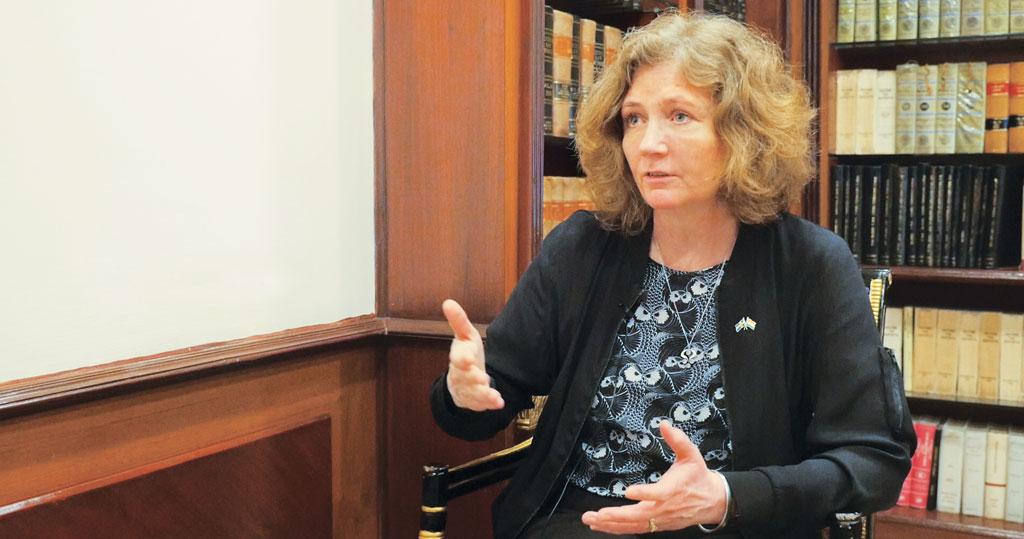 To become carbon-neutral by 2045, Sweden has to cut 85 per cent emissions from 1990 levels by 2045. How is Sweden planning to achieve this goal?

We are taking a number of actions. Under the climate law, there will be a new climate policy framework and a national advisory board which will monitor climate politics not just of the present government but also of successive ones. Our climate goals are ambitious because climate change is affecting everybody, including Sweden. We have problems regarding air and water pollution as well as temperature rise. For instance, temperatures in the Arctic were the highest in 2016 ever since record-keeping began (in 1900). We will reduce emissions from the transport sector by 70 per cent till 2030. Action will be taken in the areas of electrification, road transportation, and sustainable cities. We also have a target of becoming 100 per cent renewable by 2040. We plan to increase awareness among our population and the use of biofuels in transport as compared to fossil fuels.

Sweden was to phase out nuclear energy by 2010 but has not yet done so. What is the current regime's stance on this?

I represent the Green Party, which has its roots in the environmental, anti-nuclear power and peace movements. We strongly advocate phasing out nuclear energy, for which we have a twin-pronged strategy. On the one hand, we advocate that the world’s nuclear powers must have the highest standards of security and safety. On the other, we aggressively market renewable energy as a suitable alternative.

A burning issue for Sweden, as indeed for those in Scandinavia, is US President Donald Trump's policies. [This interview was conducted before Trump withdrew from the Paris climate deal.] How will you engage with the Trump administration on climate change?

Our government is currently making an ambitious agenda for cooperation among Nordic nations on matters of climate change. In April, the Deputy Prime Minister Isabella Lvin signed a climate cooperation and collaboration agreement with the government of California. This is one way of identifying new avenues in the face of the climate agenda of the US Federal government. Sweden also wants the European Union (EU) to be an international leader on climate change. This is not easy in the present circumstances as there are difficulties within the EU. Besides, member countries have been affected by the US administration's stance and have moved into a protectionist mode regarding their industries. That needs to be addressed and we need to have a way forward on transportation and renewable energy.

Now that the US has taken a back seat, how can Sweden push the EU to raise climate ambitions and take leadership of the global climate change regime?

By taking leadership, having an ambitious agenda and keeping up the international dialogue. We need to sit around the table with the US and countries such as India and China and be clear that we have to move together as there are no alternatives.

The Arctic is melting fast. How does Sweden plan to tackle this, especially with member nations of the Arctic Council (the US, Russia, Canada, Iceland and Norway, Finland and Denmark)?

We will do everything we can. Signs are worrying, but Sweden will not back off from its principles and it also has the support of the members. Of course, a big actor such as the US can influence and take actions that are not good for the Arctic. We need to be diplomatic and stand for our values.

Do you think Paris 2015 will work in the long run given that it is not legally binding on the signatory nations?

We have to make it strong enough. What happened in Paris was that the entire international community agreed upon the direction, problem and challenges that we face. There was a quick ratification, which is a strong signal. We now have a momentum and have to use the Paris Agreement for a strong agenda forward.

Should developing nations be allowed to use fossil fuels like the West once did to boost their development?

They should not go through all the stages that we are going through because we don't have that much time. Together we need to create solutions and see how to define the road ahead.

What can India learn from Sweden in the fields of smart energy, urban transportation and waste management?

The prime ministers of the two countries made a joint statement in 2016. We will continue to deepen our collaboration on climate. We can exchange experiences, knowledge and technology. Swedish businesses are willing to be part of the future dialogue on transportation, electrification in the transport sector and setting an agenda for gender equality in transportation, energy and waste management. We have much to learn in waste management. We will see a good collaboration between the two countries in the future.