'Developing countries are treated in a very unfair manner'

Bernarditas Muller, a seasoned member of the Philippines negotiating team, is among the rare few who call a spade a spade. Speaking to Indrajit Bose during the ongoing climate talks at Bonn, she outlined the importance of the UN Framework Convention and provided insight into how the developed world represents the epitome of inaction and how some developing countries are still so naïve. Edited excerpts 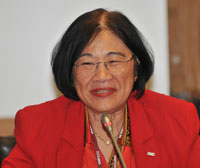 There is this accumulation of greenhouse gases in the atmosphere, and developed countries have contributed to it. They have occupied the atmospheric space and earned wealth. According to the Rio principles of 1992, they must share this wealth with countries that have little or no responsibility in contributing to emissions. Now, let us look at the principles of the Framework Convention. They provide the context. The Convention clearly says that action has to be divided into what all parties will do—common—but in a differentiated manner. And commitment provides the embodiment. Article 4.2 of the Convention states: the developed countries “commit themselves specifically as provided”. “Commit themselves” means mitigation. But it is not for us. The whole Convention is a balance of that. On top of that, developed countries have other obligations—provision of financial resources, adaptation, transfer of technology. This is differentiation. Equity. Fairness. Now, if countries refuse common but differentiated responsibility (CBDR), they also refuse financing and other obligations. It’s simple for them: if I don’t owe you anything I will not pay you anything, right?

I will take you back to the Convention again. Look at Article 4.7. It states, “The extent to which developing country parties will effectively implement their commitments under the Convention will depend on the effective implementation by the developed country parties of the commitments of financial resources, transfer of technology and will take fully into account that economic and social eradication and poverty eradication are the first and overriding priorities of the developing country parties.” This remains true! But what has been happening so far is years of efforts to shift responsibility to developing countries. If you ask developing countries to reduce one tonne of carbon, it will cost them more than a developed country. For instance, some people in my country earn less than $2 a day. And you are going to ask these countries to set up common accounting rules for emissions reduction? Why should developing countries take on low emissions development strategy when they already have low emissions? How can you ask a man who is eating once a day to diet? First, provide the man with the possibility to have three meals a day and then you must give that man or the family the recommendation that they must not overeat or waste their food. It is the same with emissions.

Has the developed world fulfilled its financial commitments? Look at how much you are getting. Even the GEF (Global Environment Facility) grants are smaller parts of a larger World Bank loan. And they call that co-financing. I call these sweetener for loans. There are studies that have analysed the financial pledges. It goes down and down and down all the way! Deduct fees, administrative charges, etc. How much are you left with? Consider the World Bank.

It is a trustee, an implementing agency and an administrative facilitator. Tell me, how much are they getting on all these fronts. The fact is no climate financing is new and additional, as it should be. Break down the ODA and find out how much is climate finance. You need to see it with a very clear eye. You will find that developing countries have been paying for themselves. It is so unfair.

See, the Annex I countries always wanted to review our communication. Monitoring, Review and Verification (MRV) is something they have always wanted. Under the Bali Action Plan, developing countries agreed on Nationally Appropriate Mitigation Actions (NAMAs) if it was supported by finance in a measurable, reportable and verifiable manner. This means that not only do we MRV the actions, but also the financial support we received for it. But, where is the MRV of support right now? Where is transparency in that aspect? Not just that, developed countries are resisting with all their might on this issue. And some developing countries don’t realise that they are getting the short end of the deal. They talk of MRV as if it were a responsibility for them and not for developed countries. The fact remains that developed countries have not given that kind of information. And yet here, we are tripping all over ourselves. We are too naive.

On being taken for a ride

The way things stand now, if you have MRV of your NAMAs, isn’t that a commitment? It’s tantamount to a commitment. And we have accepted that. Now the developed world nations are very upset because some countries, including mine, have not put in NAMAs. And we have not put in our NAMAs because of the way they have set it up. They will finance it if they like it. But for me, I need financing to identify my NAMAs. I need to know the sources of emissions in different sectors such as health, transport, industry, agriculture and so on and so forth. And then you tell me you will pay me if you like the NAMAs! Read Article 4.7 of the Convention again. It clearly tells you what developing countries will do, will depend on the effective implementation of financing.

On what has changed over the negotiating years

Climate change is worse. What’s changed is that finally developing countries are paying from their pockets. And all these people blah blah-ing about the environment, they are the ones doing mining in the fields. Mining has emissions, health problems, etc. Do you think they are paying us for that? They are just taking our resources. There is no internalisation of this externality. This world is so unfair to developing countries. Remember 2°C is the mean. It could imply 4°C rise for Africa. Do you see the implications? They will simply burn. India has more poor people than the entire population of Africa. Are you going to peak and duck your people into poverty? Do you know what is business as usual for India? Can we accept a deal that is based on such inequity?

See, the objective is to reach the moon. You are rich and I am poor. How much are you going to pay so that I can reach the moon? What is lacking is what is the sum that we need to reach the moon. You will reach because you already have the satellites, you already have the launching pads; I don’t have anything and yet do I have to give more than you? You have an objective of less than 2°C increase and you are telling me that I must contain my emissions. It’s not fair. Unless we have a clear delineation of how much you are going to pay, especially with an obligation to pay, there can be very little progress. The new deal is about everyone participating and everyone taking a commitment. The stress is on ‘everyone’ but everyone must do his or her ‘fair-share’, taking into account historical responsibility. And also what does it mean to reduce emissions for someone who already has very low emission? It means you pursue your sustainable development by decoupling or delinking it from emissions. For us, mitigation is prevention and avoidance of emissions, not reduction.