‘Globotics could disrupt lives of millions of skilled workers’

Richard Baldwin, professor of International Economics, talks to DTE on protectionism, globalisation and the rise of robotics 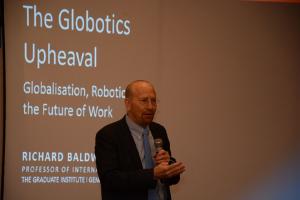 The last few years have seen resurgence in “protectionism” across countries, especially the United States (US), which has led to trade restrictions and barriers in the form of tariffs and quotas to protect domestic industries.

Protectionist policies have threatened international trading regimes and led to “trade wars”. On May 31, 2019, US President Donald Trump announced that they would end preferential trade treatment for India on June 5.

Richard Baldwin, professor of International Economics at the Graduate Institute, Geneva, and author of The Globotics Upheaval: Globalisation, Robotics and Future of Work was in India to speak on ‘The New Protectionism’. He spoke to Down to Earth on the sidelines of his book launch.

Q: The term 'new protectionism' has been in use for some time. How has it changed over time and what do you make of it in the current global scenario?

Actually it’s the revival of an old one. There used to be a 'new protectionism' in the 1980s. We called it 'strategic trade policy' and the idea was that you were going to use a trade policy in a more pointed way to promote industries.

I don’t think there is anything new about 'new protectionism'. But right now the forms that are more obvious are really illiterate. So, the tariffs from Trump are the most obvious example of the new protectionism. His idea is to promote US industries but when you put tariffs on imports of steel and aluminium you make US industries less competitive because countries like Mexico and Canada have low price of steel and hence, people will be more inclined to set up industries there instead of the US.

When you make your imports more expensive, you make your industry less competitive. So his (Trump’s) idea was to attract industry, but because he was thinking like the 1970s that if you put up tariffs industry will come in; it backfired.

It’s 20th century-thinking applied to 21st century problems. Even if I agreed with what they wanted to do, they are doing it the wrong way. If we look at the statistics in terms of manufacturing output, trade surplus, export, etc, there is no need for this kind of protectionism. It’s not the solution to anything.

Q But how did we get here? Only a few years ago, there seemed to be a consensus that everyone should be working towards more open markets, free trade and there should be international cooperation…

It’s mostly about China. The way China advanced upset many, especially in terms of technology and subsidisation. It’s not any different than what the US did, what Japan and Korea did.

The difference is: China is so big and so good at it. It has disrupted manufacturing around the world and that has made many people upset. But the US could have got Japan, European Union (EU) and Korea together by confronting China to change its policies like the US did with Japan in 1980s; instead Trump started a fight with everybody.

First thing he did was put tariffs on steel and aluminium coming from Europe, Canada, Mexico, Korea and Japan. So everybody retaliated against the US.

This is why the US is at the centre of its own little trade war with tariffs going out tariffs coming in, while there is free trade everywhere else. This new protectionism is bad for the US, it’s bad strategically and it’s going to backfire politically, I believe.

Q: Does it have something to do with what’s being called the ‘New Right’ and the rise of populist leaders around the world, and countries focusing more inwards?

There is nothing new about nationalism. What was unusual was that we liked liberalism for a while. Of course people like nationalistic leaders to look after them. The question is: how wise are we in doing that? And the US hasn’t been wise.

The way I believe it happened was with the rise of China and off-shoring of manufacturing, not just from the US, but from G-7 countries which led to very rapid de-industrialisation in those countries.

In 1990, two-thirds of all manufacturing was done in G-7 countries and now it’s below half. So in just two decades there was massive de-industrialisation, and on top of that automation has reduced even more jobs across in the factories across the G-7 countries.

At the same time, the service sector, the IT industry was growing so the US was doing quite well, and EU was doing okay, but there were some left behind; and especially in the US they were just ignored and they had to fend for themselves.

To add to that, the 2008 global crisis led to a systemic slowdown of growth all over the world. The roots of protectionism were economic, it was more of a response at a community level and there was a need to blame someone — immigrants and China was the convenient option.

So I think, a lot of the backlash wasn’t really against globalisation. In Europe, a lot of it was migration shock. So, it’s the economic malaise which led to groups of people being very upset and it lasted for so long that they stopped listening to the Centre-Right parties or Centre-Left parties.

This gave rise to populists who could promise things — they may not have solutions, but they have promises. And the new protectionism is just a part of it.

Q In your address you mentioned that you want to debunk anti-globalisation narrative as a global phenomenon. Can you elaborate?

If you look around, the rise in tariffs we have seen in last couple of years have been driven by Trump, but there is a reaction in Europe to more nationalistic parties which are anti-foreign or anti-EU. This was all a consequence of the “anti-migration shock” or the general background of economically bad times. It’s not global.

Japan’s not getting protectionist; Australia and New Zealand are not; developing countries are liberalising, by and large. The current scenario with Trump and China is not a small thing and it looks like it could possibly fall out of control. It looks like it’s winding up to a new cold war over Huawei and it could get nasty.

In many countries, there is anti-immigration (sentiment) and not anti-globalisation. There is an increased fear of others, which is economic, social as well as cultural. So in some sense, it is 'new localism' than 'new protectionism'. For example, Brexit was a strange thing, but at the same time they want more free trade so it wasn’t anti-globalisation.

Q: Any particular observations for India? Recently, India constituted a task force to look into ways to reduce its import dependence. And we have also have the ‘Make in India’ scheme.

If you take mega economies like Germany, the US or Japan, 80 or 90 per cent industrial inputs for their industries are made in their own countries. China is moving that way, it is becoming a ‘normal mega economy’ where it has a big industrial base and there is no mystery to it.

So it’s not unusual for India — the next mega economy — that is trying to localise more of its supply chain as long as it’s done intelligently. That’s what Korea and Japan did when they were developing. Developing local industrial capacity is a good idea. But that is an industrial policy and not a trade policy.

You have to be careful about trade policy. We live in a world where we have to import to produce. Leading manufactures organise supply chains and they put these things together. Lots of it made in Germany, made in the US. So countries have to source intelligently from all over the world.

Q: In your book you argue that the next threat and opportunity is ‘globotics’. You call it bigger threat than automation which can disrupt lives of millions of skilled workers. Do you think there is enough stress on it and the world leaders are paying attention?

Globotics is made up from two words: globalisation and robotics. A globot is a white collar robot, which is basically a software that automates a job; say for example a chat bot.

Earlier, you used to talk to a call centre employee and now the chat bot has replaced the person. The inhuman speed of this global transformation threatens to overwhelm our capacity to adapt.

When technology enables people from around the world to be a virtual presence in any given office, ‘Globotics’ could disrupt the lives of millions of skilled workers in most countries, including India — much faster than automation, industrialisation and globalisation disrupted lives in previous centuries.

Through telemigration, services become more traded, and since services are really cheap in emerging markets and expensive in rich countries people source them from where it’s cheap and sell where it’s expensive.

Earlier, that was impossible because of technical barriers, many of which were digital, and now the digital technology is making more people less remote so it’s easier to participate.