Down To Earth spoke to Kebede Worku, Ethiopia's State Minister for Health, on the turnaround that his country has brought about in the field of sanitation 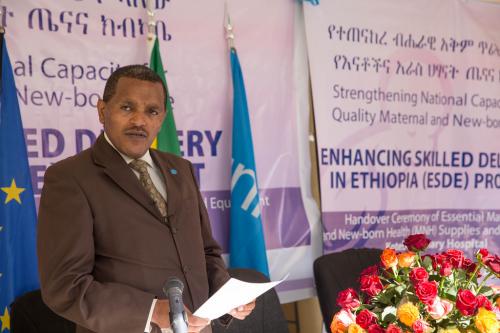 Open defecation was practiced by 44.3 million Ethiopians in 1990 and 28.3 million in 2015—That is an average reduction of 4 percentage points per year over 25 years. What, in your view,has brought about this change which made Ethiopia a classic example in the region?

The first and foremost reason for this success is Ethiopia's conducive environment and decentralised system which allows communities and political leaders to discuss what type of health services are to be provided and also to monitor the performance together.

How much of your budget is spent towards water sanitation and hygiene? Do you have roles for non-profits and the donors in the sanitation sector?

Ethiopia spends 0.01 per cent of its Gross Domestic Product (GDP) on sanitation. Further, there is a substantial public investment in sanitation services.

Key donors, multi-lateral and bilateral organisations and non-profits are involved in many areas of the country with different hygiene and environmental health components.

Some villages in India have failed to remain open defecation free (ODF). How do you ensure that rural regions in Ethiopia remain ODF?

Ethiopia's Federal Ministry of Health, along with regional health bureaus and development partners, have developed the Community Led Total Sanitation and Hygeine (CLTSH) Training manual, CLTSH implementation guidelines and an ODF verification and certification protocol. Once toilets are built, their use is verified through verification and certification committees at each level—from kebele (village) to national level. Once ODF state is attained, one of the indicators to ensure that it is sustainable is to judge the performance of kebele, Woreda (district), zone and regional level political leaders. After the declaration of ODF, the toilets are handed to trained environmental and religious leaders from the community. A follow-up flag award is given for the kebele residents based on their ODF status i.e. green for ODF, red for slippage.

Does good sanitation help the health and economic situation of citizens?

Between 2000 and 2016, open defecation reduced from 82 per cent to almost 32 per cent and toilet coverage increased by 50 per cent. Under-five mortality reduced from 166 deaths per 1000 live births to 67 deaths during the same period.

Health benefits are usually considered to be the most significant impacts of hygiene and sanitation, but other factors are also important. Safe, private sanitation facilities can help women and girls to be secure and healthy, can encourage girls' attendance in school past puberty, can help preserve the dignity of disabled people and also can improve the environment.

The effect of poor sanitation in society is not only limited to health but also to an economic and welfare dimension and to the environment. The Economics of Sanitation Initiative (ESI) desk review conducted by professional service firm WSP and the World Bank 2013 indicates that poor sanitation costs Ethiopia Birr 13.5 billion each year, equivalent to about Birr 170 per person per year or 2.1 per cent of the national GDP. Yet, eliminating the bad practice would require only 6 million latrines to be built and used.

How do you ensure self-disposal of fecal matter in non-sewer areas? Is your country looking in to decentralised wastewater treatment as an option in non-sewer countries?

Almost all rural parts of Ethiopia are non-sewer areas. Self-disposal there is ensured by health extension workers based at the community level. For the non-sewer urban community and urban towns which have sewer systems, the urban municipalities in collaboration with the urban health sector ensure the self-disposal.

The Ethiopian government is currently using traditional decentralised systems in most parts of the country for the treatment of sewage, The operation and maintenance of onsite disposal systems is left to homeowners, which has caused problems because many traditional systems currently in use do not provide a treatment level that is needed to protect public health. But with a rapidly increasing population and decreasing water resources, wastewater is becoming a significant resource.