Want poor families in north India to immunise their children? Offer the parents a small bag of lentils as an incentive and vaccination rates make a startling jump. Does charity always work? Poor Africans, for example, do not value the mosquito nets given free. Massachusetts Institute of Technology economists Esther Duflo and Abhijit Banerjee tell these stories in their new book Poor Economics. Anoo Bhuyan met them at the ThinkFest conference held in Goa in November. Edited excerpts of the conversation 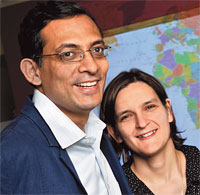 Your book Poor Economics dispels clichés associated with poverty, like there is nothing interesting about poor people’s economic existence because they possess so little. What are the most striking of these clichés?

Duflo: The Victorians thought the poor were slothful, un-virtuous and impatient and that is why they were poor. Today, many think that the poor starve. At least this is the first image associated with poverty in the West. This is also prevalent in public discourses. Our book highlights how the microfinance movement and social businesses have painted the poor as those who are very entrepreneurial and ready to pull themselves up by their boot straps.

Banerjee: We have been working with policy makers. One cannot just write a book and hope that it will be effective. The book does help. People seem to read it. But there is no way to make an impact on policy without talking to policy makers. The Poverty Action Lab at the Massachusetts Institute of Technology, which we are associated with, has a policy team working in India, USA, Chile and South Africa. The team’s job is to take lessons from our experiences and try to get policy makers pay attention to it. But how much this is embedded into policy is a bit hit or miss. The least we can do is make the ideas accessible to people.

Your book talks about how separating the cause and effect is difficult. For example, does hunger lead to poverty or does poverty lead to hunger? There are further troubling decisions like whether we should dole out aid, and whether to give mosquito nets or fishing nets. Is there a way to prioritise what to deal with first?

Banerjee: The point is do we know sure ways of ending poverty. I think there are very few factors that can propel someone directly out of poverty into wealth other than if we could just hand over money.

But I think there are still a bunch of stuff that we can prioritise to tackle poverty. Children should not be taught on the basis of some fantasy syllabus that the government has constructed.

They should have access to free, highly subsidised or incentivised immunisation. There are also easy ways for people to access clean drinking water.

Duflo: Another thing, which we do not know how to do but wish we could, is some form of insurance for people, especially for health issues.

Are you worried that poverty is not getting as much attention today as it should because we are busy debating climate change, war, globalisation or the current debt crisis?

Banerjee: We see major shifts within poverty policy. The mindsets of governments are changing. People worldwide are more willing to give cash. It is also an active period in innovations in antipoverty policy. In India, for better or for worse, we have MGNREGS (Mahatma Gandhi National Rural Employment Guarantee Scheme) and we are talking about the right to food. I do not necessarily think that all these are good ideas but I do not think they reflect an ignorance of the problem either.

Many feel education and awareness are the silver bullets to alleviate poverty. But your book says the problem is not only that not everyone goes to school but also that they do not receive the knowledge they should.

Duflo: One of the issues that we tried to summerise is that although the situation of education is not very good, it seems eminently solvable. It is not a difficult task to teach a child to read. So in that sense, if we had the willingness to change the system and start considering basic skills as the goal, it would create a basis to take care of a lot other issues.

Educated people are more likely to know how to use fertlisers or how to take care of their children.

Banerjee: If we could deliver real awareness, no doubt it will help. But it is not well-understood if we can deliver it. So if we keep telling people that “do these good things and good things will happen,” people seem to screen those out quickly. For example, people have been advised to boil water for a long time. The solutions need to be placed well in the context of people’s lives and should be so easy that people will want to implement it. If you ask them to do something complicated, they may try once but not do it. This is the real problem. We are too willing to say that once we offer education everything will be fixed. I am not sure if there is any evidence for this. 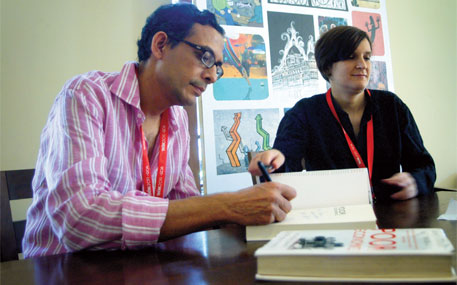 Duflo: We have such stories in the book. For example, we worked with a nonprofit and the government in Rajasthan to monitor nurses and get them to go for work more often. By the end of one year of the programme, their attendance reduced further. So that was not a success.

But analysing it shed some light on how the system works. In this case, there was collusion between the nurses and their supervisors, partly because the supervisor did not really buy the agenda that it was important for them to come to work. So analysing the reasons for failures helps us understand roadblocks and ways to solve them.

For a poor farmer, chemical fertiliser may appear to be the key to higher produce and he may choose to use a lot of it. In such a scenario, how do you sell environmentalism to him?

Banerjee: If you tell a farmer that “look, nobody else is doing anything but you need to save the world”, why would he? If we care about the farmer, we should pay for him to have a decent life.

During a survey in Delhi, we asked people what they did not like about the city. Most said it was the environment. The poor are very conscious of environmental quality and are willing to make it better. We should offer the poor realistic options and make those cheaply available so that they do not lose in terms of standard of living.

Is having more money the answer to have a better living standard? Amartya Sen defines poverty as not the absence or presence of money but not having enough to realise one’s full potential.

Duflo: I agree with Amartya Sen. But it is a bit patronising for those who have enough money to say that it is not about money. Not realising one’s full potential can be due to education or empowerment. But money definitely plays a role in this.

How do you stay optimistic and believe that change can happen?

Banerjee: A part of what we do is document success. What is striking is how many good ideas there are and how they are not taken up. We are optimistic because we want people to understand that there are good ideas out there. We can invent, but let us also implement.