Briton Susan Gole is a collector and historian of maps, especially those of India. She has published various books on the subject. She is also the president of the International Map Collectors Association. She was recently in India and spoke to Rajat Ghai on various aspects of cartography and geography 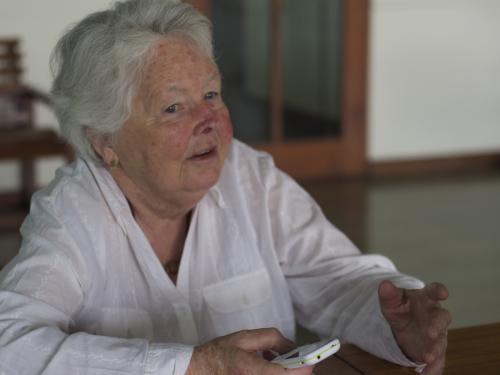 In popular parlance, geography and cartography are often confused with each other. Where exactly does one draw the line?

Geography is knowing about the earth and describing it. Cartography is drawing how that earth looks to us. “Khartes” is a Greek word which means a map. Whereas Geography is derived from “Geographos” and means writing about the world. “Geo” means the world or the Earth and “Graphos” meaning writing. Neither term is very specific about what they contain.

What are the reasons behind the low popularity of sciences like geography and cartography in India? Do attitudes of students in Western countries mirror ours? Or is the picture different?

I don’t think Western children are any more interested in these two subjects than their Indian counterparts. Take my country for instance. I am quite appalled that children in England are not taught where places are. They may be taught about agriculture in certain places, about different people living in different places but they are rarely taught about where places are. In television quizzes, they cannot tell you whether Birmingham in north of London or whether Delhi is north of Mumbai, which to me means that they are not learning geography very properly.

What can be done to popularise geography and cartography among today’s students?

I think children the world over still need to learn how to make their way on a map. I know everyone in England now uses a Sat Nav (Satellite Navigation System) in their car. You just have to fill in the addresses of the starting point and destination and then look at the screen in front of you. For one thing, that distracts your eyes from looking at the road so it is dangerous. I don’t have it in my car because I love planning a journey on a map. But hardly anyone in England can now understand a map. So they rely on a Sat Nav. They don’t know anything on the right or the left of the road they are on, which is what the map directs them to follow and they learn very little about the country around them. They may pass an English Civil War battlefield without knowing about it since that is not marked on the Sat Nav. They are thus missing out on such a tremendous amount of history of their own country. Hence, if people know where places are, to me it seems that they would appreciate their country more.

The Golden Era of map-making is considered to be the European Age of Discovery. How accurate were the maps drawn by European explorers and why?

These maps were not at all accurate. For instance, a map made in 1507, which was one of the first world maps to be printed, shows Bengal and Tibet in North China. This is because Marco Polo had mentioned them but did not specify where they were. So the cartographer, who had to put them somewhere on the map, put them in North China, associated with Polo. There are so many other discrepancies like that. There is a manuscript map showing the river Ganges as a straight line, north to south down to the Bay of Bengal and the text besides it says: “Ganges river, end of India”. We see errors in the first maps of India made by the English East India Company. There is an interesting one made by Sir Thomas Roe, who was sent by King James I of England in 1615 to the Mughal court at Agra. He lived there for four years. On the way home in 1619, he and the first mate, William Baffin (who discovered Baffin Island in Canada) made a map of India. But this one only shows North India. It does not have the peninsula at all. This map was copied for more than a century by other cartographers. The map also shows the origin of the Ganges at Haridwar, through the mouth of a cow (an allusion to Gaumukh?) and a lake beside it. Later cartographers either copied the cow’s head or made a lake. There are other inaccuracies as well for how can you know about a whole country by just sitting for four years in Delhi or Agra. But Roe’s map was so influential that thereafter, most maps of India were drawn on two sheets of paper in the Atlas, one of North India and one of South India.

A lot has been written about map deconstruction or inherent socio-cultural biases of map makers reflecting in their maps. One oft-cited example is the down-sizing of Africa by western cartographers while using the Mercator Projection, invented by Flemish cartographer Gerardus Mercator. Is that on the wane in the 21st century?

The Mercator Projection was a huge advance in the field of cartography because it is the only projection that allows a ship’s captain to sail in a straight line of where he wants to go. This was not possible before because the Earth is curved. It was the Mercator Projection which allowed this to happen. Regardless of which country is large and which is small, it was the only way by which sailors could know exactly how to chart their course. That is why it was very popular for a long time as it was very useful. Today, of course, you can change the projection citing that why should Europe always be at the centre of a world map. I have seen a map with Australia at the centre and another with China at the centre. So this is a convention that has grown up because it were the Europeans who were making maps at that time. There is no right or wrong about it. It depends on the time when the map was being made and the reasons for which it was being made.

We are so dependent on maps and mapping through modern gadgets. Can a person lost in the wilderness without any appliance find his or her way back home? In short, what geographic or cartographic guidelines does such an individual need to remember?

Such a person needs to know the direction of the sun, presuming it is not overcast. Once you know that, you can follow the course of the sun as it moves across the skies, and eventually, if you can keep to the sun in the right direction, you can land up north, south, east or west, wherever you want to go. I think that probably is the only way to find your way out because it is a human tendency to go around in circles, which won’t help.