Abhijit Mukherjee, a professor of geology at the Indian Institute of Technology, Kharagpur (IIT Kharagpur), was awarded the Shanti Swarup Bhatnagar Prize 2020 September 26, 2020, under the ‘Earth, Atmosphere, Ocean and Planetary Sciences’ category, for his research on groundwater.

The award citation acknowledged Mukherjee’s “groundwater studies on the availability of safe and sustainable drinking water”. He subsequently talked at length with this reporter on a range of critical groundwater and related issues across India. Edited excerpts:

Jayanta Basu: How do you feel after being awarded with the Shanti Swarup Bhatnagar Prize 2020? 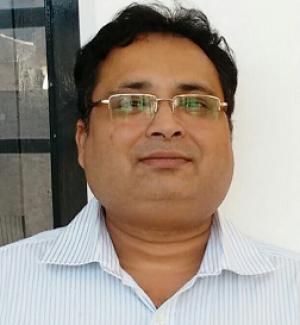 Abhijit Mukherjee: Yes, I am very happy personally, as it is one of the highest scientific awards in the country. But the award may be more important in the context that this is the first time anybody has been nominated for this prize for working on groundwater.

The journey has just begun as groundwater science and its research have never got the importance they merit. Civil engineers and economists usually call the shots in the groundwater sector while geologists and environmental scientists get much less importance. Hopefully, the situation will somewhat change now.

JB: What is the current status of groundwater in India? The Niti Ayog has predicted that major parts of the country will soon have no groundwater at all.

AM: I do not agree fully with the Niti Ayog report. I have been working on the country’s groundwater status and changing trends over the last two to three decades.

I have been using satellite data since 2010, including that of NASA as well as of the Central Ground Water Board. I have found that the situation is variable across India.

AM: The groundwater status has actually improved in states like Andhra Pradesh and Gujarat according to our study till 2018. This is possibly due to increased rainwater harvesting and water conservation modes applied there.

However, the groundwater level is depleting fast in many states. The rate of groundwater decrease was found to be the highest in Assam, followed by West Bengal and Bihar.

Satellite-based estimates actually indicate that the development of recent groundwater depletion zones is concentrated in unconsolidated sediments across the Indus, Ganga and Brahmaputra basins, in the northeast states and also in Punjab, Haryana, Uttar Pradesh, Bihar and West Bengal.

JB: But West Bengal has actually relaxed its regulation in 2011 on groundwater extraction.

AM: That might have worsened the situation. Socio-economic and other considerations might have pushed the relaxation. But it was proposed in ‘Vision 2020’ prepared by the state’s public health engineering department, in which I was also involved. Even the latest groundwater assessment shows that the number of groundwater-stressed areas has risen significantly in the last few years.

JB: You also mentioned that the drying of the Ganga has been related to the decline of groundwater levels in the country.

AM: The gradual depletion of groundwater is definitely contributing to the lowering of water volume in the Ganga. It is very important to understand that groundwater contributes significantly in maintaining the base flow of all rivers.

We found that the water level in the Ganga had depleted at various points in the range of 0.5-38.1 cm per year between the summers of 1999 and 2013. Interestingly, the groundwater storage in the adjoining Gangetic aquifers also depleted by about 30 cm per year.

Our estimates showed that in 2016, the base flow amount in the Ganga reduced by about 59 per cent from the beginning of the irrigation pumping age of 1970s. This clearly underlines the impact of groundwater depletion on river water.

JB: Let us come to the qualitative aspect of groundwater. You have worked a lot on arsenic contamination of groundwater in the country.

AM: Yes, I have been working on arsenic contamination since 1999 not only in India but also in other parts of the world. Initially, I worked in almost the whole of West Bengal — from Murshidabad to the Sundarbans.

Subsequently, my team worked in the entire Ganga delta, including Bangladesh. In our study, we tried to look at the broader picture, trying to find the primary source of geogenic arsenic in groundwater. We found that specific types of tectonic processes and plate collisions led to mountain building process and arsenic generation in groundwater. We are now in a position to predict possible arsenic-infested areas by using the findings, along with artificial intelligence.

AM: Yes, I did. I was part of IIT Kharagpur’s signature SANDHI project, that attempted to marry science with heritage. We worked in the subsurface region of Varanasi, both for architectural purposes as well as for understanding its geology, to assess the present stress and predict the future growth plan in the city. Our reports have all reached the Prime Minister through official channels.