Community management of ponds has been a success'

Mohit Kumar Ray, convener of Kolkata-based non-profit Vasundhara Foundation, says the city has been losing nearly 200 ponds each year for the past two decades. In an interview to Sushmita Sengupta, Ray, who is an environmentalist by training, says these ponds, called pukur in Bengali, are crucial to the city's ecology. Excerpts 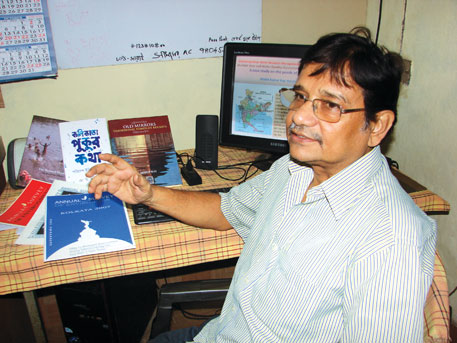 How many ponds are there in Kolkata and what is their state?

There have been huge discrepancies in data produced by government departments. The Kolkata Municipal Corporation (KMC) has carried out surveys from the early 2000s but is reluctant to release the list of ponds. In 2006, it published a list that said there were 3,874 ponds in the municipal area. But the list did not provide the proper location or size of all the waterbodies.

In 2006, the National Atlas and Thematic Map Organisation (NATMO), a government organisation under the Department of Science and Technology, published Atlas of Kolkata with detailed maps. The number of ponds marked in this atlas was 8,731. But the NATMO study was based on a 20-year-old database and, therefore, many of the waterbodies it listed actually did not exist.

In 2007, our researchers at Vasundhara Foundation used Google satellite images and found that the number of healthy waterbodies (those with clean water) was 4,889. Nearly 75 per cent of these ponds are privately owned, but used by communities. However, there has been no initiative after 2007 by any organisation to count the number of healthy waterbodies. Considering that 8,731 ponds existed 20 years ago as per NATMO’s study, we concluded that there was a loss of 3,842 waterbodies in the last two decades.

I have found that the majority of the ponds are not in good condition due to lack of maintenance and government apathy. Though a lot of them are privately owned, KMC has the right to take over the maintenance of neglected waterbodies. Filling up of ponds or dumping of waste by their side is also a common practice. In the past few years, KMC has been more active in maintaining some ponds, but their efforts are not sufficient.

Why are pukurs important to the city?

Kolkata is a city of pukurs. The city’s history can be told through the history of its water bodies. It has many places with the word “pukur” attached to their names. For example, Monoharpukur, Ahirpukur, Bosepukur, Thakurpukur, Paddapukur and Talpukur. There are about 30 streets in the city named after ponds. The city has waterbodies called Kamala and Bimala which were named after local ruler’s wives. These ponds are even older than the TajMahal.

Around one million people in the city, mostly poor, use its ponds every day. Eighty per cent of them use it for bathing and washing. Many of these water bodies are used for pisciculture. They also store rainwater and help maintain the water level. The wetlands in the east serve as the receptor for the excess water. These water bodies also act as a centre of social and cultural activities.

What actions have been taken to save Kolkata's ponds?

The city planners of Kolkata never bothered about the ponds. So Kolkata’s ponds had never been included in any of the urban water resource planning. KMC does not have any specific department or infrastructure to manage the ponds. Neither does it have an annual programme or budget for pond restoration. It has taken some initiatives to beautify some large ponds but never focussed on restoration. Vasundhara Foundation has played a role in organising and guiding the community movement for protecting and restoring the ponds in Kolkata.

How has Vasundhara done this?

We did a scientific study. It was done in three phases between 2001 and 2007. In the first phase, social- and water-quality surveys of selected ponds were done. In the second phase, we studied the impact of idol immersion on the health of ponds and in the third phase we studied the ecological conditions in and around the ponds.

The study, which was partly funded by the Central Pollution Control Board, found that some of the ponds are being managed very successfully by communities. Lack of technical support from any authority or institution emerged as the major limitation faced by communities. There is also no network for exchange of information. So groups cannot learn from each other’s achievements.

The study developed a water quality standard for the city ponds and identified the need of a financial programme to assist private owners in managing them. We also found that there is also a need for capacity building for the city’s administrative and planning bodies.

How successful have community initiatives been?

One of our best restoration experiences was at Kazipukur where people from different economic backgrounds got involved physically and financially to save a waterbody. The process took two-three years and got completed in 2007. Funds also came from the local member of Parliament. The pond is of medium size (0.5 hectare) and is used by people for washing, cleaning utensils and bathing. Prior to restoration, it was just a receptacle of solid waste.

A community organisation was formed and they started the cleaning process. The members included shopkeepers and residents. They all resolved to stop dumping waste in the pond. The pond was cleaned and several truckloads of plastic and garbage was taken out. Then the water was pumped out and the sludge removed. These are small ponds and get filled up by few days of rain.

Vasundhara helped the community with technical advice. It was ensured that wastewater did not enter the pond and went towards municipal drains. Separate enclosures were made for washing clothes. Grass and other plants were planted near the banks and it was strengthened with soil and wooden logs.

Do you think the present rules are sufficient to protect ponds?

Ponds, by definition, are a type of wetland. But the Wetlands (Management and Conservation) Rules, 2010, does not address the issues of small water bodies like ponds. The rules mention many services of a wetland but do not mention the use of small water bodies. It thus creates legal problems in identifying a wetland or a water body. These problems are more prominent in urban areas because urban water bodies are not considered water resources though they support a large number of people.