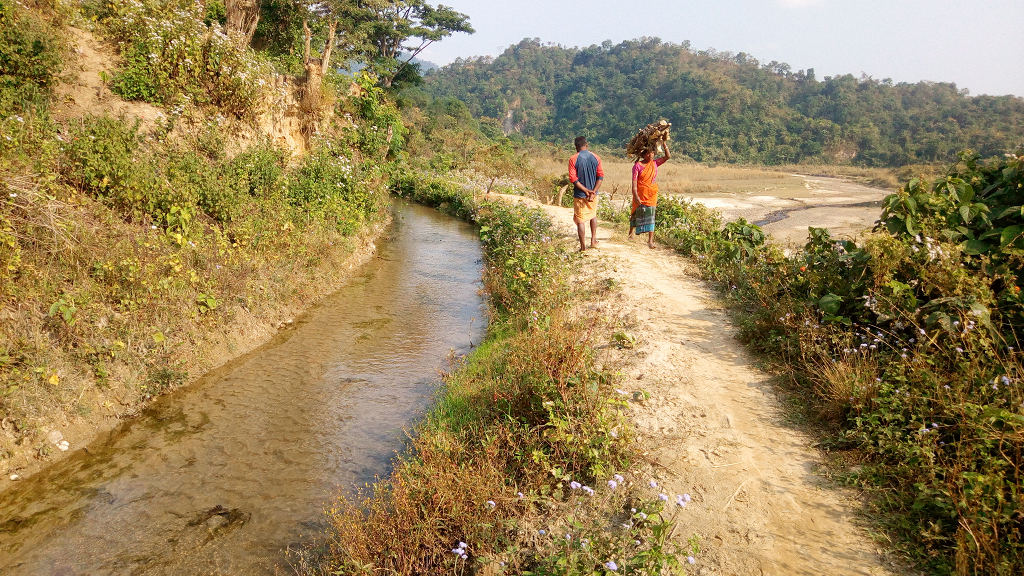 Dong is a decades-old water management system practised by people in rural Assam. Shivangi Agarwal spoke to Saurav Saha, Geography scholar at Guwahati University on how the local community managed to sustain their water supply using this indigenous knowledge in the district of Baksa in Upper Assam. Excerpts:

What is the state of natural water sources in the Baksa district?

Baksa district is located in the foothills of the Himalayas and shares an international boundary with Bhutan. The region has semi-consolidated and unconsolidated rocks. Around 950,000 people reside in the district.

The district is criss-crossed by many rivers and water bodies but about 250,000 villagers in the Bhabar-Terai region of this district do not have enough water for drinking and irrigation. This is due to hydrogeological reasons.

The geology of the region is a heterogeneous mixture of boulders, pebbles and cobbles, with the interstices filled by sand and silt. These sediments are highly permeable with low retentive capacity.

Thus, the streams in this region are devoid of any appreciable surface flow, although, there is evidence of subsurface flow.

How did the local communities get a sustainable source of water?

I have done a round of surveys in 2020, interacting with communities of 14 villages from the Bhabar-Terai region of the Baksa district. In early 1900, the area faced a water supply crisis. Agriculture was under stress and villagers migrated out.

The locals then started using traditional structures to manage water from existing rivers. These structures helped the villagers divert water from the rivers and store them in nearby areas. Thus, this ensured water storage throughout the year.

What are dongs? How are they made and used by the people of this region?

Dong is a decades-old traditional water management system practised by the Bodo community in rural Assam used to channelise river water into villages.

Such structures are popular on the Pagladiya river, flowing along the Indo-Bhutan border of Assam. The water from the river is diverted towards the villages through earthen canals. The diverted water is stored in ponds locally called pukhuri. Sometimes, the water is directly lifted from the earthen canals for irrigation.

The communities have also used indigenous engineering knowledge to maintain the flow in the canals. The mountainous rivers when plunging onto the plains are captured in these canals and at that point convex dams are created so that the flow of water in the canals can be regulated.  The dams are made up of tree branches, stones and boulders.

The dams also help in increasing the water level at the feeder point. This ensures enough water in the canals.

Several sub-canals called shakhas and prakhashas are constructed from the main canal. The network thus created ensures water to every corner of the village. There is a fixed time for the release of water into these sub-canals from the main canal, normally done twice a day by the communities in charge of the canals.

How is the dong system administered?

The administration of the dong system is democratic. The region’s dong committees administer and handle operations and management of the water resources supplied through dongs. The committees, called dong-bandh committees, have existed in the region since the early 1900s.

There are as many as 17 such committees in the area. This area has been experiencing large-scale in-migration from other parts of the state and from then East Pakistan (presently Bangladesh), and as a result, the demand for water for drinking as well as irrigation purposes has increased significantly across the years. Therefore, the villagers formed a central committee Uttar Anchalik General Pagladiya Dong-Bandh Committee way back in 1954 to govern the village-level committees.

Water distribution, canal repair, labour mobilisation from each village, conflict resolution and other activities that fall under the command area of the individual major canal is done by the group committees.

Have the committees come upon any financial structure for operating the dongs?

The funds requirement for operations and maintenance of dongs is met by fees paid by the village communities. They are required to pay Rs 10 per ‘bigha’ of agricultural land per year. For every new connection, a community or a family needs to get themselves registered.

Do these structures ensure water supply for sustainable agriculture?

Paddy is the main crop sown in the region which requires a lot of water for irrigation. The dongs supply enough water for this.

Some people harvest other water-intensive crops like maize, potato, betelnut and others. The region exports betelnut on a large scale.