Sheila Dikshit of the Congress party has been the chief minister of Delhi for three consecutive terms. She is in the fray to win the seat a fourth time. Dikshit tells Ankur Paliwal her plans on sustainable development projects in Delhi. Edited excerpts 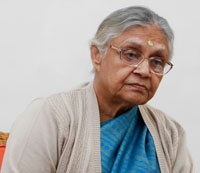 We have given Delhi’s pride, Metro, to its people. It is one of the finest public transport services and caters to 2.5 million passengers every day. In its third phase, Metro will connect many large and small colonies of Delhi. It is because of our initiative that Delhi has the world’s largest fleet of Compressed Natural Gas-propelled buses. Delhi Transport Corporation is running 6,000 buses, 25 per cent of which are air-conditioned. The bus fleet caters to 4 million passengers daily. We are in the process of installing Global Positioning System in the buses and plan to double the number of buses. We have increased the number of autorickshaws from 50,000 to 75,000. We have the world’s second best international airport. A new achievement is the modern Kashmiri Gate inter-state bus terminal. We plan to make public transport even more convenient.

On mobility and dedicated cycle ways

There is no doubt that mobility is a problem in Delhi and we do not have enough dedicated cycle ways. We must make dedicated cycling tracks, but the problem is that people do not use even the existing tracks. At many places, cycling tracks are being used to park cars. Some roads are not wide enough to have cycling tracks. We are working on a two-pronged strategy where we build dedicated cycling tracks and educate people so that they can use them. But we do have safe pedestrian footpaths and a large number of foot over-bridges and subways in place. An associated mobility problem is parking. Many colonies are choked with cars and do not have parking spaces. We are thinking of building parking spaces below parks in residential colonies.

On pollution in Yamuna

The entire Yamuna is not in my jurisdiction. We have been trying our best to prevent Delhi’s polluted water entering Yamuna. We have installed interceptors on the three major drains to stop polluted water from entering the river. A total of 34 sewage treatment plants with a total capacity of 545 million gallons per day (MGD) also minimises the pressure on Yamuna. The Prime Minister’s Office and the apex court are monitoring the Yamuna Action Plan.

We have closed all coal-based power generation projects. Close to 600 industrial units have installed polluted smoke control appliances. We are offering low sulphur diesel for sale. Delhi has six functional real-time air pollution control centres. We will bring Air Action Plan with the objective of meeting ambient air quality standards by 2017. We are working on a plan to stop commercial vehicles of other states from entering Delhi. These vehicles increase traffic congestion and air pollution. We want peripheral roads around Delhi so that commercial vehicles can enter other states without crossing Delhi. The process is taking time because of land acquisition problems but the plan has to come through. We cannot ask people to stop buying cars. It is a sign of good economic growth.

Ensuring clean drinking water to the residents of Delhi has been my biggest priority. The per capita consumption of water in Delhi is highest in the country. The current demand is 1,100 MGD and Delhi Jal Board supplies 835 MGD after treating raw water. We have commissioned four new water recycling plants with a total capacity of 45 MGD. Besides, 53 new underground water reservoirs have been commissioned. We are also providing clean drinking water to slum areas and unauthorised colonies. One big problem is wastage and leakage of water. We are addressing this through campaigns. Old pipelines are being replaced with new ones. We are also trying to rationalise the distribution of water.

Sanitation is another big problem in Delhi that we are addressing. We will construct more toilets in every constituency, 20 of them would be reserved for women only. We have released money to the three municipal corporations to take care of sanitation work in Delhi. But their response has been lukewarm.

Delhi has 39 government hospitals, and 21 of these have been commissioned by our government. These hospitals have 44,000 beds in total. Delhi has become a medical tourism hub. Migration of people in Delhi is definitely adding to the stress on hospitals. But we are catering to them to the best of our ability. We get 36 per cent of our patients from outside Delhi. We never say no to any outside patient. However, they cannot avail services like Arogyashri, which are reserved for residents of Delhi. Delhi’s hospitals are overcrowded because nearby cities like Noida and Gurgaon in the National Capital Region (NCR) have more private hospitals than government hospitals. I have been raising this issue in NCR meetings for these cities to have more government hospitals so that people can avail the facility in their own cities.

Delhi generates more than 9,000 tonnes of waste daily. As the current waste dumping sites in Delhi are overflowing, we are searching for new sites in NCR. Unfortunately, neighbouring states are not cooperating on this. We are also looking for advanced technology from a developed country for proper disposal of waste. We have 16 megawatt (MW) of power being generated at Okhla waste-to-energy project and another 22 MW waste-to-energy project is coming up in Narela.

On rehabilitation of slums

We have not been able to achieve the desired pace of rehabilitation because of multiplicity of authorities. We are ready with 1,500 low cost houses for allotment to slum-dwellers. Government is keen on  situ rehabilitation.