M K Ranjitsinh has been involved in conservation for more than 40 years. Rajat Ghai speaks to him about his latest book, A Life with Wildlife: From Princely India to the Present, and India's conservation challenges 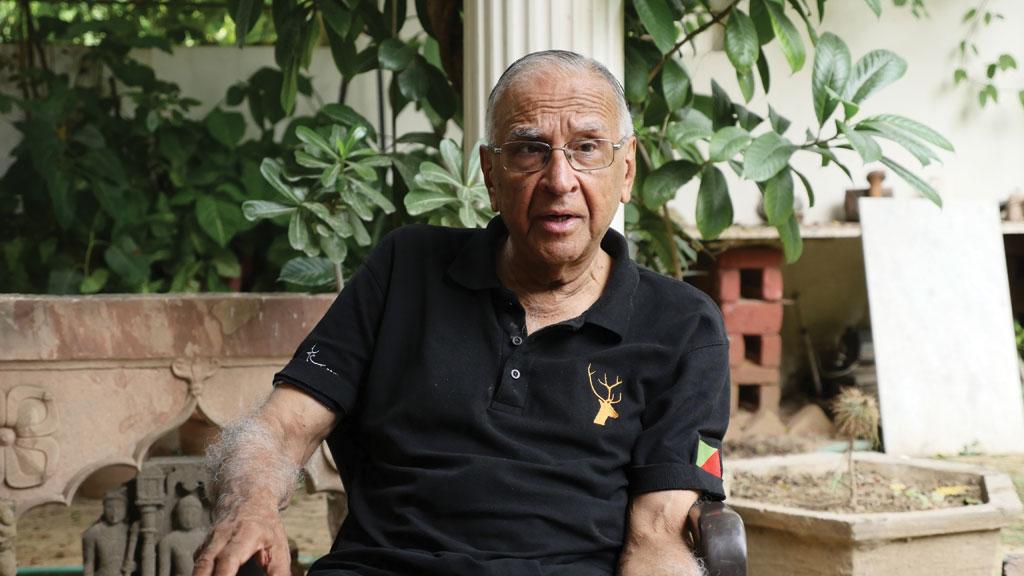 What do you think of captive breeding programmes, especially for critically endangered species like the hangul?

Frankly, I am not in favour of zoos or breeding animals in captivity. At the same time, if an animal is on the brink of extinction, the only option is to go for a captive breeding programme. That’s why I have advocated captive breeding programmes for the hangul and the Great Indian Bustard. The hangul is now confined almost entirely to the Dachigam National Park and its environs. Similarly, the Great Indian Bustard is only found in Jaisalmer. My sources tell me that there were no male bustards this season in Gujarat. In these circumstances, the only option is a captive breeding programme because if there is life, there is hope. If there are two, they can make a multitude.

Can we save the Great Indian Bustard from extinction?

I think we can. In recorded history, we have lost only one large mammal, the Indian cheetah. The cheetah went extinct in the last century because we did not know or had the wherewithal to stop it. Now we know what the situation is (in the context of the bustard) and we have the wherewithal to stop it. If any species goes extinct in India, the onus would lie with the Centre and the state governments.

The Himalayan wildlife is located in a volatile conflict zone. Can they survive?

On the contrary, wildlife in this region is safe because of inaccessibility and difficulty of terrain. The fact that some of them live in zones that are disputed and have troops standing eyeball-to-eyeball on both sides of the boundary also contributes to their safety. Such scenarios are found in other conflict zones as well. For instance, the best place to see Korean wildlife is in the demilitarized zone between the two Koreas. I have also visited the Line of Control in Kashmir. One can see markhor since neither the Indian nor the Pakistani pickets will fire on them as this can start a conflagration. The other good thing that is happening in case of Himalayan wildlife is selective tourism. People are going to see Himalayan wildlife, particularly the charismatic mega species like the snow leopard. And therefore, the locals have a stake in not getting rid of snow leopards. Of course, tourism is a double-edged sword. It can also harm and we have to be careful.

You have lived in three Indias: pre-Independence, post-Independence and post-liberalisation India. Which period was best for conservation?

In pre-Independence India, when the British and the princely states ruled the sub-continent, there were hardly any wildlife laws. At the time, only one family or one hunter could hunt. Because of this selfish motive—preserving wildlife for their hunting pastimes—the princely states protected wildlife and so did the British. Today, public interest is centred around mega species—like the tiger, the rhino in Assam and the elephant in southern states. A visit to a national park should be to have communion with nature. But that does not happen. We go only to see large animals. We go to ogle at them. There is no communion with nature.

Why do you consider the Scheduled Tribes and other Traditional Forest Dwellers (Recognition of Forest Rights) Act of 2006 to be the most harmful action undertaken by any government?

The 2006 Act says that anybody in possession of forest land two months before the Act came into force would be given that land. This gave a fresh impetus to encroachers. So much so that I am given to understand that in Kerala, people were transplanting palms and other trees that they had grown for two years into forest land just six months before the Act came into force. And this stipulation of the Act was not to apply to critical wildlife habitats. Did any government notify those critical habitats? I was a member of that committee and they are still dragging their feet on that. Is that not populism? The 2006 Act was a vote gimmick. Of course, the Congress did not get much out of it. Others did.

Can we resolve the impasse over the translocation of Gujarat's lions?

It is a question of whether you carry out supreme court orders or you stand in contempt of court. Four years ago, the Supreme Court had given clear directions that a roadmap should be prepared in six months. There has been a committee sitting on it all these years. We meet, we go through the process and yet the roadmap is not ready. The government of Gujarat is simply not interested since it does not want to lose its monopoly over the lion.

It is not a question of Gujarat v Madhya Pradesh. It is about a second home for the lions. The government of Gujarat does not want to establish any more protected areas. In fact, few know that the government has reduced the “critical area” around Gir’s periphery from 3 km to 1 km. They have five protected areas. The increase in lion population between 2010 and 2015 was 11 per cent. But it was less than 6 per cent in the protected areas and 23 per cent outside. So the lions are spilling out. There is no space for them. The question is if you want to keep them outside the current protected areas, you will have to establish new protected areas. These lions cannot be brought inside the current protected areas again as the resident lions would kill them. If they cannot allow lions outside Gujarat, they can release them in other areas inside the state like the Barda National Park in Saurashtra. I had asked the Gujarat government in the 1960s to make Barda a second home for the lion. They did not do it.

Where do you see India's wildlife 20 years from now?

That depends on the initiative taken by the government. There are two things here. I see a future for larger animals and birds only in protected areas. There will, of course, be places where migratory birds will survive. There will be other places where other animals will survive mainly because of religious sentiment or inaccessibility like in the Himalayas. But elsewhere, it will be the protected areas which are deemed to be the only havens of hope for the survival of not just wildlife, but of the natural heritage of this country, of both flora and fauna. Elsewhere, I see a more dim future as we are not able to implement a more sustainable management principle in practice.

You need political support and you need to train and support a dedicated cadre of people to carry out conservation, at least in protected areas. The Forest Commission that was established under Justice B N Kripal had given specific recommendations for specialisation within the Indian Forest Service (IFS). It has not been accepted till today. If you specialise and become experts in diverse fields, all within the IFS’ ambit the service will be strengthened.