`Religion is not doing enough to help wildlife'

George Schaller is one of the first scientists to study and rediscover several rare and charismatic species. These include the mountain gorillas in the Congo, lions in Tanzania, tigers in India, jaguars in Brazil and the Asiatic cheetahs in Iran. He has also been researching the wildlife in China, including the giant panda, the Tibetan antelope and the snow leopard. On a recent visit to India, he spoke to Rajat Ghai on emerging conservation issues. Excerpts from the interview 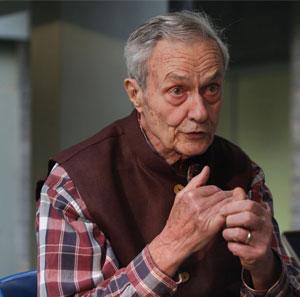 Do you think India has failed in wildlife conservation?

India has not failed. Since Independence, your population has tripled. That means you have to produce more food, which, in turn, means more habitat destruction and more pollution. The only failure is that not enough detailed attention is being paid to the beauty that is left.

Take the case of the Panna Tiger Reserve. They are clearing 200 sq km of forest for a construction project. If you whittle down all your reserves slowly, you will have nothing left. The basic problem in India as elsewhere is that corporations provide the money to get what they want and politicians give the corporations what they want. In democracies, people don’t know enough to elect officials who are genuinely concerned about the future. Destroying habitats to make a few rupees or dollars does not help in the long-term. In fact, we have all failed—universities, governments, departments and the media—in educating officials about the importance of conservation.

India's forests are home to both animals and forest-dwelling communities. It is argued that furthering the interests of one hurts the other. Do we need a different conservation model for India?

Let me explain with an example. A tiger, for instance, needs a nice forest area, which is not full of people so that it can raise cubs in peace and tranquility. It needs corridors so that it can go to another forest patch. You cannot keep a big tiger population boxed into a tiny area. Hence, the planning has to be different for different species. Yes, you have got to balance human livelihoods with wildlife interests. But where will the money come from? Well-managed tourism can bring money. In Rwanda, each tourist pays $500 to watch mountain gorillas for an hour— 80 per cent of that money is given to local communities. Communities will cooperate if the government pays them a fraction of the money earned from tourism.

Do political and economic systems shape a country's conservation trajectory?

For one, the economy today is different. There are many multinational corporations that funnel money into a country to do what they want to, and local politicians play along. In any activity—poaching, mining or oil drilling—money does the talking. The mantra for conservationists is to keep fighting for whatever they think is beautiful and orient the public and international opinion accordingly.

A sustained campaign can succeed. I have been fighting oil drilling firms in northern Alaska. The US public supports us since they do not want the Alaskan wilderness to be destroyed. Another example is the Serengeti National Park in Tanzania. Some years ago, the Tanzanian government decided to build a highway through it. That would have been catastrophic since it would have impeded animal migrations, increased poaching and human encroachments in the area. An international outcry forced the government to backtrack. But nobody knows what will happen in the future. That’s why you need the public behind you.

Is a career in wildlife and environment more dangerous today?

When you step on the toes of people trying to make money, you endanger yourself. For instance, people have been killed in India for trying to stop illegal tiger trade and they have been killed in Brazil too for trying to stop illegal rubber tapping. I work in Afghanistan which is not known to be very peaceful; and, in Vietnam, you have to go out with a guard. So, yes, it is sometimes dangerous. But every country has inspiring individuals who are very concerned about the environment and are trying to do their work in difficult times.

Globally, how much understanding does the public have about field biology?

Every educational institution must have a compulsory course in ecology and wildlife so that the next generation becomes familiar with these topics. The same goes for religious institutions. Religion is not doing enough to help wildlife. Religious leaders claim their texts and scriptures support wildlife conservation. They usually don’t. When I talk to a Shia imam in Iran or a Buddhist lama in Tibet, they know nothing about the ecology. They should be taught as well.

As a field biologist, you have discovered several unknown species. Do you think there still are plenty of animal species out there, waiting to be discovered?

Nobody knows how many species there are. Some say 40 million, some say 50 million, and some say 100 million. The point is that most species remain undiscovered. But most of those are small creatures. As far as large mammals and birds are concerned, we sometimes get new discoveries or scientists re-classify an existing species. If you want to do that and you know your taxonomy, you can go to the bush anywhere and find many new species.

But my findings were basically rediscoveries—people thought the animal was gone extinct and suddenly, I came across it. Ultimately, we know almost nothing about the ecology. We know the behaviour of some species of animals, we know the names of trees, but do we know what effect would our actions have on the ecosystem? If you cut a certain tree in a specific area, what impact will it have on birds that nest on it and the insects that live in it? We don’t know. And we may never know. The only sensible thing we can do is to try to save everything so that it functions as an integrated system because in nature, everything is related.

How do you rate the performance of environmental journalists?

Editors of all media organisations across platforms need to be educated about green issues. For instance, whenever I pick up a major well-respected Indian English daily, it has five pages dedicated to sports, seven pages to economy. To find something on the environment, I have to look hard and be lucky. Every newspaper should reserve one page for the environment.