...is what awaits over 80 million tuberculosis patients worldwide

TENS of millions of tuberculosis (TB) patients worldwide are facing a serious risk to their lives. They may succumb to the disease even before medical science comes up with a better vaccine or more effective antibiotic treatments. Barry Bloom of the Albert Einstein College of Medicine in New York told a gathering of scientists in Chicago that the inherent slowness of TB vaccine trials means that doctors will not have an effective global immunisation against the disease for another 30 to 40 years. By then we could witness another 80 million deaths, he says. 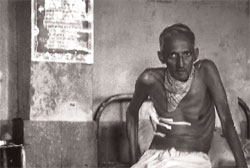 Given this lag, most TB experts agree that there is an urgent need for better treatment. “We’re ready now to look at a new aggressive approach to preventive therapy,” says Richard O’Brian of the Atlanta-based US Center for Disease Control and Prevention. Such therapy is usually given to patients exposed to the TB bacterium — indicated by a positive tuberculin test — and, therefore, stand a good chance of contracting the disease.

The treatment, however, is controversial. Of every 1,000 people testing positive and are not treated, only one develops the disease annually thereafter. Moreover, there exists a formidable risk: dangerous side effects, including severe damages to the liver.

Tom Moulding of the Los Angeles Country Public Health Department told the conference that a report would soon be published revealing that children who died after receiving liver transplants made necessary by their TB treatment were not counted as casualties of the treatment.

One in every 7,000 people on a sixmonth course of the TB drug isoniazid die of liver damage, says Donald Enarson of the International Union Against TB and Lung Diseases in Paris. “When you think that only one in 1,000 get the disease annually, the rate of side effects seems extremely high.” European doctors limit such therapy to only the “high-risk” patients