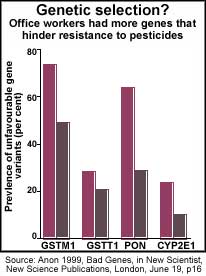 the "healthy worker" effect has been a mystery to scientists. This effect is a paradoxical situation in which people working with hazardous chemicals, or those exposed to radiation at their job, often appear more healthy that the general population. Epidemiologists have suspected that among people employed in jobs involving hazardous chemicals, those who are more adversely affected by exposure to toxic chemicals tend to leave their jobs, while those who are more resilient remain in the workforce. But this could not be proved at the genetic level. Until now, that is.

A recent study involving a small group of Costa Rican banana farmers has thrown some extraordinary clues about jobs that 'select' people with genes that equip them to cope better with the working conditions. And there are already fears that some day in the future, employers might discriminate against people with 'unfavourable' genes. But a passive and subtle form of discrimination is already taking place in some jobs, suggest William Au and his colleagues at the University of Texas Medical Branch in Galveston, usa ( Environmental Health Perspectives , Vol 107, p501).

The researchers were trying to find out if genetic differences between banana farmers have any bearing on how their bodies respond when exposed to pesticides. The researchers compared 20 farmers working on Costa Rican banana plantations since the late 1960s with 20 office workers. They found that the farmers consistently recorded higher frequencies of chromosomal damage, and their white blood cells were less efficient at repairing the dna .

Though the study is too small to show whether this trend is statistically significant, Au believes it should not be undermined: "We have a small population, but the outcome is consistent for every gene." If larger studies confirm the results of Au's study, there may finally be an explanation for what is known as the "healthy worker" effect. William Suk of the National Institute of Environmental Sciences in Research Triangle Park, North Carolina, usa , describes Au's paper as a "tantalising report". "It is quite possible that there is a kind of selection process going on," he says, adding that further data is expected from the institute's environmental genome project. The project started in 1998 and aims to understand how genetic variability affects people's sensitivity to toxic chemicals and other environmental hazards.