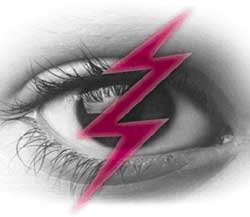 when William Gibson, the then-unknown author of cyber-age science fiction penned Neuromancer in the 1980s he had no way of knowing that many of his ideas, would become reality in this century itself. One of his ideas was to eliminate all visual display units and tv s by projecting images directly on to the retina. It sounded strange then, but now, us researchers have predicted that a similar technique could soon help blind people 'see' again.

The team, headed by Mark Humayun at John Hopkins Hospital in Baltimore, usa , successfully transmitted simple electronic images directly to 15 blind peoples' retinas. They report that all 15 patients have been able to see either spots of light or more complex patterns.

"To see light after so long, it was just wonderful. It was blue," says 71-year-old Harold Churchey, talking about his first visual experience after 15 years of blindness. "It was just like switching a light on." Churchey, who has been suffering from the degenerative eye condition retinitis pigmentosa, is one of the 15 patients to whom Humayun and his colleagues have been able to give some fleeting vision.

"It was great," Churchey said. "They showed me the letter 'Headline'. I had trouble seeing the bottom part of it initially, so I thought it was ' u '. But it was very clear."

Humayun had earlier demonstra-ted that people who lost their sight through diseases affecting their rods and cones -- the retina cells that detect light and colour -- could be made to see spots of light. He did it by bypassing these cells and electrically stimulating bunches of still-healthy nerve cells, the ganglia, behind the retina with single electrodes. However, he was not sure if the brain could make sense of more than one artificial signal at a time and was worried that the spots of light would merge and become one incoherent blob.

Late in 1998, however, he told a neuroprosthetics workshop at the National Institutes of Health that he had discovered that this was not the case. He tested his patients with a matrix of 25 electrodes on their ganglia, and although this gave poor resolution, it was enough for them to recognise simple computer-generated images of numbers, letters or basic shapes. "Some of these patients have not seen for as long as 40 years," says Humayun. "It takes a while for them to see the letters, but once they pick up even a single dot they make quick progress from then on."

Humayun now plans to develop a permanent device with a high enough resolution to restore basic vision. An external video camera contained within a visor will send television images to a chip embedded in the retina. This will then translate the video signals into minute electrical signals on contact that will stimulate the ganglia ( New Scientist , Vol 160, No 2159).

The team hopes to improve resolution and image quality so that patients can differentiate, for instance, between a window and a door.