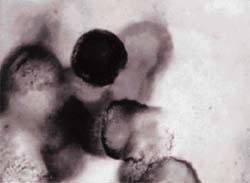 scientists at the Birbal Sahni Institute of Palaeobotany ( bsip ), Lucknow, have discovered a 3.2 billion-year-old fossil of blue-green algae in Singhbhum, north Orissa. They say that this could be the oldest life form in Indian geological history.

The search for the oldest biological remains began in 1992. The scientists had submitted a proposal to the department of science and technology ( dst ), in 1992 to conduct a search for the oldest lifeform in the country. A year later, the dst approved the project. Says Principal investigator P K Maithy of bsip : "We had originally planned to work in Sharwar, Karnataka, but were asked to conduct the study in Singhbhum, Orissa, a place rich in iron ore dating 3.4 to 2.8 billion years." The investigating team comprised Maithy, S Kumar of the department of geology, University of Lucknow, and R Babu of bsip .

The scientists made five field trips to collect scientific information from the Kaisa and Barbil iron ore formation in Singhbhum. There they noticed cherts, a hard, dense rock formed of amorphous silica, which are best suited for fossilisation. But location of the actual site was a problem as the area extended to over 500 sq km. "It is only while driving through the agricultural fields in Borvil that we saw iron ore deposits and also cherts. There we found the fossils spread over 200 metres and a depth of two metres," says Maithy. Further investigation revealed that the biological remains belonged to the blue-green algae.

The scientists believe that the findings will help in understanding the evolutionary trends and biotic implication of the microbial community in relation to environment and mineral deposition during and the earlier part of the Proterozoic era.