Rare insects in the US now qualify for legal protection 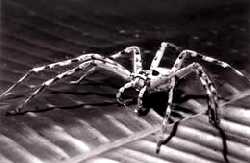 poaching of spiders, reptiles and other rare insects has spurted into national parks of the southwestern us , as these species attract high value in the overseas markets. traffic , a division of the World Wide Fund for Nature ( wwf ) that tracks the impact of poaching around the world, estimates that trade of exotic species fetches around us $20 billion every year, a figure second only to the illegal drug trade ( Environment , Vol 39, No 2).

Data compiled by 'Operation Rockcut', an investigation sponsored by the National Park Service ( nps ) reveals that till 1995, nearly 30 suspects in eight states of the us were arrested for indulging in such illegal operations. However, it is said that nps' s efforts have only scratched the surface of a much larger problem. While investigations like Operation Rockcut, have proven marginally successful, contradictory and ambiguous state and federal poaching laws have complicated the conviction process. Poachers are assessed fines that amount to a fraction of the price that exotic species fetch in the black market.

As a result of poaching activities, eight species of rattlesnakes now qualify for legal protection, drawing additional attention to this rising problem. Poachers have also targeted another native us species -- the freshwater mussel. The mussel's shell is made of virtually the same dense material found in natural pearls, a mixture of calcium carbonate and nacre protein.

The attempts to enforce state-regulated protection zones have been largely frustrated by inconsistencies in the state regulations. Clearly, more specific regulations and strict enforcement will be needed to resolve the mounting problems.