‘SDGs need to be reworked to tackle hunger, poverty’ 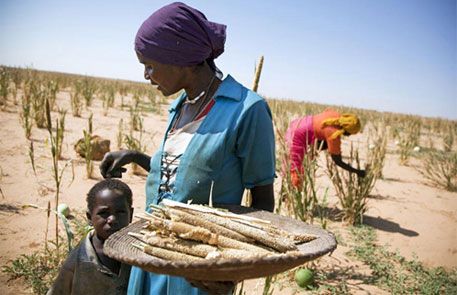 As the world readies to usher in the sustainable development goals (SDGs) later this year, doubts have been raised whether the targets under the development agenda would be achieved. A scientific critique of the SDGs, which will replace the millennium development goals expiring this year, states that countries will struggle with the agenda without clearer, more quantifiable targets.  The report critiquing the SDGs was released by the International Council for Science and the International Social Science Council ahead of the four-day UN meeting on SDGs, which is currently on in New York.

The report has rigorously analysed the 169 targets intended to operationalise the 17 goals that will be approved by governments later this year. It provides a unique tool that nations can refer to for reviewing and adopting the goals and targets at the national level.

How SDGs compare with MDGs
SDGs are widely regarded as the most tangible result of the 2012 UN Rio+20 conference on sustainable development. The Open Working Group (OWG) on SDGs has proposed a set of 17 goals and 169 targets. These goals and targets are the basis for the formal negotiations that would result in the adoption of the SDGs by the UN General Assembly in September 2015.

Overall, SDGs offer a “major improvement” over MDGs as these have been formulated with a greater understanding of the relationships between social, economic and environmental dimensions, says the report. See table below on why the review favours SDGS over MDGs.

The challenges
The sustainable targets suffer because they have not been integrated and rely too much on vague, qualitative language rather than hard, measurable, time-bound, quantitative targets, says the report.

Of 169 targets under the 17 draft goals, just 29 per cent are well defined and based on the latest scientific evidence, while 54 per cent need more work and 17 per cent are weak or non-essential.

The goals address challenges such as climate, food security and health in isolation from one another. Without interlinking these there is a danger of conflict between different goals, most notably trade-offs between overcoming poverty and moving towards sustainability. Action to meet one target could have unintended consequences on others if they are pursued separately. Hence, the report calls for tackling targets in an integrated way.

Emerging infections neglected
While connecting the dots between various goals and targets, the report also expresses disappointment over goal for a healthy world and says that the target which focuses on HIV/AIDS, tuberculosis, malaria, hepatitis and water-borne diseases “sounds like a catch-all for infectious disease”, but neglects emerging infections such as Ebola and new strains of the flu.

The report also points to several targets not being quantified. Data availability and strengthening the knowledge infrastructure is critical for effective monitoring of the sustainable development goals, the report says.

The researchers have proposed minimum levels of ambition to facilitate accountability.

While recommending an ambitious framework for monitoring and review of implementation, the report highlights the challenge posed by lack of qualitative data and, therefore, the capacity to measure targets. The report advocates for new ways of obtaining data through participatory and transparent systems such as those proposed by The World We Want 2015.

The report thus reminds global institutions that transparency and open data is an integral component of the post-2015 development agenda. It must be considered as a reminder for regular and sustainable institutional systems, essential for data collection, management and monitoring. Donor institutions, philanthropists and government institutions, therefore, have an important role to ensure successful monitoring of SDGs and must invest in strengthening knowledge infrastructure, especially in the global South.

It is imperative that the report be brought to the notice of the Independent Expert Advisory Group on Data Revolution for Sustainable Development, established and announced by United Nations Secretary-General Ban Ki-moon on 29 Aug, 2014

Another paper published in December 2014 too stated that the SDGs to be adopted by the UN General Assembly in September 2015 risk falling short of expectations. Raising doubts on the ability of national governments, the paper suggested active involvement and engagement of the businesses, cities and the civil society.

As the governments come together to negotiate the global declaration 2030 for a sustainable world to draw a big picture vision of the SDGs framework, this review reminds them of few major global agreements critical for success of this framework.

It says that success of the SDGs would be partly dependent on aligning targets and goals with key international agreements and political processes. 2015 will witness a few such important global agreements and will be critical to ensure that international development targets set for 2030 get the right direction.

Global agreements expected this year, which need to be aligned with SDGs, are:

Meta-goal: high quality life for all

The scientific review says that the “ultimate end” of SDGs in combination is not clear. It, therefore, strongly calls for defining and drawing up a Meta-Sustainable Development Goal – a prosperous, high quality of life that is equitably shared and sustained.

With the draft report being presented by the UN Secretary-General Ban ki-Moon on December 4, 2014, the inter-governmental negotiation processes on the SDGs had entered the final round.

On Jan 15, 2015 over 1,000 civil society organisations in over 120 countries launched a global campaign –to mobilize world leaders to commit to delivering ambitious sustainable development goals in the post-2015 era and to take action in tackling climate change.

And now, this rigorous review of SDGs by the scientific community with a “loud and clear message” for a “meta-goal” towards a sustainable world should prompt action in the most significant UN meeting on SDGs scheduled to end on February 20.

The Road to Dignity by 2030: Ending Poverty, Transforming All Lives and Protecting the Plane (Synthesis Report of the Secretary-General On the Post-2015 Agenda)

On target for people and planet: setting and achieving water-related sustainable development goals