101 suicides in two months; is Marathwada the new Vidarbha?

As many as 101 farmers have committed suicide in the Marathwada region of Maharashtra since the devastating hailstorms in March this year. This sudden spurt of suicides has raised concerns as to whether this arid region is heading for an agrarian crisis similar to that of Vidarbha.

A whopping 71 suicides have been reported in the month of March 2014, close on the heels of the unseasonal rains and hailstorms, which battered the region from February 22 to March 12, destroying standing crops and vulnerable orchard crops like banana and papaya. April saw 30 more suicides. Of these, 28 suicides—more than one-fourth—have happened in Beed district alone.

Marathwada region is not generally in the limelight for farmer suicides, but for the past few years, a steady trickle of suicides have been happening. In January and February this year, 15 and 18 suicides were reported respectively each month from the region, taking the toll since the beginning of the year up to 134. The spurt of suicides in the last two months have served as a rude awakening to the possibility of a colossal crisis building up. 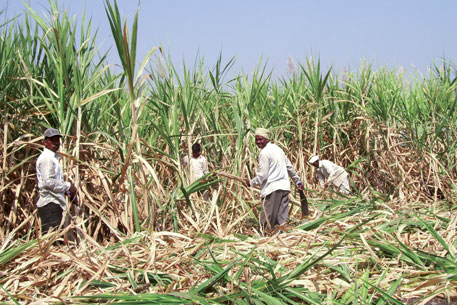 While suicide numbers are highest among cotton farmers in Vidarbha, in Marathwada, say observers, the major chunk of suicides have happened among orchard farmers. Gajanan Khatu, senior socialist leader and researcher on farming issues, says, “The reasons for suicides in Marathwada appear different from that of Vidarbha on the surface, because of the difference in the crop profiles, but the root cause is the same—like cotton, orchard farming is capital intensive. Both the costs of starting an orchard and maintaining it are very high.” In addition, there is a long waiting period involved before the endeavour starts. Farmers often acquire huge loans to start orchards, that take years to pay off. If there are losses along the way, small and medium farmers find themselves subject to dual pressures – on the one had there is the pressure to pay the loan installment, and on the other, there is concern over the cost of maintaining the orchard till such time as the losses are made good,” he adds.

The Marathwada region, which is arid and not suitable for water intensive orchard and perennial crops like sugarcane, banana, grapes and papaya, has witnessed an indiscriminate spread of these crops because of faulty agriculture policy.

In Beed district, where the highest number of suicides have been reported, pomegranate orchards have come up in a big way in recent times, says Eknath Awad of the non-profit, Centre for Human Rights, which works with farmer suicides. “The government has propagated pomegranate cultivation in the district on the premise that hilly tracts are suitable for the purpose, but what has been overlooked is that 90 per cent farmers in Beed are marginal, and migration is very high, indicating high poverty levels,” says he. “Pomegranate orchards require huge investment – the yearly maintenance cost alone is more than Rs 1 lakh per acre, which the bulk of farmers here are in no position to sustain.” He says that the huge damage to this crop during the hailstorms has triggered suicides among debt-trapped farmers.

Experts say there is an urgent need to return to the traditional rainfed cropping pattern in the region to reduce farmer distress. Vijay Diwan of the Aurangabad-based non-profit, Nisarga Mitra Mandal, which is studying change in crop patterns in the region, says, “We find that farmer economies are much more stable in traditional crop pattern of a combination of millets, legumes and oilseeds. In recent years farmers have turned to orchards and perennials in a big way because these traditional crops are not fetching a suitable price in the market.” He adds that because of government neglect, traditional and resilient crop varieties like the drought-resistant and short-term yellow shorgum (pivli jowar) are disappearing fast.

Jagdish Prasad, senior scientist at the Nagpur-based National Bureau of Soil Survey and Land Use Planning, says orchard crops, which require irrigation, are not suited for the arid regions of Maharashtra, including Marathwada, as the soils are sub-optimum, and irrigation blocks the pores in the soil and makes the soil sodic. “Theoretically, measures like drip irrigation ought to tackle the sodicity problem, but the system will not be sustainable. Orchard crops like grapes and pomegranate are being pushed in these areas purely out of economic concerns, and sooner or later disasters are bound to happen.”

He says millets, pulses and oilseeds, combined with fodder, is the best agricultural option for these regions.