The recent outbreak of disease has claimed about 500 lives; medics continue efforts to combat misconceptions and mistrust around the disease 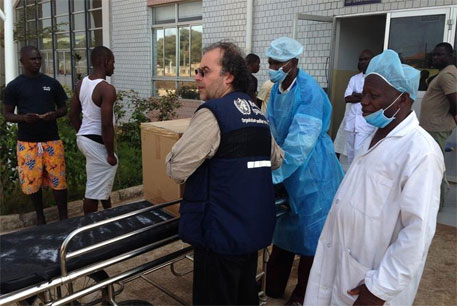 In what is being seen as reiteration of commitment by countries in Africa to battle the world’s deadliest ever outbreak of Ebola, leaders of 15-member Economic Community of West African States (ECOWAS) has decided to set up a "Solidarity Fund" to fight the disease. According to World Health Organization (WHO), the recent outbreak, that began in February this year, has claimed about 500 lives in three countries—Liberia, Sierra Leone and Guinea.

The disease was first discovered in 1976 in Sudan and the Democratic Republic of Congo. It is its first outbreak in western part of the continent.

Earlier this month, a group of 11 African nations had joined hands with international agencies and promised better collaboration to set up better coordination efforts to fight the outbreak which is unprecedented both in scale and duration. As a part of the strategy, the World Health Organization (WHO) set up a regional centre in Guinea this month to respond to the outbreak.

"The Authority directs the Commission (of ECOWAS), in liaison with the West African Health Organization (WAHO), to adopt a regional approach towards containing and managing the Ebola outbreak," the bloc said in a final communication at the one-day summit in Ghana’s Accara on Thursday. Nigeria also disbursed a sum of US $3.5 million for Guinea, Liberia, Sierra Leone, WAHO and ECOWAS pool fund for Ebola.

According to the United Nations, the total number of Ebola cases currently is 888, including 539 deaths, in the three countries. WHO has said that while the epidemic trend remains in Liberia and Sierra Leone, just one confirmed new case had been reported during the past week in Guinea.“Ebola continues to spread in Sierra Leone, Liberia and to a lesser extent in Guinea, with a combined 44 new cases and 21 deaths between July 6 and July 8,” WHO said on Friday.

Medics fight misconceptions and mistrust
Experts and agencies like WHO believe that superstition and tradition have often thwarted containment, awareness and treatment measures during such outbreaks. Practices likepeople touching the body of a deceased relative before the funeraland not disclosing the symptoms of disease or shun the treatment due to fear of social stigma are aggravating the disease control efforts.

In a measure to combat fears and misconceptions, the United Nations Children's Fund (UNICEF) and its partner agencies have expanded their activities across the region.Mobile messaging and ongoing TV, radio and print mass traditional and non-traditional communication campaigns are being used aggressively."Rumours and denial are fueling the spread of Ebola and putting even more lives at risk," said Manuel Fontaine, UNICEF Regional Director for West and Central Africa, according to a report published in allafrica.com .