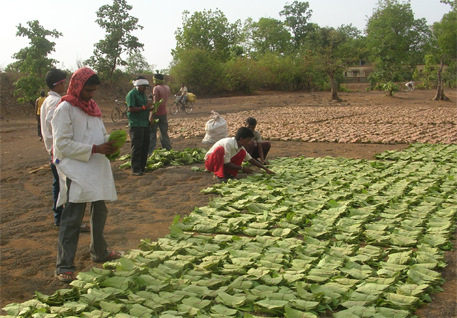 After a wait of two years, tendu harvest and sale rights in Maharashtra are finally being transferred to gram sabhas under the Forest Rights Act. This year, 18 gram sabhas—12 in Gadchiroli district, five in Gondia and two in Amravati district—have begun collecting tendu leaves under the new system. The tendu units in which the FRA forests of these villages fall had earlier been withdrawn from the state forest department's tendu units' auction process.

Dilip Gode of Vidarbha Nature Conservation Society (VNCS), one of the organisations that is aiding gram sabhas' work, said that the gram sabhas had floated their own tenders, but tendu contractors, who had earlier stiffly opposed tendu contracts going to the gram sabhas, did not put in any bid. Following this, the gram sabhas approached the Maharashtra State Tribal Development Corporation Limited (MSTDCL) with a request to buy the estimated 3,000 standard bags of leaves expected to be produced collectively by these villages.

MSTDCL has agreed to pay a price of Rs 3,500 per bag, which is substantially higher than about Rs 2,500 that the tribals were getting under the contract system.

A circular dated May 16, issued by the MSTDCL, says that at total of Rs 53 lakh will be deposited in the accounts of the 18 gram sabhas as advance for tendu collection-related expenses. Regional managers of MSTDCL have also been instructed to provide gram sabhas with godown facilities close to the villages for storage of leaves.

Purnima Upadhyaya of non-profit Khoj, based in Melghat, Amravati, which is helping with tendu collection process for villages in Amravati, says that the MSTDCL prices are much better than the prices being paid by contractors, and since the gram sabhas will reserve some of the funds for village development, the community will be benefited in the long run. She also said that a transparent, government-run system of procurement will be better than leaving the gram sabhas at the mercy of the market.
How long can MSTDCL sustain gram sabhas?
Veteran forest rights activist Mohan Hirabai Hiralal pointed out that earlier monopoly over minor forest produce procurement schemes by the MSTDCL in the state have been miserable failures. “The MSTDCL has no experience of tendu-leaf purchase and despite several suggestions to the effect by experts, the department has not evolved a holistic business strategy on tendu.” He added that the current MSTDCL initiative is being undertaken on an ad-hoc basis to prevent losses to the gram sabhas, but in the absence of business accumen on the part of the government body, the process is not likely to be sustaible in the long run.

MSTDCL director S Sarkunde could not be reached for comments.