The two most notable environment-related events in India this year have been severe drought and severe flooding in many states, with Uttarakhand having been the biggest spectacle. Such high-impact climate extreme events have been witnessed globally on an unprecedented scale in the decade 2001-2010. This has been the warmest decade so far since the initiation of modern measurements in 1850. These observations have been made by World Meteorological Organization  (WMO) in a recently released report titled ‘The global climate 2001-2010, a decade of climate extremes’.

The 100-page report compiled and analysed data on global and regional temperatures and precipitation collected from multiple agencies. It incorporated findings from 139 National Meteorological and Hydrological Services, apart from socio-economic data and analysis from several UN agencies and partners. It also analysed extreme events like the heat waves of Europe and Russia, tropical cyclone Nargis in Myanmar, droughts in the Amazon basin and floods in Pakistan.

Floods were the most frequently experienced extreme events over the course of the decade. India was particularly affected in 2005, Eastern Europe in 2001 and 2005, Africa in 2008, Asia and especially Pakistan in 2010, and Australia in 2010.

Droughts affect more people than any other kind of natural hazard owing to their large scale and long-lasting nature. The decade 2001–2010 saw droughts occur in all parts of the world. Some of the highest impact and long-term droughts struck Australia (2002 and other years), East Africa (2004 and 2005, resulting in widespread loss of life) and the Amazon Basin (2010) with negative environmental impacts.

According to the US National Oceanic and Atmospheric Administration (UNOAA), 2001-2010 was the most active decade since 1855 in terms of tropical cyclone activity in the North Atlantic Basin. An average of 15 named storms per year was recorded, well above the long-term average of 12. 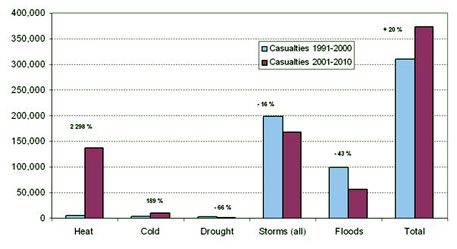 Explaining the decadal analysis, WMO secretary general Michel Jarraud said that in natural climate variations some years are cooler while others are hotter, making a case for a longer time period to develop a comprehensive understanding of changing climate. "On an annual basis, the global temperature curve is not a smooth one. On a long-term basis the underlying trend is clearly in an upward direction, more so in recent times,” said Jarraud.

The decade was warmest for both hemispheres and for both land and ocean surface temperatures. Arctic sea ice declined rapidly, and there was loss of mass from the Greenland and Antarctic ice sheets and the world's glaciers. The global mean sea level rose about 3 mm per year, compared to an average of 1.6 mm rise per year for the 20th century. The average land and ocean-surface temperature for the decade 2001-2010 was estimated to be 14.47°C, which is 0.47°C above the 1961–1990 global average and +0.21°C above the 1991–2000 global average. Every year of the decade except 2008 was among the 10 warmest years on record. Nearly 94 per cent of reporting countries had their warmest decade in 2001-2010 and no country reported a nationwide average decadal temperature anomaly cooler than the long term average.

With regard to greenhouse gases, global average concentrations of carbon dioxide in the atmosphere rose to 389 parts per million in 2010, methane to 1,808 parts per billion and nitrous oxide to 323.2 parts per billion. Since the start of industrial era in 1750, this is an increase of 39 per cent, 158 per cent and 20 per cent respectively.