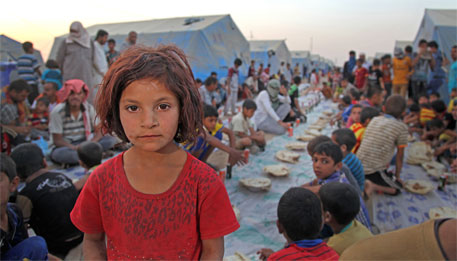 Scenes of inconsolable families and traumatised children in Peshawar have once again highlighted the need to evaluate the condition of children exposed to conflict or living in conflict-ridden areas.

In a press statement issued last week, UNICEF had declared 2014 a devastating year for children. It said that an estimated 230 million children currently live in countries and areas affected by armed conflicts. As many as 15 million children are exposed to violent conflicts in the Central African Republic, Iraq, South Sudan, the State of Palestine, Syria and Ukraine.

“Children have been killed while studying in the classroom and while sleeping in their beds; they have been orphaned, kidnapped, tortured, recruited, raped and even sold as slaves. Never in recent memory have so many children been subjected to such unspeakable brutality,” said Anthony Lake, UNICEF executive director, in the press statement.

UNICEF added that prolonged crises in countries like Afghanistan, Nigeria, Pakistan, Somalia, Sudan and Yemen, continue to kill, injure and displace children. While an estimated 2.8 million children are out of school in Sudan, a country affected by war, drought and extreme poverty, many of the three million children displaced by the ongoing crisis in Syria have been unable to return to school.

The UN agency also released its annual report, State of the World’s Children 2015,  in November. It assesses latest available statistics related to child survival, development and protection in countries of the world. This year, the report evaluated the condition of children based on their economic situation, keeping in view the large income inequalities in different parts of the world.

The report analyses other factors that adversely affect the environment required for children to grow in. Climate change and extreme weather events like floods and droughts lead to large scale displacement of people. Epidemics and conflicts affect children across borders. Children of migrants who work in countries other than their own are unable to access nutrition and education due to curbs on migration and remittances.