24 captive elephants died in Kerala in 2014; most of them were tortured

Rules for ethical handling of captive elephants are rarely followed, says submission to prime minister by the secretary of Heritage Animal Task Force 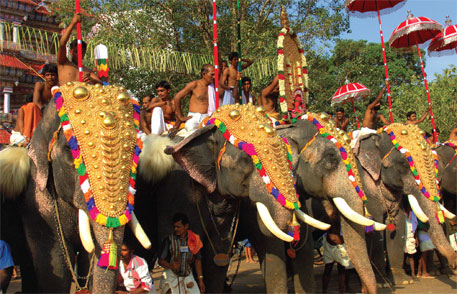 This shocking information about elephants deaths has been revealed in a submission to the prime minister by V K Venkitachalam, secretary of Heritage Animal Task Force, a group that has been closely watching and documenting  all elephant-related developments in the state. During this period, captive elephants have killed six humans and wild elephants have killed eight humans.

Elephant is an endangered species included in Schedule 1 of the Wildlife Protection Act of 1972. The animals included in Schedule 1 need high level of protection. The Schedule provides for the certificate of ownership and makes it mandatory for the elephant owners to provide adequate facilities for the housing, maintenance and upkeep of captive elephants. The Wildlife Protection Act, the Kerala Captive Elephants Rules of 2003 and the amendments to the rules in 2012 prohibit unskilled mahouts from handling captive elephants, making them walk on tarred roads between 11 am and 3 pm and transporting them in trucks for more than five hours without a break to ensure the welfare of captive elephants.

"These rules are rarely followed, especially during festival season," points out Venkitachalam. During festival season—from October to May—contractors take elephants from their owners on rent. The rent amount goes up to Rs 1 lakh for a season. To harvest maximum profit, the contractors parade captive elephants in as many temples and other religious places as possible. Elephants are deprived of sufficient food and water. They are not even allowed to have enough sleep. What’s more, they are forced to walk under the scorching sun for kilometres or are transported in trucks to faraway places. Unskilled mahouts beat them with sticks and iron rods to make them obedient. Despite deep, infectious tethering wounds on the hind legs, they are made to stand for hours during festivals, amid loud noise of fireworks and percussion. Incidents of captive elephants turning violent during the festival season are on the rise, says Venkitachalam.

Many politicians in the state have elephants under their possession in the neighbouring state, he alleges. He also points out that Kerala government has released a data book with details of the captive elephants, which is again illegal. "Strictly going by the rules, only specified registers on food, maintenance, treatment, vaccination and work given to the captive elephants can be kept," points out Vankitachalam.

As for the wild elephants, they are increasingly face cruelties from the mafia which are engaged in timber smuggling, ganja cultivation and illicit liquor brewing.

During 2014, 8 persons were found dead inside Kerala Forest Areas due to attacks from wild Animals, including elephants. All these incidents are the results of lack of proper facilities for managing the man-elephant conflict inside forest areas and gross violations of laws that have been enacted by the Kerala Forest Department.

“We expect that your authoritative office will initiate urgent high-level inquiry in to these types of wildlife crimes which result in death of precious elephants and human being, including mahouts and tourists,” says the submission made to the prime minister.

On October 27 this year, at Kadakkal in Idukki district, a female elephant in the keep of a private individual killed a lady tourist when tourists were riding the elephant. At that place, several captive elephants were misused by elephant contractors for elephant safari. "This type of misuse of elephants for tourism is violation of  the  Wildlife Protection Act. The forest department remains mute spectators of this type of violation of the  laws," says Venkitachalam.  All these elephants misused for tourism have no valid ownership certificate which is mandatory for possessing any elephant by individuals, temples and other religious institutes, adds he.

Answering the questions of a member of the Legislative Assembly, the state forest minister informed the house that 8,006.48  kgs of tusk are kept in various strong rooms of the forest department. This is despite an order issued by  the Ministry of Environment, Forests and Climate Change three years ago to destroy the stock by putting it on fire.

Judgement of the Supreme Court of India regarding regarding Jallikattu, Bullock-cart races in the state of Tamil Nadu & Maharashtra, 07/05/2014