24 Chhattisgarh villages pledge to develop wildlife sanctuary on their own 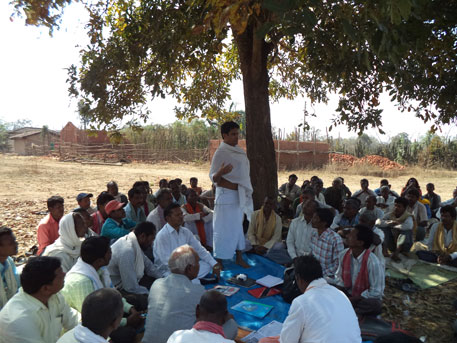 Community leaders of six panchayats in Chhattisgarh, comprising 24 villages, have decided not to give up their land for the proposed Udanti and Sita Nadi wildlife sanctuary.

Over 200 persons from these villages held a meeting on Wednesday at Banjari Behra village on the outskirts of the proposed sanctuary where they pledged to take charge of forest management in order to increase forest cover as well as wildlife numbers by 150 per cent within five years.

Udanti and Sita Nadi Wildlife Sanctuary is proposed to be the largest among proposed eight new forest areas under Project Tiger launched in 2008. An allocation of Rs 32.00 crore had been proposed for tiger conservation in new reserve areas during the XIth Five Year Plan period. The proposed Area for Udanti and Sita Nadi Wildlife Sanctuary in Chattisgarh is 1,580 sq km. This would mean eviction of about 15,000 people living in the 24 villages in Gariyabad district, 250 km away from the state capital of Chhattisgarh.

Tikam Nagwans, 45, a community leader, who was instrumental in getting the village leaders together to take the pledge, sees a conspiracy in the proposed takeover of land. There is speculation that the government wants to evict local people to hand over the sanctuary land for diamond mining and other mining activities.

“The area is very rich of priceless minerals like diamonds. Diamond companies like De Beers has been trying to usurp our land for diamond mining. We see the proposed eviction of 24 villages as a ploy of the state government. First they control it in name of forest and thereafter it would hand over the land to the corporate bodies,” said Nagwans.

“At the meeting, we decided to form a joint committee of affected villages and pledge to assume charge of forest affairs from forest department and offering state government an increase in forest and wild life cover by 150 per cent in the next within five years on condition that the forest department withdraws from the area,” he added.

The pledge would be taken to respective gram sabha for ratification and post deliberation by February 28. Thereafter, the final proposal will be handed over to district collector and forwarded to the governor of Chhattisgarh and the president of India.

“I see this development as an attempt of correcting historic injustice since 1860 when the tribal rights over forest and wildlife was snatched away. This would give another impetus to demand of ‘pristine zone Bill’ echoed by tribal activists,” said B K Manish, a Chhattisgarh-based activist, who participated in the meeting. The Bill was drafted by tribal activists to seek handing over of natural resources to tribals for its complete management.