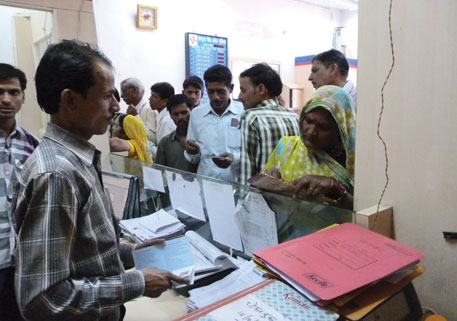 Ever since Prime Minister Narendra Modi’s ambitious financial inclusion programme—the Pradhan Mantri Jan Dhan Yojana (PMGDY)—was launched on August 28 this year there have been misgivings over the haste shown by the government to open banks accounts to cover all rural households. Now a statement of a senior government official in the finance ministry shows the pitfalls of rolling out schemes without adequate infrastructure or systems in place.

G S Sandhu, secretary for financial services in the ministry of finance, has admitted that a fourth of the accounts opened under the much-hyped Pradhan Mantri Jan Dhan Yojana (PMJDY) are by those people who already hold accounts.

Sandhu was speaking at an event organised in Delhi by a Gurgaon-based consultancy services, Skoch, on Thursday.

Sandhu said over 40 million accounts have been opened since the launch of the programme last month and that nearly Rs 3,700 crore had been deposited in these accounts.

“Our preliminary estimation shows that around 25 per cent of accounts are repeat or multiple accounts opened by people already holding accounts in different banks,” said Sandhu. Under PMJDY, the government has promised Rs 5,000 overdraft facility and Rs 100,000 insurance cover to each account holder, which proved to be a big crowd puller on the day the programme was launched on August 28.

Down To Earth has already reported how the launch of the scheme was marred by people submitting more than one form to open double or multiple accounts.  An earlier report in the magazine had reported in detail about the difficulties in opening of accounts under FIP. The article had reported how bank account numbers were not generated for over three months after applicants submitted duly filled up forms and details.

“It is not compulsory but people are depositing money into their new accounts. On an average, every person deposits around Rs 900 in each newly opened account,” said Sandhu.

Sandhu, however, dodged queries regarding recent RBI directives to banks to go slow on mass opening of accounts. He also did not answer questions about who would foot the bill for paying premiums for the accident cover and life insurance and Rs 5,000 overdraft facility promised to each new account holder.

Sandhu was also silent on payments given to banking correspondents who connect the account holders with the formal banking system. The banking correspondent model has been adopted by banks in unbanked areas where brick and mortar branches cannot be opened to reach the people.

He also informed that last week the prime minister has reviewed the success of the scheme.

Sandhu also said that new government is committed of revival of cash transfer, especially transferring of cash subsidy of kerosene and LPG.

“In principle, the government is ready to continue the initiative started by previous government. We are in talks with oil companies and working out the mechanism of transferring subsidy directly to beneficiary accounts given the success of PMJDY,” said Sandhu.

This is a shift in stance because when the Bhartiya Janata Party (BJP) was in the Opposition a few months back, it was against the cash transfer of kerosene and LPG subsidies.

Accelerating poverty reduction in a less poor world: the roles of growth and inequality

Report of the expert group to review the methodology for measurement of poverty (C. Rangarajan Committee Report)