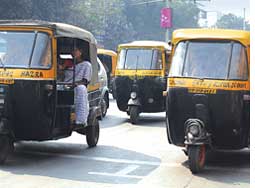 A COURT directive to stop polluting two stroke autorickshaws from plying on Kolkata roads has been rendered ineffective by the state government.

The Calcutta High Court order dated July 18, 2008, to ban two-stroke autos by December 2008 was based on a notification issued by the state environment department. The state government however backed out when auto drivers took to the streets in the first week of January and held violent protests.

The court in its order had also asked the government to ensure that only four-stroke autos running on liquefied petroleum gas (lpg), a cleaner fuel, should be allowed to ply. About 68,000 two-stroke autos, including 30,000 unregistered autos, ply in Kolkata. Most of them use adulterated fuel, dubbed katatel, which is a mixture of petrol, kerosene and naphtha. This contributes to the city's air pollution. The court ban was to put a check on this without delay.

A week before the deadline, the state government approached the court seeking more time to implement the court order. The court rejected the plea. It also rejected a similar plea by auto unions. Three days later, the monitoring committee appointed to oversee the implementation of the high court order decided to repeal fitness certificates of all two-stroke autorickshaws from January 1. The public vehicles department was asked to issue an order in this regard and the police were asked to confiscate two-stroke autos seen plying on the city road. But on December 31, the transport minister announced that about 14,000 two-stroke auto operators have applied for four-stroke autos and that they should be given time.

Subhas Dutta, a Kolkata-based environment activist, said there should have been coordination between the environment department that formulated the notification and the transport department for phasing in four stroke autos and ensuring clean fuel availability.