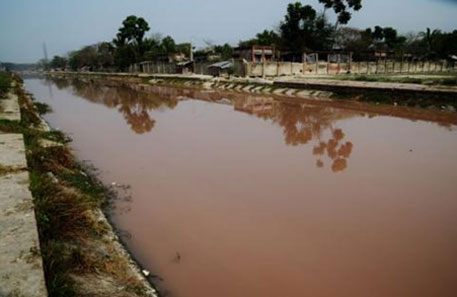 In the early hours of Saturday morning, residents around a nullah near Vadol village near Ulhasnagar city in Maharashtra experienced a rude reminder the Bhopal gas tragedy. More than 300 people fell sick after a tanker discharged effluents from an unidentified industry into a nullah near the village that comes under Ambernath area of Maharashtra Industrial Development Corporation. Residents complained of uneasiness, vomiting, fainting, breathing difficulties and headache. In panic, many people evacuated from the area. The seriously affected were admitted to Ulhasnagar’s Central Hospital.  The patients are now out of danger, said Ratna Raokhande, deputy director of Central Hospital, according a newspaper report in Hindustan Times.

Maharashtra Pollution Control Board (MPCB) has taken samples from the nullah and is trying to identify kind of chemical that was discharged into the water. A fire department team said it had managed to wash out most of the effluent from the nullah by the evening.

The incident was reported at Ambernath police station as well as at Central police station in Ulhasnagar. Police say they have tracked down the details of the tanker which had discharged the effluents. They have filed an FIR against unknown persons in this case. The accused have been booked under IPC Sections 277 (fouling water of public spring or reservoir), 278 (making atmosphere noxious to health) and 336 (act endangering life or personal safety of others), said a report in Free Press Journal.

Residents reveal that this is not a one off episode and tankers have been bringing in effluents to the nullah every night for a few years now. The industrial area does not have sufficient effluent treatment facilities and discharge of untreated effluent into waterbodies is the norm.

The episode brings into focus a case filed last year in National Green Tribunal (NGT) by NGO Vanshakti. This group had filed an appeal before the NGT to restore the Ulhas river, which was seeing discharge of untreated effluents from MIDC industrial estates. In May this year, Ulhasnagar Municipal Corporation was warned by the Pune bench of the National Green Tribunal that it will have to stop discharging untreated sewage and effluents into the drinking water source. The tribunal gave three months to the municipal corporation to clean up its act. NGT directed the UMC to divert Khemani nala to avoid discharge of sewage and effluent in the river or water bodies. But the municipal corporation failed to do this and for this, it was hauled up by the tribubal in September, said an article in Indian Express.

UMC informed the tribunal that diverting the nullah is not practical. Instead, the corporation suggested another technical solution that will take at least two years to be completed at the cost of approximately Rs 20 crore. “We can create a sump well and by arresting the flow of the nullah, the polluted water from the nullah can be lifted from the sump well and released near Shantinagar sewage station," stated UMC in an affidavit to the tribunal, said the Indian Express report.

NGT then ordered the MPCB to take stringent action against industries along Ulhas river that continue to discharge industrial effluent beyond admissible limits. A report on this was to be filed in November.