45% people in Sub-Saharan Africa have no access to electricity

For countries which have fairly good access to electricity, there is not enough power being generated 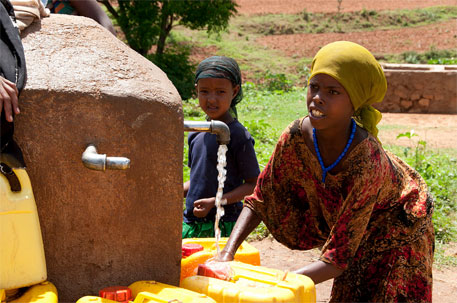 Acute shortage of electricity in the Sub-Saharan Africa has left its countries struggling for economic growth. The energy crisis in the continent was recently analysed by McKinsey & Company in their report titled “Brighter Africa - The growth potential of the sub-Saharan electricity sector”.

Only seven countries—Cameroon, Côte d’Ivoire, Gabon, Ghana, Namibia, Senegal and South Africa—have electricity access rates exceeding 50 per cent. The rest of the region has an average grid access rate of just 20 per cent. Even when there is access to electricity, there is not enough power being generated to reach all.

The analysis finds that countries with electrification rates of less than 80 per cent of the population consistently suffer from reduced Gross Domestic Product (GDP) per capita (as shown in the figure below). 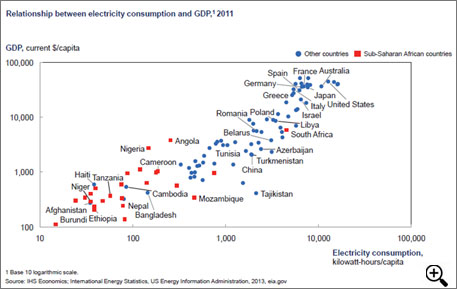 The only countries that have electrification rates of less than 80 per cent (with GDP per capita greater than US $3,500) are those with significant wealth in natural resources. Angola, Botswana, and Gabon, despite falling in that category are not economically prosperous ones. Obtaining access to electricity and consumption are the two most important metrics that can indicate the degree to which the power sector is supporting national development.

The report projects that Sub-Saharan Africa will consume nearly 1,600 terawatt hours by 2040, four times of what was used in 2010. That forecast has been computed based on a number of important factors, including a fivefold increase in GDP, a doubling of population, electricity-access levels reaching more than 70 per cent by 2040, and increased urbanisation. By 2040, the region is expected to consume as much electricity as India and Latin America combined did in 2010. 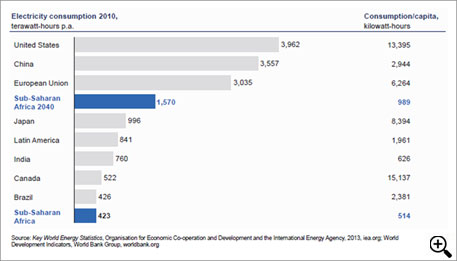