Coal India Limited listed among the top 20. Should the onus of past carbon emissions be shifted to these companies?

Accountability for carbon emissions is long-standing dispute between the developed and developing countries at every UN climate conference—the  poorer nations invariably demand higher carbon emission cuts from the rich nations in view of their higher contribution to the atmospheric carbon. An analysis by Richard Heede at the Climate Accountability Institute in Colorado offers an alternate approach to resolving this dispute.

In his paper, to be published in journal Climate Change, Heede has analysed records of private and state-owned carbon major companies from 1854 to 2010. The paper concludes that 90 companies in the world are historically responsible for 63 per cent or about two-third of cumulative worldwide emissions of industrial CO2 and methane. The top 20 emitters include Coal India Limited. The state-owned Indian company is placed at spot 11, contributing 1.07 per cent of the total global emissions. Chevron of the United States of America, placed at spot one, shared 3.52 per cent of the total emissions historically (see infograph). 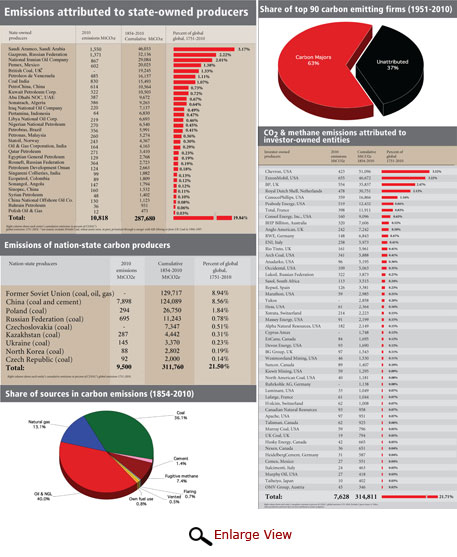 The author suggests that in the absence of a consensus about responsibility in terms of nation-states, an alternate approach can put to the onus on these corporations. Some of these corporations are located in the countries which are not part of Annex I nations of the United Nations Framework Convention on Climate Change (UNFCCC). Annex I consists primarily developed nations which have benefited from the exploitation of natural resources in the past two or more centuries, leaving massive carbon footprint. The countries whose corporations are a part of the top 90 emitters include Saudi Arabia, Venezuela, Mexico, Iran, Kuwait, Abu Dhabi, Libya, Nigeria, Indonesia and Brazil, among others.