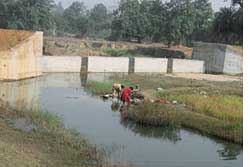 many studies have shown that building a dam increases incidence of malaria in that area. For instance, after the construction of the Bargi dam on Narmada river in Madhya Pradesh, malaria cases in children increased 2.4 times and the annual parasite incidence increased four times in surrounding villages, compared with that ones far off. Stagnant water, needed by mosquitoes, was the culprit.

But researchers from the National Institute of Malaria Research (nimr), a unit of the Indian Council of Medical Research, suggest that this might not be always true. The group found that a small dam in Orissa's Sundargarh district reduced the incidence of falciparum malaria. The group from the field station in Rourkela has been working in the village, San Dulakudar, since 1997. The village is in a forested area surrounded on three sides by a slow moving stream. Due to shortage of irrigation water, people could grow only one rice crop per year and the dam was proposed to offset this shortage. The project was built under the Union government sponsored programme "Sampurna Grameen Swarojgar Yojana." The group used this opportunity to carry out a long term study on the relation between malaria and dams.

The major malaria vector in the area is Anopheles fluviatilis that grows in slow flowing streams. A culicifacies is also present--this vector can grow in a variety of habitats like ditches, irrigation canals and stagnant pools. To see if changes in the environment brought out by the dam could affect the incidence of falciparum malaria, the group studied the incidence of the disease every week between 2001 and 2005.

The nimr researchers compared malaria incidence in San Dulakudar with that in two control villages Pandaripathar and Jagda: these are topographically similar and have the same ethnic population and socioeconomic conditions.

The researchers found that the mean annual malaria incidence in children of 1-5 years age group reduced from 1,304 cases in 2001 to 181 in 2005 per 1000 population. The reduction in the malaria cases was gradual. On the other hand, the incidence of malaria increased from 785 cases in control villages to 1,000. "The construction of dam provided a health bonus in preventing the breeding of A fluviatilis. This in turn brought about appreciable reduction in the malaria incidence," says Surya K Sharma, deputy director, nimr Rourkela, Orissa. "Experience gained in San Dulakudar village regarding the positive effect of a microdam in controlling malaria by reducing the number of the preferred breeding habitats of A fluviatilis should be further extended to other endemic areas with this vector species," the paper published in the August issue of Acta Tropica.

Critiquing the study, Vinod P Sharma, former director, nimr, says, "This is just a limited observation that shows that the breeding habit of the vector in the area has changed. The title is misleading and results should not have been linked to the dam. Chances are that other vectors could increase. Water balance is a tricky business."

But Surya K Sharma says there was no significant increase in the population of the other malaria vector. Also, the researchers did not come across any other vector borne disease that could be linked to the dam. "The study states its limitations that all dams will not exhibit this feature as a number of factors play a role in reducing malaria. In this instance, getting rid of the vector brought down the cases," says Priyanie Amerasinghe of International Water Management Institute, Hyderabad.

Besides, well maintained dams do not increase disease incidence. The Tennessee Valley Project in the us serves as an example. It shows that systematic application of environmental management measures for prevention and control of malaria works.

"The present study is specific to small dams. But the underlying principle of environmental management through properly planned water resource projects, keeping in view the bioecology of prevailing disease vectors and epidemiology of disease, will also apply to larger dams. However, this is seldom done, thereby resulting in creation of an environment becoming more conducive for increased disease burden," says Surya K Sharma.