A book on the history of spices 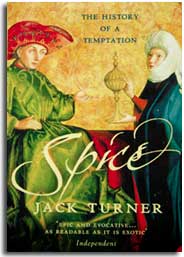 Spice: The History Of A Temptation by Jack Turner Alfred Knopf New York

In this age of handmade-me-down supermarkets, most take spices for granted. But once, the hunt for seasoning was fraught with danger and had the lure of unimaginable wealth.

In Spice, the story of a temptation, Jack Turner tells the story of Europe's obsession with spices. In medieval European households, spices helped set the 'balance' in cooking, offsetting pungent flavours with agreeable ones. The book under review also looks at use of spices as medicine and aphrodisiacs. "A Middle English guide to women's health suggests that three ounces of powdered cloves mixed with four egg yolks will make a woman conceive if God wills, whether it is eaten or applied to the stomach," its author Jack Turner writes.The ailing were given spice concoctions to cure them and authors wove into their works flights of fancy and fantasy that a certain spice could evoke.

But the allure of spice is much older than the Middle Ages. The ancient Romans and Greeks loved a pinch. Turner tells us that archaeologists have uncovered olive pits and black pepper in the camps of Roman legions. Likewise, in England a century or so after Christ, soldiers seasoned their meat with Indian pepper. "The first known consumer of pepper on whom we can hang a name did not use his spice to season his dinner, for he was long past any pleasures of the flesh. He was, in fact, a corpse: the royal skin and bones of Ramses the second, arguably the greatest of Egypt's pharaohs, up whose large bent nose a couple of peppercorns were inserted not long after his death on 12 July 1224 bc," Turner writes.

The historian has taken to his subject with zest and his appetite for unearthing nuggets of information such as this, is boundless. Nutmeg, cinnamon, clove and pepper constitute this history in different ways and at different times. Turner explores the references to spice in literature and mythology from purported medicinal uses to the propensity to use spice as some sort of connection with the divine. But this is no mere compilation of exotica. Turner has looked into the social and religious implications of the spice trade in Europe. The extreme rarity of even the most basic spice, pepper, served to emphasise class distinctions whereby nobility could afford spiced meals and the "lower classes" could not. Elaborate feasts showcasing spices such as pepper and coriander were an indicator of status. At the same time, the clergy sneered at "such lavishing over nothing".

The book begins on an autobiographical note. As a school student in Australia, Turner was fascinated with accounts of the spice trade in Australia. His schoolteacher explained to him "that medieval Europeans had been afflicted with truly appalling food, necessitating huge quantities of pepper, ginger, and cinnamon to disguise the tastes of salt and old and rotting meat". It made sense to the 10-year old. "Our food at school was lousy, but theirs was so dismal that they sailed right around the world for relief," he writes.

The trips were very hazardous and they brought to the victor immense wealth and power. Five hundred years ago, the Portuguese and the Spanish vied for domination of the spice trade in southeast Asia. The desire for pepper, cloves and nutmeg pushed explorers such as Christopher Columbus, Vasco da Gama and Ferdinand Magellan to the limits of human endurance, and in Magellan's case, to his death. The Spanish explorer left home in 1519, going west (as Columbus had done). He left with five ships and 270 men. By the time he had made his way around Tierra del Fuego and into the Pacific, he had lost two ships. Ninety days later, land was sighted.

Eventually spices were slowly stolen, transplanted or simply shipped by royal decree to places other than their native origins. As they became increasingly commonplace, their accounts associated with him became less outlandish. As Turner writes: in the sixteenth century, there were claims that cinnamon covered the water when the Red Sea rose. As time went on, he says, "This sort of thing was sounding increasingly medieval."

Spice the history of a temptation is a delight to be savoured.